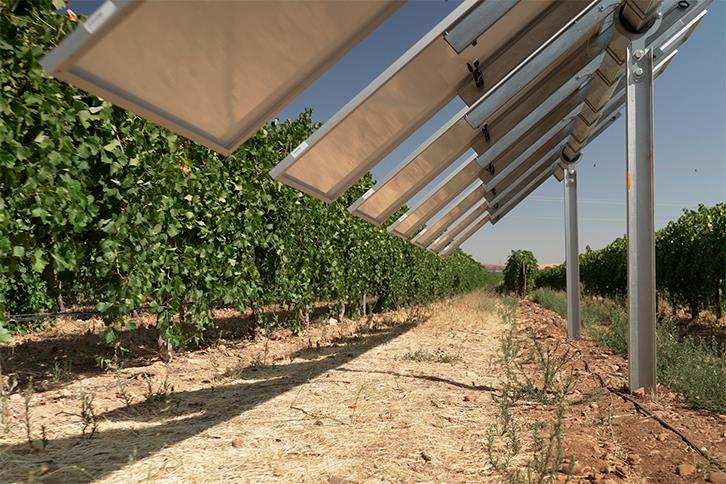 Farm crops have all been solar-powered for millennia. But now, the worldwide thirst for renewable energy is meeting the global thirst for wine in a way that could make vineyards both more productive and more climate-resilient.

On September 29, 2022, the global energy firm Iberdrola commissioned the first smart agrovoltaic (also spelled agrivoltaic) plant in Spain at the González Byass and Grupo Emperador vineyards located in the town of Guadamur, Toledo.

Although it’s just a small array totaling 40 kilowatts, the project is trialing “smart” technology that could revitalize vineyards worldwide, while making them more climate-resilient and economically productive.

This innovative installation allows the layout of the modules to be adapted to the needs of the vineyards, in order to regulate the incidence of the sun and the temperature by means of the shade of the panels.

This test project, called Winesolar, has also involved the collaboration of the advanced technological solutions provider Techedge and the manufacturer of trackers and structures for solar panels, PVH.

The installation will have trackers controlled by an artificial intelligence algorithm capable of determining the optimal position of the solar panels placed on the vines at any given moment.

The degree of inclination is established according to the information collected by the sensors placed in the vineyards, which record data relating to solar radiation, soil humidity, wind conditions and the thickness of the vine trunk, among others.

Thanks to this solution, the installation will help to improve the quality of the grapes, allow a more efficient use of the land, reduce the consumption of irrigation water and improve the crop’s resistance to climatic conditions in the face of rising temperatures and increasingly frequent heat waves.

The production of this pilot plant, with a capacity of 40 kW, will be used entirely for self-consumption by the González Byass and Grupo Emperador wineries, which will thus be able to reduce their emissions, make progress in the decarbonisation of their activity and reduce their energy costs.

This initiative is an example of the positive coexistence of renewable generation with the rural world and the primary sector thanks to agrovoltaic energy, which makes it possible to use the same area of land to obtain both solar energy and agricultural products, in such a way that farm efficiency, competitiveness and sustainability are improved.

Iberdrola will monitor the results of the project over the next year, which will allow it to continue perfecting this innovative system, which it plans to replicate in other vineyards in Spain, which accounts for 13% of the world’s vineyards.

The Winesolar project has been carried out through the Iberdrola group’s international start-up program PERSEO, which aims to facilitate the company’s access to the technologies of the future while fostering the development of a global ecosystem of start-ups in the electricity sector with a focus on sustainability.

This initiative was one of the four selected from more than a hundred ideas received from 32 countries to the challenge set by the company to find new low-cost and environmentally friendly solutions to combine in a sustainable way the deployment of photovoltaic parks and primary sector activities in rural areas.

Iberdrola has consolidated its position as a leading promoter of photovoltaic solar energy, one of the most efficient technologies in the fight against climate change. The company’s commitment to the development of this renewable source will allow it to add 1500 new solar megawatts (MW) in Spain in the coming months.

Iberdrola ended the first half of the year with more than 2,200 MW of photovoltaic power installed in Spain, 800 MW more than the same period last year, representing an increase of more than 55% in the period.

The new capacity has enabled the company to increase its solar production in the country by 125% up to June, to 1,067 GWh. This is an amount that would have required 184 million cubic meters of gas to be generated by a combined cycle.

These figures confirm the company’s commitment to this renewable, inexhaustible and non-polluting energy source, capable of adapting to natural cycles and weather conditions, which offers the advantage of allowing production through both commercial-scale plants and small self-consumption facilities.