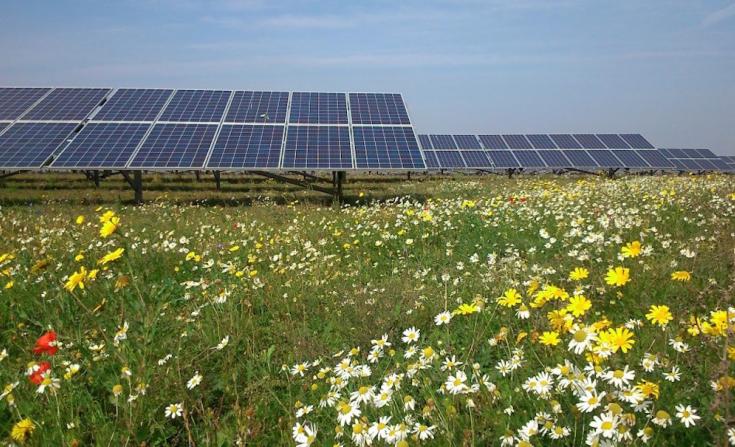 The buzz about the puzzling mass demise of honey bees, monarch butterflies and other crucial pollinators has prompted plenty of personal protection pledges. Now, a movement is afoot to plant these “gardens” at a much larger scale.

The campaign, advocated by Minnesota-based non-profit Fresh Energy, encourages developers of utility-scale solar projects to plant their land with wildflowers, native grasses and other beneficial vegetation rather than gravel or dirt.

Its pitch: Using just one 2,500-acre solar field for this purpose is like planning 750,000 12-foot by 12-foot backyard pollinator gardens — such as the ones advocated by the Xerces Society.

Fresh Energy is far from the first organization to advocate the notion of actually using solar farms or renewable energy generation sites for farm-like activity.

British renewable energy developer Ecotricity, for one, has experimented with ways to turn some of its land back to nature since 2004.

Another developer actively revitalizing habitats alongside solar installations is Solarcentury.

Over the next two years, about 2,500 acres will be turned into solar farms in Minnesota. “Faced with that information, we started to hear that people were concerned these would be industrial sites. They question whether this is a good use of productive soil,” said Rob Davis, director of strategic communications for Fresh Energy.

So far, the developers approached by Fresh Energy have been receptive to the idea, he said.