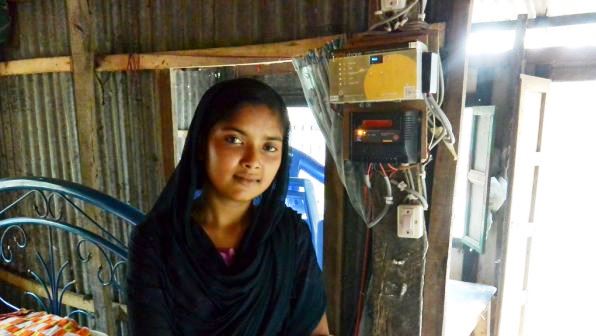 Bangladesh’s population of 160 million makes it about the same as the combined populations of France, Germany, and the Netherlands. The country is also easily the poorest of the world’s 10 most populous nations.

As this is being written, the deadly Cyclone Mora is hitting Bangladesh. It’s the sort of news most people expect from the country, which seems to produce an endless stream of weather-related (mostly floods) disaster stories. That, plus tragic stories of extreme poverty, slavery-like employment, and factory fires.

So, Bangladesh’s recent economic boom is an unexpected good news story from this beleaguered place. According to the Asian Development Bank, Bangladesh’s economy grew by 7.1% in 2016, the fastest expansion in 30 years. It was also the sixth year in a row that GDP growth was greater than 6%. Most analysts expect this run to continue. Ratings firm Moody’s, for example, says the country’s growth is likely to remain “robust.”

Poverty has halved since 2000, meeting an important Millennium Development Goal target. The gender gap has narrowed, and the country has made progress in providing access to health and basic social services. Bangladesh’s rapid growth wouldn’t be so exciting if it didn’t reach the poor. A recent World Bank report (pdf) says that–between 2005 and 2010–the poorest 40% of households saw their average incomes grow 0.5% faster than for the country as a whole.

Another area of progress that has improved the quality of life for many rural folks in Bangladesh is the humble solar home system, comprising (in its simplest form) a panel and battery, has helped millions of families in developing Asia gain access to electricity. In off-grid areas and poor communities, this setup provides a household with enough power for basic needs such as lighting, running a fan, or charging mobile phones.

So, ADB is now partnering with SOLshare, a start-up in Bangladesh that seeks to leverage the vast installed base of solar home systems and upgrade them through so-called ‘swarm electrification’. The system operates similar to a swarm of bees, in that no central intelligence governs the network and a loss of power in one part of the system can be made up by the contributions of others. Also, the loss of any single panel does not undermine the ability of the rest of the ‘swarm’ of solar panels to function.

Instead of individual solar home systems working in isolation, SOLshare’s platform links them together in a peer-to-peer network to create a swarm for solar power production, thereby tapping into un-utilized power from excess solar energy produced by solar home systems. This power can be traded within the community, allowing households with surplus power to earn money by selling it to those families who would otherwise go without energy.

According to the ADB, the major challenges facing Bangladesh now include:

To maintain the country’s economic momentum, ADB has established the following strategic objectives and priorities. ADB will adopt a broad-based approach in order to respond flexibly to the needs and demand of Bangladesh over the country partnership strategy (CPS) period, 2016-2020.

ADB assistance is strongly aligned with the Bangladesh government’s Vision 2021 and its Seventh Five-Year Plan, which lays out a roadmap for higher, sustainable and inclusive growth.

ADB will increase public- and private-sector lending to Bangladesh to $8.0 billion for 2016 through 2020 to help the country build the infrastructure and skills needed for a strong, diversified economy and to strengthen trade links within the region.

In line with the strategies, priorities, and thematic objectives set out in the CPS, 2016–2020, the 2017–2019 program will continue supporting government efforts to diversify the economy for industrial development, transform the rural economy, and develop better rural–urban linkages to ensure inclusiveness.