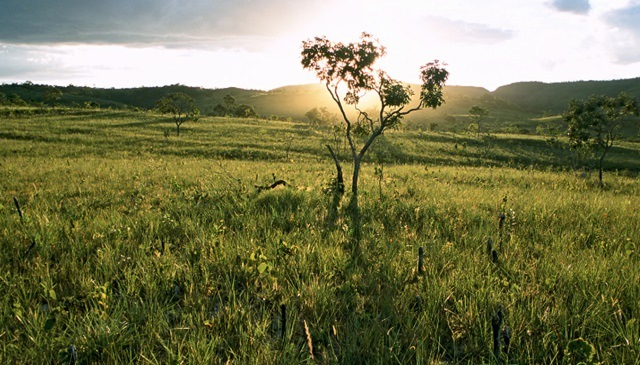 Some damaged ecosystems recover quite nicely all by themselves if the cause of their degradation is removed. Others need a lot of hands-on assistance, which can be quite expensive.

Sometimes, that need for human-assisted restoration is due to the presence of human-introduced invasive species. Other times, it’s because the damaged biome is a “climax ecosystem” that requires many precursor stages to reach. Knowing which is which can save ecological restoration projects a lot of money. Researchers are now working to find out which kinds of damaged ecosystems are most capable (and least capable) of self-repair.

In Brazil, the Cerrado is the world’s most biologically rich savanna. It has over 10,000 species of plants, of which 45% are exclusive to the Cerrado, and it stretches across nearly 500 million acres of Brazil — an area nearly three times the size of Texas.

Some of Brazil’s most important rivers, including the Xingu, Tocantins, Araguaia, São Francisco, Parnaíba, Gurupi, Jequitinhonha, Paraná and Paraguay, rise in the Cerrado, the only savanna in the world with perennial rivers.

This biome is at risk owing to rapid conversion to pasture and cropland, in conjunction with inadequate management of “protected” areas, despite its tremendous importance as a natural resource to a country with the world’s third-largest technically usable hydroelectric potential and where hydropower accounts for 77.2% of the total supply of electricity.

Moreover, destruction of the Cerrado represents an inestimable loss in terms of biodiversity. At the microscale, this biome, containing areas with 35 different plant species per square meter, is richer in flora and fauna than the tropical forest biome. The Cerrado is home to 935 species of birds and nearly 300 mammals, including such endangered species as the Cerrado fox, Giant anteater, Jaguar, Maned wolf, as well as both Marsh and pampas deer.

Scientists estimate that the Cerrado also harbors as many as 10,000 species of vascular plants. More than 400 tree and shrub species are unique to the region.

The Cerrado is known to have significant natural regeneration potential. However, how far does its resilience go?

Brazilian researcher Gisela Durigan, from the São Paulo State University (UNESP), conducted a study with the support form the Sao Paulo Research Foundation (FAPESP). It was performed in old pasture areas, originally part of the Cerrado biome, which currently enjoy “legal reserve” status. They then started a process of natural regeneration.

The scientist explains that natural regeneration of Cerrado’s vegetation is a phenomenon restricted to trees. Which is the same as saying that farming’s damaging effects on Cerrado’s biodiversity is definitive – unless preservation policies can be perfected to the point where it will be possible to restore propitious conditions for the abundant ground layer species.

“We discovered that the ground layer, which contains most endemic species, doesn’t regenerate once it’s been destroyed. Therefore, when pasture is simply abandoned, after a time it becomes cerradão, high-canopy closed forest with poor biodiversity,” Durigan said.

The study, whose results published in Journal of Applied Ecology, was conducted as part of the PhD research of Mário Guilherme de Biagi Cava, who had a scholarship from FAPESP, with Durigan as supervisor. It was also supported by a research grant awarded to Professor Milton Cezar Ribeiro and a doctoral scholarship awarded to Natashi Aparecida Lima Pilon.

The research comprehended 29 areas in the state of Sao Paulo surveyed on their vegetation, counting both trees and the small plants (shrubs, grasses, etc.) that make up the ground layer and constitute the greatest treasure of the Cerrado’s flora. Although these 29 areas, with ages ranging from four to 25 years, were located in different regions, they could be ranked in chronological order in terms of their stage of regeneration.

The trees recover because they have very deep roots and have evolved over millions of years, developing the capacity to resprout countless times. You can’t get rid of them even with herbicide,” Durigan said. The shrubs and other low plant cover in the ground layer, however, will have been removed to establish the pasture in the first place and will not grow back owing to invasion by brachiaria, a highly resistant and aggressive exotic signalgrass.

“This grass only disappears when the tree cover is dense enough to provide shade. But when the exotic grass disappears, there can be no regeneration of the original shrubs and bushes, which were completely eradicated by the use of herbicide, as well as by mowing and competition from brachiaria, and don’t tolerate shade,” Durigan said.

To return an area to typical Cerrado, the exotic grass would have to be eliminated by burning combined with herbicide, after which native species could be reintroduced. However, this process is costly and operationally difficult, and it would not be feasible on a large scale with existing resources.

“We’ve researched different techniques to promote regeneration. With seeds, you need a huge amount, so many there wouldn’t be anywhere to extract them from. What worked very well on an experimental scale was transplanting shrubs and herbaceous plants to recreate the ground layer, accompanied by native grasses and bushes,” Durigan said. “The main problem is that there are no more source areas for this in São Paulo State. The only open Cerrado remnants left have been invaded by exotic grasses, so when you transplant the ground layer you get the brachiaria too. This happens even in protected areas.”

The study conducted at UNESP led to a diagnosis and predictions. Typical Cerrado, once degraded, does not regenerate spontaneously. Pasture can be returned to typical Cerrado with rich biodiversity, characteristic flora, and habitats for wild animals that specialize in savanna only by human management: the tree density cannot be allowed to exceed 15 square meters per hectare, exotic grasses must be eradicated, and native plants must be reintroduced to form a ground layer.

Evolving spontaneously without management, tree cover in abandoned pasture will become cerradão in an estimated 49 years. The sparse ground cover typical of cerradão is completed in four years, and the poor biodiversity of the herbaceous layer develops in 19 years. “The process is rapid, but the results aren’t what we want. Cerradão is no different from a degraded forest,” Durigan said.

The group will measure everything again in the same areas during the second stage of Cava’s PhD research, which stretch until the end of March, two years after the original study. The researchers expect to determine how much the plant cover, density and biodiversity have increased.

“These precise values will tell us exactly what the regeneration potential is in the different areas and help us identify favorable factors, such as soil type or distance from seed sources and water. All these parameters will be considered,” Durigan said.

The article published by her group, she added, is highly innovative because no one in any other country is addressing the issue of savanna regeneration. “Neither in Africa nor in Australia has there been a process similar to the one we’re experiencing here, with savanna being converted into extensive pasture and large plantations of soybeans, sugarcane or corn,” Durigan said. “In Africa, the savannas are very degraded, but this is due to overgrazing, firewood extraction and other activities with less visible impacts in the short run. In Brazil, we’re seeing changes that occur overnight.”

FAPESP is aware that the very best research can only be done by working with the best researchers internationally. Therefore, it has established partnerships with funding agencies, higher education, private companies, and research organizations in other countries known for the quality of their research and has been encouraging scientists funded by its grants to further develop their international collaboration.

Photo of Brazilian cerrado savannah courtesy of The Nature Conservancy.