Upon invitation by Urban Art Paris, the famed modern Spanish artist, Okuda San Miguel, has brought the exterior of the historic Chateau de La Valette to life in dramatic fashion. The late XIX century castle is in Loiret, in the central region of Val de Loire. 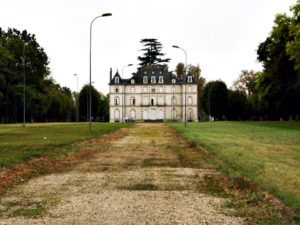 Sitting lonely and forlorn prior to Okuda’s arrival. Photo credit: Orionx via Wikimedia

Between July 2-6, 2017, during the LaBel Valette Festival in Pressigny-les-Pins, he created “Skull In The Mirror” on the walls, giving a new lease of life to the again castle. Bought by Spanish Republicans in the 1930s, it then became part of the U.S.-backed dictator Francisco Franco regime during the bloody Spanish Civil War.

La Valette was later repurposed as a school, and then as a vocational center for children after that. By 1986 it became progressively abandoned until 2012, when the local town hall and a private company acquired it.

Okuda was born in Santander, Spain on November 19, 1980. His work can be classified as pop surrealism with a clear essence of street art or urban art. His artwork is composed of geometric prints and multicolored ephymeral architectures that help blend with grey bodies and organic forms.

These pieces of artwork often raise contradictions about existentialism, the universe, the infinite, the meaning of life, and the false freedom of capitalism. They help ignite conversations about the clear conflict between modernity and our roots.

Okuda began his career as a street artist by painting in old factories and lost railways in 1996. Since 1997 his works have been recognized on roads and the factories in Santander. By 2009, his work hit a major point in his career. He had an opportunity to tour with IAM project doing gallery shows in New York City, Berlin, London, and Paris that helped him obtain new and more mature audiences. His work also had a more personal emotion.

After his latest visit to Paris – in which he painted the facade of a 19-story building with a renewed version of Da Vinci‘s famous Giaconda and also designed a trampoline above the River Seine marking the Parisian candidature to host the 2024 Summer Olympics – and his previous artistic works in Metz and Angers, Okuda has returned to France, curated By Night Gallery and Ink & Movement, for a new project embedded with history. 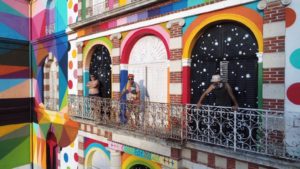 Okuda San Miguel (in the middle).

Okuda took inspiration from the history and surroundings of this place to create a unique project capable of transmitting a message of hope to the world. Something that connects with the contemporary vision inspired in classic art and later reinterpreted in the Renaissance is what this Spanish artist has been developing in recent years from his colorfully unique and universal perspective: through geometric structures, multicolored patterns and oniric scenes, and as part of his continuous reflection on our contradictions, yearnings, intuitions, and beliefs.

Okuda’s art can be classified as Pop Surrealism with an important influence of public spaces in his work as a muralist. A lengthy investigation, both in formal and in conceptual levels, achieved in many journeys and by contacting different environments that ooze the universal elements of his work.

“In this more mature period of my career, to travel and transform spaces around the world is one of my main sources for inspiration. The feedback with other cultures makes me feel alive and that is reflected in my creations, always with a positive look,” Okuda says.

Unless otherwise credited, all photos are by ChopEmDown, with permission.