Bao’an District is one of the six districts that comprise Shenzhen, a major city in Guangdong, China. Formerly known as Bao’an County, Bao’an district was established in January 1, 1993. In 2010, it was included in the Shenzhen Special Economic Zone and rapid development resulted.

The district had a population of 2,736,500 in 2014. About 85% of Bao’an’s population are migrants from other parts of China. Bao’an has traditionally been considered a dangerous place, with high-profile abductions, robberies, and other violent crime. But in the last 4 years, the situation has improved, thanks both to increased police presence and a revitalized economy.

Now, in May of 2017, LAGUARDA.LOW Architects, based in New York City, was awarded first prize in an international design competition sponsored by the OCT Group. The focus was OCT Bao‘an, massive new waterfront redevelopment project in the Bao‘an district of Shenzhen, China. 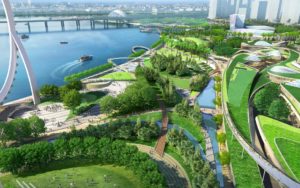 Boasting spectacular views of Qianhai Bay, Laguarda.Low has designed and planned the revitalization of a 128-acre site and creates dynamic spaces for business, retail and entertainment.

As both Master Planner and Master Architect for the project, and in collaboration with renowned landscape design firm SWA, the LAGUARDA.LOW Architects’ design integrates nature, recreation and culture into a new urban setting. The site is divided into four primary zones, connected by pedestrian paths, integrated waterscapes, and landscaped promenades. The four zones include a new Urban Business District, a multi-level Retail Park, a Culture Heritage Park, and a Book Market. 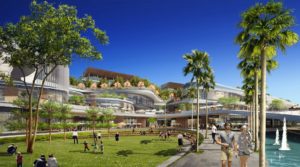 “We are very proud to have been selected to design such a dynamic development that will incorporate the Laguarda.Low vision for this location,” states John Low, Principal of LAGUARDA.LOW. “OCT Bao’an is an outstanding development and we’re confident that this project will complement the evolving neighborhood in one of China’s most important cities.”

LAGUARDA.LOW’s plan positions a multi-level retail village at the center of the site, surrounded by four residential towers to the northeast; three office towers to the southeast; a hotel to the south; an indoor mall to the west; and a new performance hall and an exhibition facility to the north, across from the city’s green belt. A central loop connects the zones and provides access to parking below. 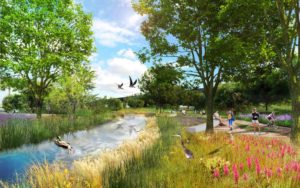 The office buildings serve as a captivating backdrop to the waterfront development and frame the sloping, landscaped-formed retail park to the east, providing direct access to the waterfront. Large domed skylights merge the line between indoor and outdoor spaces. The four-story design elevates the traditional shopping experience with expansive natural light, dynamic circulation and expansive green spaces.

At the north end of the site, the Cultural Heritage Park provides numerous options for leisure and entertainment, including a retail center and pedestrian paths leading to an open-air plaza and a performing arts center next door. Water serves as a key element of the design by separating the various aquatic activities and creating a sense of discovery among spaces where visitors can explore the waterfront promenade and excursion boats, as well as a new Cultural Heritage Center, X Sports Park, playground, food and beverage garden, and performance amphitheater. 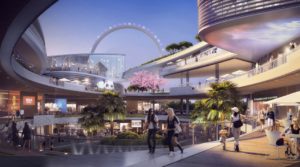 The Book Market is situated on the eastern parcel of the site, adjacent to a new library and youth center. The subterranean space houses a multi-level bookstore and food hall with direct connections to the subway and the neighboring youth facilities. Above the structure is a landscaped park that surrounds a dramatic skylight and space to appreciate the natural beauty and tranquility of the outdoors.

“Our firm is honored to again be working with OCT Group, and add to their impressive roster of 21st century developments,” said Pablo Laguarda, Principal of LAGUARDA.LOW. “We are dedicated to contributing the highest quality design to Shenzhen’s growing business and entertainment districts, and OCT Bao’an will showcase our shared passion for design that does the utmost to enhance the surrounding environment.”