History is in the remaking in St. Louis, Missouri’s oldest district, as work to transform the former Metro Transit headquarters building ramps up, and Laclede’s Landing’s prepares to welcome the Peper Lofts as its first multi-family residential development. 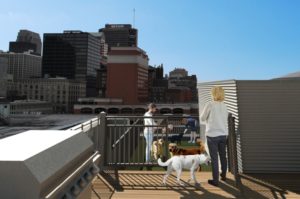 Upon completion later this year, the repurposed 120-year-old building will deliver 49 incredible apartment homes with dramatic views of the recently completed Gateway Arch grounds, the Mississippi River and the downtown St. Louis skyline. A key highlight of the redevelopment is a rooftop sundeck with clear glass safety railings, which will offer almost 360 degrees of unobstructed views.

“The Landing has long been known as a great place to dine and play, and over the years it has become home to a diverse mix of businesses, but this latest addition is adding a whole new dimension to St. Louis’ only riverfront entertainment/dining destination,” said John Clark, president of the Laclede’s Landing Community Improvement District. “Now, for the first time ever, The Landing will be a place to live, work and play, offering a truly unique lifestyle experience.”

The apartments will be located on floors three through six and feature impressive ceiling heights ranging from 10.5 feet to 18 feet, depending on the floor. Historic timbers throughout the building are being preserved and will be a focal point in the individual units themselves as well as in the common areas. Open concept floor plans will facilitate easy flow within the apartments and ensure maximum exposure to the premium views. Residents will appreciate custom concrete floors, designer cabinetry, Quartz countertops, high end appliance packages, remote thermostatic controls and the in-unit washer and drier. 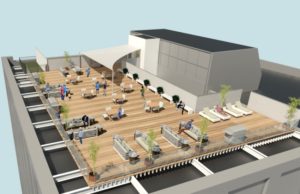 The rooftop sundeck will offer multiple areas for lounging and gathering, grill stations, and even incorporates a designated area just for residents’ dogs. Additional amenities include keyless security and controlled access parking, while the building’s first floor will feature a coffee bar, fireplace lounge, professional workout facility and a business center.

The building itself is just steps away from the new north entrance to the renovated Gateway Arch Grounds, the St. Louis Riverfront Bike Trail, Lumiere Casino, the MetroLink Station and more than half a dozen existing local eateries, with more set to open over the next few months.

Ranging in size from 650 to 1,100 square feet, the building will feature a mix of 23 two-bedroom, one-bath units and 26 one-bedroom, one baths. In all, there will be 13 different floor plan options available. Rents will initially range from $900-$1,450 based on unit type, floor level and specific views. Pre-sales are set to begin by the end of April. The first display units should be available for viewing by July 3rd, right in time for the Arch grounds and Landing to welcome tens of thousands of people as the renovated Gateway Arch Museum opens and the popular Fair St. Louis returns to the Riverfront.

“The Peper Lofts will be the perfect combination of modern living and rich history and will contribute to the overall revitalization of Laclede’s Landing that appears to be well underway,” said Brian Minges, president of Advantes Development. “While our project may be the first large-scale residential development on The Landing, we’re confident that it will be the first of many as other developers recognize what an incredible riverfront location this is and join us in making this nine-block area one of the city’s most sought after residential communities.” 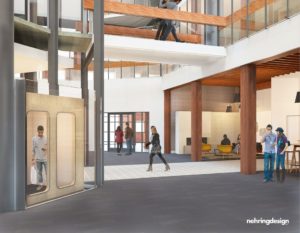 Upon completion, 701 N. 1st Street will also be home to Abstrakt Marketing, which already occupies the building next door and will be taking the entire second floor in the renovated building, connecting it to their existing space to create a contiguous office footprint. Advantes is also in negotiations with potential tenants for the two remaining commercial spaces, which include 5,000 square feet on the south side of the first floor and 4,000 square feet on the lower level, which would be ideal for a casual dining space.

Besides being downtown St. Louis’ oldest district, Laclede’s Landing is the city’s only riverfront entertainment/dining destination, since most of the urban area was isolated from the river during decades of poor planning and engineering (mistakes that are now being rapidly corrected). The nine-block area now features unique restaurants, bars, and nightclubs as well as a variety of attractions, and businesses.

On June 14, 2018, Laclede’s Landing teamed up with Great Rivers Greenway to host an Open House featuring information from a variety of businesses and attractions that are investing nearly $20 million in transforming The Landing into a must-visit destination. The event was held at VUE, one of the newest venues on Laclede’s Landing. The 5th-floor special event space features floor-to-ceiling windows overlooking the newly renovated Gateway Arch grounds and the Mississippi River, providing those attending the Open House with a spectacular setting in which to learn about all the excitement brewing on The Landing. 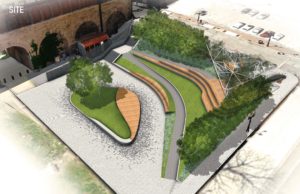 Perched in the shadow of the Gateway Arch adjacent to the Mississippi River, it’s also the perfect base from which to experience the newly renovated Arch grounds, enjoy the return of Fair St. Louis to its original home under the Arch or take advantage of any of the great excursions and amenities along the riverfront, from the Gateway Arch Riverboats and helicopter tours to bike rentals or a stroll along the Mississippi Greenway.

“When we decided to co-host this Open House, we reached out to organizations that have projects planned or underway on The Landing and the many existing venues and attractions already open that are eager to welcome new neighbors and visitors,” said Clark. “We’re thrilled that many of them are participating so the public can have one easy spot to catch up on all the great things happening here on The Landing.” 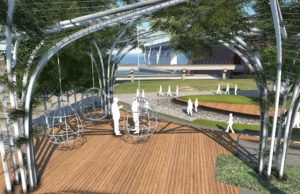 Attendees learned all about Great Rivers Greenway’s plans to develop the Katherine Ward Burg Garden, the first step in the organization’s long-term plan to redevelop the St. Louis Riverfront north of the Eads Bridge and Gateway Arch.

Located along the Mississippi Greenway, this half-acre site featuring stepped terraces, curving seatwalls and an iconic trellis, will provide a place to enjoy views of the Mississippi River, passing trains and the Eads Bridge as part of a uniquely St. Louis experience. Situated adjacent to the Eads Bridge, this will be a wonderful, welcoming spot once people exit the MetroLink at the Laclede’s Landing stop.

Drury Development, which is renovating the historic Witte Hardware Building at 707 N. Second Street to meet the evolving needs of the existing office tenants, while also attracting others who will appreciate the renovated building’s blend of historic details and modern conveniences, along with its exceptional location. 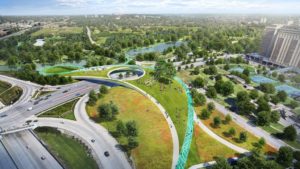 “With the new Gateway Arch Museum opening, and Fair Saint Louis coming back to the Arch grounds, there’s no question that the St. Louis Riverfront will be a hot spot this summer and for years to come, and we’re excited to be continuing our investments there with our latest project on The Landing,” noted Susan Trautman, chief executive officer of Great Rivers Greenway, which recently rebuilt and raised Leonor K. Sullivan Boulevard and extended the Mississippi Greenway from the Biddle Street Trailhead south to Chouteau Avenue.

With more than 120 miles of trails already built, and more on the way, the Great Rivers Greenway is making the St. Louis region a more vibrant place to live, work and play by developing a regional network of greenways. (See earlier article about it in REVITALIZATION.) Great Rivers Greenway is the public agency collaborating with partners and communities to build, care for and bring to life your network of greenways, creating healthy habitats and watersheds along the way.

All renderings of Peper Lofts courtesy of Nehling Design.