On December 16, 2022, Ohio Governor Mike DeWine and Lt. Governor Jon Husted announced $88 million in state support for 123 brownfield remediation projects that will help clean up hazardous and underutilized sites throughout the state.

“Revitalizing these properties can transform the landscape of a local community,” said Lydia Mihalik, director of the Ohio Department of Development.

“By investing in these sites, we allow communities to turn them into something that is worth noting, visiting and a highlight to the local area,” she added.

The Ohio Department of Development is funding the awards through the Ohio Brownfield Remediation Program, which is designed to clean up and prepare hazardous brownfield sites for redevelopment. 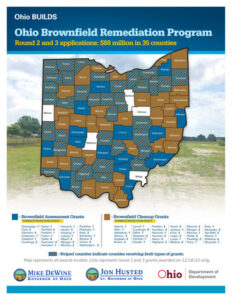 These projects will impact communities in 35 counties across the state.

“Our goal is to create opportunities and make a positive difference in the lives of Ohioans,” said Governor DeWine. “Removing these eyesores and cleaning up blighted properties will help make way for new and exciting opportunities in our state.”

These grants are in addition to the $60 million in Ohio Brownfield Remediation Program grants awarded in April and $192 million awarded in June.

In total, the DeWine-Husted Administration has invested nearly $350 million in funding through the program to support 313 projects in 83 counties.

“Not only are we removing hazardous materials and blight through this program, but we’re removing barriers to future development,” said Lt. Governor Husted. “Communities are one step closer to building great development sites in their regions.”

The funds awarded will help assess and clean up industrial, commercial, and institutional brownfield sites that are abandoned, idled, or underutilized due to a known or potential release of hazardous substances or petroleum.

These new grants comprise Round 2 and Round 3, and include:

Project Name: Combs Dump Site $178,900 Assessment Formerly used for agriculture, the 1.1-acre property is now covered with various types of waste, including asbestos-containing shingles, 55-gallon drums of potentially hazardous material, putrescible waste, and construction and demolition debris piled up to 20 feet high. Numerous trailers and heavy equipment are abandoned on the property and filled with waste. A Phase 2 assessment will be completed to collect soil samples to determine the extent of contamination. After assessment and any needed cleanup, the site will be available for development of proposed business operations.

Project Name: Anthony Wayne School $224,400.00 Cleanup/Remediation Formerly the Anthony Wayne School, the building has been vacant since the school closed in 2012 and has fallen into disrepair. Asbestos is present throughout the buildings and must be remediated prior to redevelopment. Funds from the Brownfield Remediation Program will assist with asbestos remediation. After cleanup, the county hopes to redevelop the site as a space for the community. The Brownfield Remediation Program was created with support from the Ohio General Assembly in the current operating budget. Funding for the program was first come, first served with a $1 million set-aside for each county. With today’s announcement, all funds have been awarded. Counties that did not receive funds did not apply.

Project Name: 54 West Lincoln $218,634 Cleanup/Remediation Constructed in 1870, this building was a personal residence until approximately 1915 and later served as the chapter house for the Beta Theta Pi fraternity at Ohio Wesleyan University from 1915 to 1961. It was a nursing home from 1963 to 2008 and has been vacant since. In addition to the original home, there is a wrap-around addition built in the 1970s. After the removal of asbestos, the owners plan to demolish the addition and restore the original structure to a single-family residence and home offices for businesses.

Project Name: 338 Second Street $32,848.00 Assessment The building at 338 Second Street in the village of Gallipolis was most recently used as an antique store with an apartment above. Currently, the building is in a state of disrepair. The county plans to conduct environmental assessments of the property with the intent to develop on the site.

Darke County Board of Commissioners

Project Name: Warren Sunoco $187,000.00 Assessment Originally built in 1944, the site operated as a Sunoco gas station until the mid-1990s and has been vacant since. Nine underground storage tanks were removed in 2007 and additional assessment is needed to determine the level of contamination. Funds from the Brownfield Remediation Program will assist with soil sampling, well monitoring, and soil vapor testing.

Project Name: South Avenue & Kuhlman Drive Fill Area $7,014,327.00 Cleanup/Remediation The 11.78-acre property was primarily utilized for landfill operations between 1950 and 1957, though various owners have occupied the parcels on this property throughout the years. The City of Toledo assumed sole ownership in 2017. Remediation will include acquisition of three properties comprising the land, soil remediation, vapor mitigation, and infrastructure improvements to allow for economic development in the future. Future plans will include the Lucas County Solid Waste Management District developing a residential curbside recycling facility on a portion of the land and a full-service single-stream materials recovery facility.

Project Name: Medina – Twin Pines $32,647.50 Cleanup/Remediation Built in 1900 as a residential home, this site later housed the Waite and Sons Funeral Home. The property was later converted to office space and has been vacant for the larger part of a decade. Funds from the Brownfield Remediation Program will assist in preparing the site for demolition and redevelopment, including an asbestos study. After remediation, the owner plans to construct a new, mixed-use development on the site with first floor commercial space and residential units above.

Project Name: Former Beallsville School $615,300.00 Cleanup/Remediation Constructed in the 1920s, the property operated as a school for nearly a century prior to closing in 2011. The building is currently in disrepair and is recommended for demolition. Remediation activities at the property include abatement of asbestos, demolition of the building, capping of utilities, and erosion control and restoration. After cleanup, redevelopment of the site will be focused on community-based uses, such as outdoor recreational use or a multi-purpose building.

Photo of the closed (due to asbestos contamination) Anthony Wayne High School courtesy of the Waterville Historic Society.