On December 19, 2020 in Connecticut, Governor Ned Lamont announced that the State Bond Commission had voted to approve $3.77 million for the next phase of the Cherry Street Lofts brownfield remediation and redevelopment project in Bridgeport.

“New life and energy are being breathed into this neighborhood, and it’s creating a lot of promise of significant business opportunities for local residents, and a thriving community to attract local entrepreneurs, residents, and ongoing growth,” State Representative Antonio Felipe (D-Bridgeport) said.

Investigation, remediation, and abatement of contaminants from the environment is critical for Phase III of the project’s development. These including building much needed supermarket and retail space, which is estimated to create a 250 new, permanent jobs in the neighborhood.

“The Cherry Street Development is becoming a major economic catalyst, helping transform Bridgeport’s image and creating a more active West End community,” State Representative Steve Stafstrom (D-Bridgeport) said. “This project is exactly the type of public-private partnership in which the state should be investing. I thank Governor Lamont for recognizing the impact this funding will have in creating jobs and growing the tax base.” 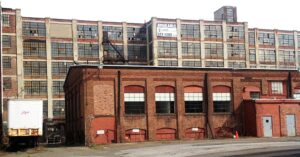 The Cherry Street site – before.

“We are humbled by the support of Governor Lamont and our community leaders as we continue to make progress,” the project’s developers, Gary Flocco and Geof Ravenstine said. “We are proud of our team for what we have accomplished, and eager to continue contributing to a revival of the West End.”

“Cities and towns are struggling, providing education and everything that must be done for so many groups and individuals in our community as we respond to their needs during the COVID-19 public health crisis,” he continued.

As a result of the fuel cell power, the neighborhood is becoming more resilient, improving the environment, and lowering tenant utility costs by taking itself off the grid.

“These bond funds will help make living in the West End safer and healthier for future generations,” State Senator Dennis Bradley (D-Bridgeport) said. “It’s great news for the City of Bridgeport. Governor Lamont deserves credit for his commitment to Bridgeport.”

“I thank Governor Lamont for his continued investment in Bridgeport,” State Representative Chris Rosario (D-Bridgeport) said. “Projects like this will help transform our city.”

Phase I of the project saw construction of 157 residential units for families earning between 50 percent and 70 percent of the area median income, and the completion and opening of the 725-student Great Oaks Charter School.

“Supporting and investing in local economic projects has always been a significant part of my agenda,” Governor Lamont said.

“I visited this project and saw firsthand how transformative it could be for Bridgeport. Between the growth of new jobs and the creation of environmentally conscious housing and transit-oriented development – all within a federally designated opportunity zone – this is just the kind of plan that will keep driving and revitalizing our economy,” he added.

The residential project has had an overwhelming response, with over 9,500 inquiries and has established a waiting list of over 400 people with daily inquiries continuing.

Images courtesy of the Government of Connecticut.