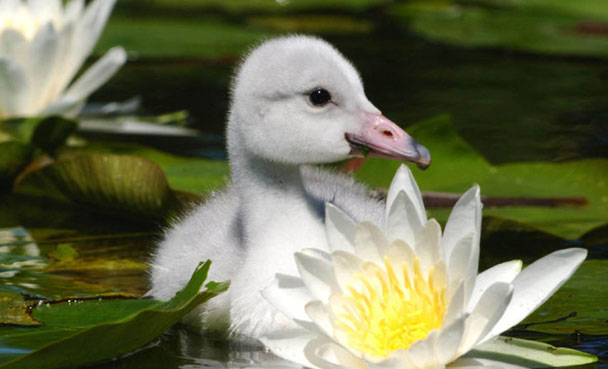 More trumpeter swans will be shipped to the Madison Valley of Montana over the next five years as state wildlife officials continue trying to reestablish nesting pairs on a private ranch south of Ennis. 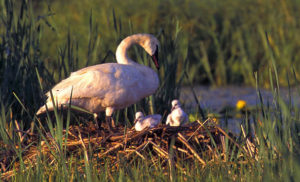 In early August of 2017, the Montana Fish and Wildlife Commission approved the release of five of the big white birds on the Granger Ranches this fall, with similar introductions every year until 2021. Montana Fish, Wildlife and Parks has released trumpeter swans on the ranch each year since 2012, and they want to continue doing so until they see swans nesting there.

Jeff Laszlo, the owner of the ranch, said there is plenty of habitat for the swans. He has worked to restore wetland habitats along O’Dell Creek for more than a decade. And, over the past five years, he’s seen some success with the swan project.

The trumpeter swan (Cygnus buccinator) is the heaviest living bird native to North America, and is also the largest extant species of waterfowl. Its wingspan can exceed 10 ft (3.0 m). It is the American counterpart and a close relative of the whooper swan (Cygnus cygnus) of Eurasia, and even has been considered the same species by some authorities.

Thanks to unregulated hunting, by 1933, fewer than 70 wild trumpeters were known to exist on the planet, and extinction seemed imminent. Then, aerial surveys discovered a Pacific population of several thousand trumpeters around Alaska‘s Copper River.

Careful reintroductions by wildlife agencies, along with crucial habitat restoration—often led by the Trumpeter Swan Society—gradually restored the North American wild population to over 46,000 birds by 2010. 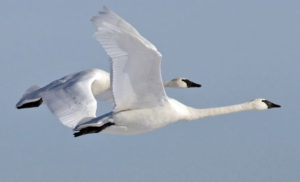 Background information on the Montana reintroduction effort: In 2005, Montana Department of Fish, Wildlife and Parks (MFWP) developed a Comprehensive Fish and Wildlife Conservation Strategy (CFWCS; 2005) that has been used to direct conservation efforts and direct attention to specific geographic areas or species that are in greatest need of conservation. This was followed by the 2015 State Wildlife Action Plan (SWAP).

MFWP has worked extensively in this area to address these conservation concerns. In addition, extensive habitat protection and restoration work has been conducted in the Middle Madison valley which has resulted in nationally recognized wetland projects which are now providing quality wetland habitat and offer the immediate potential to increase swan production in the region and to enhance connectivity between flocks. 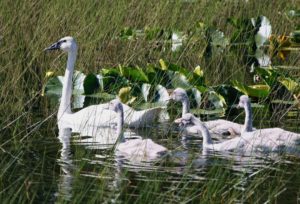 Trumpeter swans historically nested in western Montana Valleys but were extirpated from all areas during European settlement. Trumpeter swans for reintroduction into the Tri-State area (Idaho, Montana, and Wyoming) are made available through a cooperative program with the Pacific Flyway Council, the U.S. Fish and Wildlife Service, and Wyoming Wetland Society with Montana FWP being one of three state conservation agencies that are committed to implementing the Trumpeter Swan Implementation Plan developed by the Pacific Flyway Council. Its aim is to address the slow growth in the number of trumpeter swans breeding in SE Idaho, western MT, and NW Wyoming. The Madison flock’s restoration would contribute to that overall goal.

Initial restoration work began in 2012, and five years of releases have already taken place. This work proposes a 5-year extension to the established project. Nesting success in similar projects within the State of Montana (restoration work in the Blackfoot and Flathead valleys) have shown that nesting initiates in year 6-7, so we are hopeful that nesting will start in the proposed time frame. We are confident that release birds act as decoys to the wetlands and speeds up natural nesting efforts. The project has been welcomed with huge community support and involves state, federal, and private businesses all working together with non-government agencies and landowners throughout the Madison valley. We will continue to release birds at the O’Dell Creek Headwaters wetlands south of Ennis, Madison County, Montana, between Quake and Ennis Lakes.

O’Dell Creek Headwaters is an 10,000-acre area with extensive wetlands, spring creeks, streams, and riparian areas on the east side of the Madison River. The proposed release site is currently under perpetual protection by a conservation easement. The O’Dell Creek Headwaters has undergone habitat suitability evaluations by MT Natural Heritage Program ecologists and Department of Environmental Quality as well as biologists from the University of Montana Avian Science Center for six years. Results of these surveys show large increases in breeding waterfowl in the O’Dell Creek Headwaters since restoration began.

In summary, the continuation of the the proposed Madison Valley trumpeter swan restoration project, and the potential to continue to release captive-reared birds to establish a breeding flock in the Madison, will therefore allow MFWP to implement the SWAP and also would allow MFWP to implement the 2002 Pacific Flyway Council’s Rocky Mountain Population Trumpeter Swan Implementation Plan (TSIP) that address conservation concerns for this iconic wetland species and includes a goal to increase the number of breeding pairs of trumpeter swans in suitable habitats. Releases of trumpeters in the middle Madison are expected to result in more trumpeters pioneering wetlands throughout the Madison Valley where suitable nesting areas are available.

Ultimately, these releases are expected to result in establishment of a small breeding flock in the Madison Valley. The proposed project would also Implement the Pacific Flyway Rocky Mountain Population Trumpeter Swan Management Plan (2017) which has a desired objective of 5 nesting pairs in the Middle Madison valley. MFWP presented the proposal to the FWP Commission for tentative approval on April 13, 2017, which then granted the Department permission to move forward with a formal EA and public comment period.

The project was brought before the Commission because MFWP must secure the Commission’s approval when proposing the transplantation of any wildlife while demonstrating that, based upon scientific investigation and after a public hearing, a species of wildlife poses no harm to native wildlife and plants or to agricultural production and that the transplantation of that species has significant public benefits [MCA 87-5-711(1)]. The Commission endorsed the project following its discussion of the proposal.

FWP has been releasing trumpeter swans as part of a Commission approved project since 2012, but proposes to continue restoration efforts for another five-year time frame, 2017-2021, with the goal of establishing a breeding flock of five established nesting pairs in the middle Madison Valley of southwest Montana. The Department aims to increase swan production in the region and to enhance connectivity between flocks within the Tri-state region of Montana, Idaho, and Wyoming.

MFWP will obtain trumpeter swans for release from the Wyoming Wetlands Society facility in Jackson, Wyoming. The reintroduction of captive-reared trumpeter swans into suitable nesting areas is a proven management tool in use in other parts of Montana and neighboring states. Releases are proposed to continue until five breeding pairs are established in the Madison or until monitoring of the program indicates that the project should be discontinued.

Unless otherwise credited, all photos courtesy of the Trumpeter Swan Society.