It’s been launched by Suffolk County Executive Steve Bellone. Suffolk County is the largest of Long Island’s four counties, comprising the entire eastern two thirds of the peninsula, and has a population of over 1.5 million.

But first, a little background on the problem, and on the current state of water restoration efforts.

However, to fully restore the health of the Sound, a cooperative effort focusing on the overall ecosystem was needed. As a result, EPA, New York, and Connecticut formed the Long Island Sound Study (LISS) in 1985, a bi-state partnership consisting of federal and state agencies, user groups, concerned organizations, and individuals dedicated to restoring and protecting the Sound. In 1994, the LISS developed a Comprehensive Conservation and Management Plan to protect and restore Long Island Sound.

“One of the greatest environmental challenges facing our nation and its communities is the protection and restoration of highly productive estuaries,” says Jeff Trandahl, Executive Director and CEO of the National Fish and Wildlife Foundation. 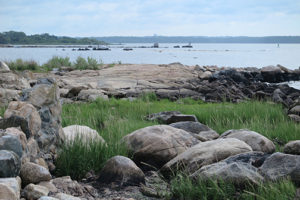 This photo by Judy Preston shows Long Island wetland habitat that was restored via a grant from the Long Island Sound Futures Fund to the Sea Research Foundation, with help from the Avalonia Land Trust and local residents.

The LISS partners have made significant strides in implementing the plan, giving priority to reducing nutrient (nitrogen) loads, habitat restoration, public involvement and education, and water quality monitoring. Funding, though inadequate to the challenge, continues to flow.

On April 11, 2017, the Sea Grant programs of Connecticut and New York awarded over $676,000 in Long Island Sound Study research grants to three projects that will look into some of the most serious threats to the ecological health of Long Island Sound, a water body designated by the Environmental Protection Agency as an Estuary of National Significance.

A bit earlier, on November 14, 2016, 25 grants were announced, totaling $1.3 million to local government and community groups to improve the health and ecosystem of Long Island Sound. The projects, which are funded through the Long Island Sound Futures Fund, will restore 27 acres of habitat, including coastal forest, dunes, and salt marshes for fish and wildlife. This grant program combines funds from the US Environmental Protection Agency (EPA), the National Fish and Wildlife Foundation, and the US Fish and Wildlife Service.

But one of the greatest challenges to all bodies of water on and around Long Island—and to the safety of the residents’ drinking water—is antiquated residential water infrastructure. Over 360,000 homes in Suffolk County rely on outdated cesspools and septic systems that do not treat properly wastewater to remove nitrogen, more than the entire state of New Jersey.

Studies show that nitrogen is, by far, the most significant pollutant of our generation. It has caused declining water quality and resulted in aquatic oxygen levels that are too low to support healthy ecosystems in all three of their major estuary systems. Nitrogen has also contributed to closed beaches and fish kills, as well as brown tide and other harmful algal blooms. Cesspools and septic systems are the largest source of nitrogen pollution.

Until now, this immense challenge has been largely ignored. After all: how does one go about renovating hundreds of thousands of privately-owned homes? Suffolk County Executive Steve Bellone and his team came up with an answer: the Reclaim Our Water initiative, aka the Suffolk County Septic Improvement Program.

On September 8, 2017, Steve Bellone announced that the first advanced wastewater treatment system had been installed under the Suffolk County Septic Improvement Program. The program – the first-of-its-kind in the state – provides financial assistance and incentives to homeowners to fund these systems at an affordable rate. In turn, homeowners play a significant role in reducing nitrogen pollution in our ground- and-surface water on Long Island.

Assemblyman Fred Thiele said: “Suffolk County’s new water quality program is a major step forward in the ongoing public-private partnership to protect and upgrade our waters. Together with New York State’s $2.5 billion water quality improvement program approved by the State Legislature in April and voter approval on the East End of a new water quality component to the Community Preservation Fund last November, thousands of homeowners will now be able to access the financial incentives necessary to upgrade outdated and failing septic systems. I thank County Executive Bellone for his leadership.”

The County Executive made the announcement at the home of Anthony Hobson, the first resident to be approved and install a new HydroAction system. Hobson, a Flanders resident, applied for the program this summer on July 3, and was approved for a grant just eight days later on July 11.

“Today marks a major milestone in our fight to reclaim our water and puts us on the path to ending the water quality crisis on Long Island,” said Bellone. “I encourage all eligible homeowners to take advantage of the financial incentives offered through the Septic Improvement Program so they replace their systems in an affordable manner.”

In July 2017, Suffolk County launched the first-in-the-state Septic Improvement Program to incentivize eligible homeowners to replace their cesspool or septic system with the newer and advanced wastewater treatment technologies. Homeowners can apply for grants of up to $11,000 to offset the cost of one of the new systems, which typically cost between $15,000 and $20,000. An additional $1,000 in grant money may be available for residents wishing to install optional pressurized shallow drain fields, used to improve distribution of wastewater from the systems.

In addition to the grant, homeowners can qualify to finance the remaining cost of the systems over 15years at a low 3% fixed interest rate. The loan program will be administered by CDCLI Funding Corp, with financial support from Bridgehampton National Bank in the amount $1 million and financial commitments from several philanthropic foundations.

Southampton Town Supervisor Jay Schneiderman said: “Southampton Town and Suffolk County have provided the path forward for homeowners to reduce their impact on our waters. For the first time residents of the East End have affordable options to replace their outdated septic systems. I would like to thank County Executive Bellone for his continued leadership on this issue and look forward to building on this success.”

To date, 532 residents have registered to submit an application to obtain grant funding through the program, including 140 who have submitted applications and 79 that have been issued grant certificates for approval. A total of $10 million over 5 years has been appropriated by the Suffolk County Legislature through the Suffolk County Assessment Stabilization Reserve Fund. This equates to $2 million for the first year as well as each subsequent year through 2021. Funding for the grant-based program was made possible as a result of approval by Suffolk County voters of a 2014 referendum that authorized use of funding for nitrogen reducing septic systems.

“This is marks another significant step forward in the County’s aggressive effort to combat nitrogen pollution,” said Deputy County Executive Peter A. Scully. “Thanks to County Executive Bellone’s strong leadership, we are finally making real progress in dealing with a problem that threatens both our environment and our economy, and which has defied all prior attempts at solutions.”

Prior to the launch of the Septic Improvement Program, Suffolk County in 2014 announced its Septic Demonstration Pilot Program to determine which wastewater treatment technologies and systems were most effective in treating for nitrogen. As part of the pilot, 43 Suffolk County homeowners were chosen through a lottery and provided with a free system that included free installation, maintenance and monitoring over five years.

On September 18, 2017, Steve Bellone kicked off SepticSmart Week 2017 by highlighting that Suffolk County has already received nearly 600 registrations by homeowners interested in the Septic Improvement Program. To date, 587 residents have registered to submit an application for the program. In total, 149 residents have completed an application and 87 residents have been awarded grant certificates. Besides Anthony Hobson’s already-installed Advanced Onsite Wastewater Treatment System, there are three additional permits pending.

“Suffolk County is leading the way to replace outdated septic systems and cesspools, and during SepticSmart Week we are all reminded that we all can play a role in helping to reclaim our water,” said the County Executive. “With installations already taking place, the Septic Improvement Program is proving to be a popular, practical and cost effective option to our residents.”

All photos courtesy of Suffolk County unless otherwise credited.