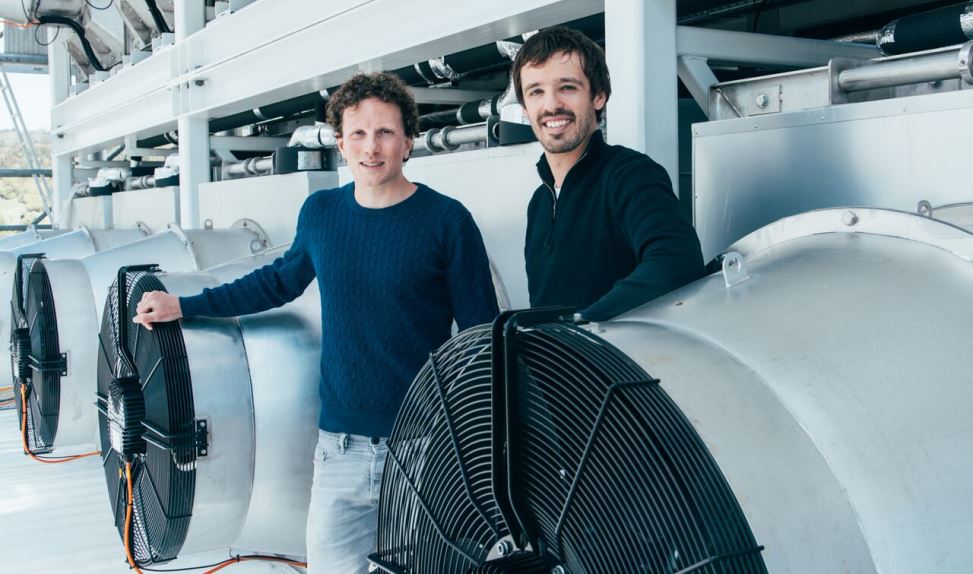 On May 31, 2017, a company called Climeworks launched the world’s first commercial plant that captures atmospheric CO2 for supply and sale to a customer. The Swiss direct air capture company launched the commercial-scale Direct Air Capture (DAC) plant, featuring its patented technology that filters carbon dioxide from ambient air. The plant is now supplying 900 tonnes of CO2 annually to a nearby greenhouse to help grow vegetables. 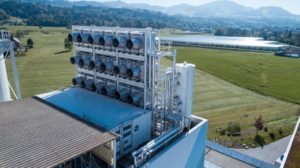 The plant is a historic step for negative emissions technology – earmarked by the Paris climate agreement as being vital in the quest to limit a global temperature rise of 2 °C. Founded by engineers, Christoph Gebald and Jan Wurzbacher, Climeworks developed its technology to capture atmospheric carbon with a filter, using mainly low-grade heat as an energy source. In Hinwil the DAC plant has been installed on the roof of a waste recovery facility – operated by the municipal administration union KEZO – with its waste heat powering the Climeworks DAC plant.

During the Climeworks capture process, CO2 is chemically deposited on the filter surface. Once the filter is saturated, the CO2 is then isolated at a temperature of about 100 °C. The pure captured CO2 gas can then be sold to customers in key markets, including: commercial agriculture, food and beverage industries, the energy sector and the automotive industry. In Hinwil, Climeworks provides a continuous supply of CO2 through an underground pipeline to a greenhouse 400m away, operated by Gebrüder Meier Primanatura AG, to assist with growing vegetables such as tomatoes and cucumbers.

By securing this supply agreement, Climeworks has ensured the Hinwil operation is the world’s first direct air capture plant with a commercial customer – an important step for the future of negative emissions technologies. The Hinwil plant will operate as a three-year demonstration project in co-operation with the partners Gebrüder Meier and KEZO, and with a contribution towards non-amortisable costs by the Swiss Federal Office of Energy (SFOE). 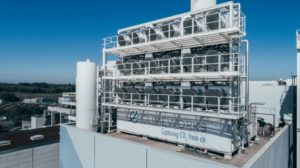 “Highly scalable negative emission technologies are crucial if we are to stay below the twodegree target of the international community,” says Christoph Gebald, co-founder and managing director of Climeworks. “The DAC-technology provides distinct advantages to achieve this aim and is perfectly suitable to be combined with underground storage. We’re working hard to reach the goal of filtering one per cent of global CO2 emissions by 2025. To achieve this, we estimate around 250,000 DAC-plants like the one in Hinwil are necessary.”

The CO2 captured by Climeworks can be used to carbonate beverages or produce climateneutral fuels and other materials. Capturing CO2 locally for industrial uses enables customers to reduce their emissions and lessen their dependence on fossil fuels, as currently most industrial CO2 is transported from fossil point sources via truck to industries on site. In comparison to other carbon capture technologies, a modular Climeworks plant can be employed almost anywhere.

In the coming months, Climeworks plans to launch additional commercial pilot projects in key target markets and wants to test its technology’s potential to deliver negative emissions by combining it with underground storage. “With the energy and economic data from the plant we can make reliable calculations for other, larger projects and draw on the practical experience we have gained.” says Jan Wurzbacher, Climeworks co-founder and managing director.

Climeworks is capturing CO2 from air with the world’s first commercial carbon removal technology, capable of removing 900 tonnes of CO2 from ambient air annually. The direct air capture plants remove CO2 from the atmosphere to supply to customers and to unlock a negative emissions future. 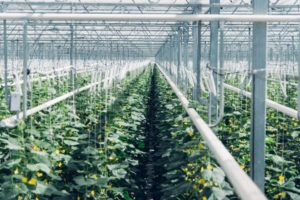 The pure CO2 gas is sold to customers in key markets, including: commercial agriculture, food and beverage industries, the energy sector and the automotive industry. Customers utilize this atmospheric CO2 in carbonated drinks or for producing carbon-neutral hydrocarbon fuels and materials. By using Climeworks’ CO2, our customers can reduce their overall emissions as well as lowering their dependence on fossil energy.

Climeworks’ plants are modular, scalable and can be located independently of emission sources, allowing security of supply wherever there is atmospheric air. Importantly, our plants can be utilised for negative emissions, which will be vital in the quest to limit a global temperature rise of 2 °C. Compared to other carbon removal technologies, direct air capture does not depend on arable land, has a small physical footprint, and is fully scalable.

Note from Storm: As a way for creating industrial carbon dioxide for sale, this Climeworks technology seems to be a good approach, especially when powered by waste, methane from landfills, etc. But as a way to substantially reduce CO2 in the atmosphere, its hard to beat that beautiful technology called “trees”.

In addition to removing carbon from the atmosphere, a tree can provide beauty, shade, nuts, fruits, soil stabilization (such as preventing catastrophic mudslides), storm protection (such as coastal mangroves), wood for furniture or home-building, and wildlife habitat. And it’s 100% solar-powered. And you can’t beat them for scalability: they’re even self-replicating.

All photos by Julia Dunlop, courtesy of Climeworks.