Sydney Fish Market (SFM) in Sydney, New South Wales, Australia is the largest market of its kind in the Southern Hemisphere and the third largest seafood market in terms of variety in the world. A working fish market, SFM sources product both nationally and internationally and trades over 13,500 tonnes of seafood annually – with up to one hundred sustainable seafood species traded every day and approximately 500 species traded annually.

On June 25, 2017, it was announced that the Danish firm 3XN Architects had won the contract to design the $250 million redevelopment and relocation of a the famed fish market, a longstanding local institution at the head of Blackwattle Bay. 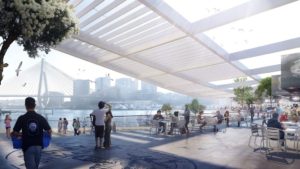 “The brief is to rejuvenate Sydney Fish Market and create a world class food and dining destination on the inner harbour that will be dynamic, sustainable, and sympathetic to the local area,” said UrbanGrowth NSW Head of Projects Portfolio, Barry Mann.

UrbanGrowth NSW said that Copenhagen-based 3XN Architects, in partnership with its innovation unit GXN, was awarded the contract after a competitive process that attracted over 60 registrations of interest from Australian and international design studios.

3XN Architects Creative Director and Founding Partner Kim Herforth Nielsen said the project is a major win for his company. “We are incredibly excited to be working with UrbanGrowth NSW and Sydney Fish Market to create not just an authentic fish market, but an iconic destination for Australia,” Mr. Nielsen said. “We place people at the centre of any architectural response, with an emphasis on place-making to foster a strong sense of community.”

Sydney Fish Market General Manager Bryan Skepper said, “Sydney Fish Market is a beloved institution among Sydneysiders, Australians and international visitors. Therefore, it was integral to select a design team that will modernise and improve the site whilst recognising its longstanding heritage and retaining the authentic experience that attracts customers and visitors. Danish designers delivered the iconic Sydney Opera House and we have great expectations that the Danes will deliver again with an iconic new Sydney Fish Market. We’re inspired by 3XN’s credentials and are excited to work with them to see our redevelopment vision come to life.”

3XN Architects is heading up a design consortium that includes, GXN in charge of sustainability, Sydney firm BVN as executive architect, Aspect Studios as landscape architects, and public art specialist WallnerWeiss. UrbanGrowth NSW expects to have a draft design released for public comment later in the year and aims to commence construction in late 2018.

3XN Architects in a Copenhagen-based studio with more than 30 years’ experience. Among 3XNs high profile projects are The Blue Planet (National Aquarium) (2013), Royal Arena (2017), in Copenhagen, Museum of Liverpool (2011), Quay Quarter Tower (2020) in Sydney. 3XN have had a presence in Sydney for more than three years and the Sydney Fish Market is the company’s third project in the city.

UrbanGrowth NSW is the NSW Government’s city transformation agency. Their ambition is to drive world class urban renewal that delivers sustainable housing and jobs growth and improves the liveability of our urban spaces. They collaborate with our government, private and community stakeholders to deliver projects that create a globally competitive Sydney and NSW.