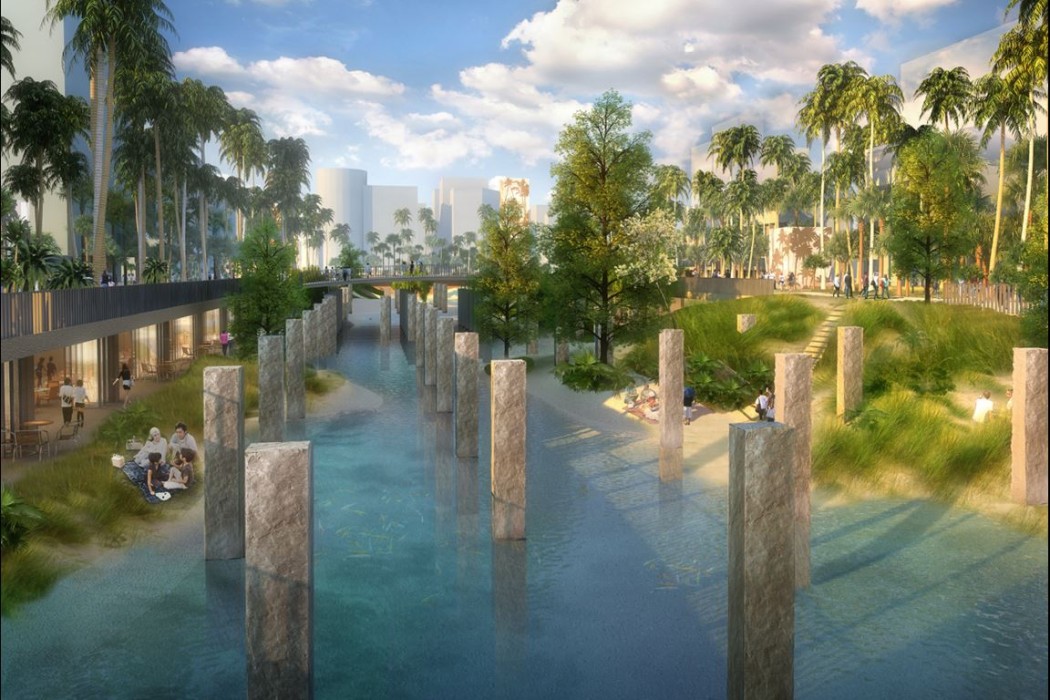 MVRDV‘s design for Tainan Axis creates a connection between the city and its waterfront by removing the China-Town Shopping Mall and replacing it with an urban lagoon.

The connecting streets of the axis are also transformed with new greenery and traffic plans to make the area more pedestrian friendly. The historic relationship between the city and lagoon and also enables people to enjoy an urban but green living space.

The natural lagoons and water network of Tainan, Taiwan served as the city’s base for its marine and fishing industry up until the early 20th century. Land reclamation and a new urban plan devised under Japanese governance saw the city expand rapidly; construction of the New Tainan Canal and Tainan Ship Moorage moved the shipping and fishing industry further inland which saw a lively neighbourhood of auction and trade markets flourish around it.

China-Town Mall was built next to the canal in 1983. A large commercial structure of little architectural quality, it disconnected the city from its waterfront and soon fell into decline, becoming like the rotten tooth of downtown Tainan.

The transformation of China-Town Mall and its perpendicular axis Haian Road, which together form the T-axis, aims to re-establish the waterfront connection and provide an important stimulus to the redevelopment of the neighbourhood by encouraging the use of public spaces and creating a cohesive urban language. Once dismantled, the exposed structure of China-Town Mall will form the base for the new public square, a lush, green lagoon with dunes and playgrounds flanked by small commercial units such as kiosks selling souvenirs, a tourism info point, a teahouse and a gallery.

New transport nodes further east of the city center will allow Haian Road to be relieved from its current flow of traffic offering the opportunity to develop the area as a lively public zone with improved spaces and activities.