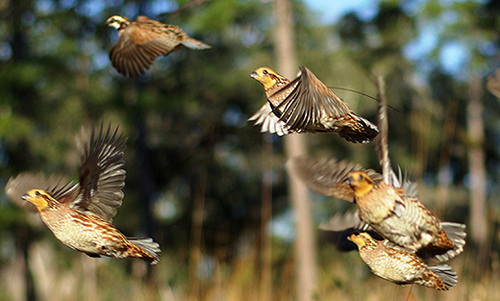 Once a plantation and popular hunting spot, the Tall Timbers Plantation Research Station and Land Conservancy in Tallahassee, Florida, is home to healthy longleaf forests that are filled with a variety of wildlife, including the Northern bobwhite, a type of quail.

When the plantation’s owner, Henry Beadel, died, he willed the land and resources to create a special nature preserve to study the effects of fire on bobwhites, turkeys and other wildlife.

As set out in Beadel’s will, strides have been made in re-establishing the longleaf pine ecosystem – one of the most endangered ecosystems in North America.

Fifty years of prescribed burning on the plantation has restored habitat for bobwhites, as well as many other declining species of birds, reptiles, amphibians and plants. Formerly cultivated lands and natural areas that were never farmed provide benchmarks for restoration studies.

Instead of attracting hunters, people from across the United States and all over the world now travel to the preserve to train in prescribed burning, conduct research, and tour the facility.

Nationally, bobwhite numbers have declined in recent years, with some regions experiencing decreases of up to 90 percent. Loss of habitat is one of the major factors cited for the quail’s decline. Bobwhites depend on edge habitats, such as at the border of a field or along forestland.

But at Tall Timbers, bobwhite numbers are rebounding.