Tampa Heights is one of the oldest neighborhoods within the city limits of Tampa, Florida. Historic buildings in the area include the Tampa Free Library. 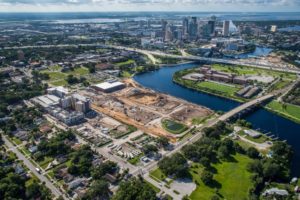 Tampa Heights is bounded by the Hillsborough River to the west, Hillsborough Avenue to the north, downtown Tampa to the south, and Seminole Heights and historic Ybor City to the east, covering some 3.5 square miles.

Tampa Heights is thus in the central part of the city, and has a population of about 17,000. But that number is about to jump, thanks to a beautiful new, historically-sensitive mixed-use redevelopment called The Heights, the first phase of which is scheduled to open in November of 2017. 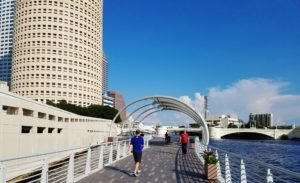 It’s a great example of the 3Re Strategy at work, in that it repurposes and renews the property, while reconnecting it to the downtown via an extension of the gorgeous Tampa Riverwalk.

The site of Tampa, Florida‘s new Armature Works mixed-use redevelopment project dates back to 1910, when the building was constructed and occupied by its first resident, the Tampa Electric Company. 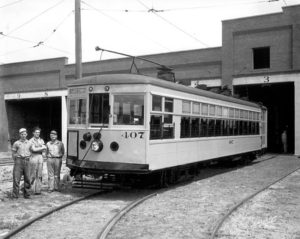 Also known as the TECO Streetcar Warehouse, it played a significant role for the City of Tampa as the repair and storage facility for the Tampa Electric Street and Railway Company (formerly known as The Streetcar Barn). The barn was part of Tampa’s development in connecting the surrounding neighborhoods.

In 1946, the system was abandoned for more modern means of transportation, the automobile. Tampa Armature Works, a phosphate machinery manufacturer, purchased the building from TECO in 1960. Today, the Armature Works still stands and has been repurposed to it’s originality, becoming a mixed-use commercial building. 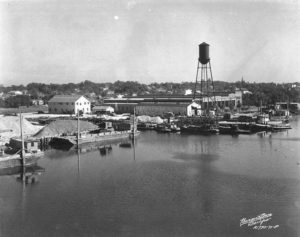 For several years, partners Chas Bruck and Adam Harden of SoHo Capital have been working to create this very special project for Tampa’s waterfront community.

Over time, each necessary piece of the 43-acre riverfront property was acquired, and plans were drawn to create The Heights.

At the epicenter of The Heights is the Armature Works, a 73,000 square foot mixed use commercial space consisting of multiple event spaces, the Heights Public Market, a co-shared workspace as well as multiple restaurant and bars.

Heights Public Market will feature an open floor plan with communal seating surrounded by restaurants featuring the top chefs and restaurateurs in the Bay Area.

This industrial, market environment offers a culinary mixture of prepared foods, meats and cheeses, produce, beer, wine, specialty cocktails, fresh flowers and desserts. The Market will also include a “Show + Tell” workshop that hosts an array of events including cooking classes, candle making and pop-up dinners in collaboration with market tenants.

The inside of the Armature Works features original exposed brick walls, skylights, windows and doors. Even the wood floors have been repurposed from the original wood planks from the ceiling.

The central element of the projects economic viability of the project is the residential component, which when built out will be valued at $820 million. The first element of that will be the Pearl, a 314-unit luxury apartment building that will include 28,500 square feet of ground-level retail space.

More residential dwellings, both rental and owned, will be added in later phases. At buildout, The Heights will have 1,520 units and roughly 3,000 residents, according to the SoHo Capital partners.

The Heights is designed to be vibrant 24/7. “One of the most important things is having districts that are reasonably active throughout the day, throughout the month and throughout the year,” says Tim Clemmons, principal with Mesh Architecture, which designed The Heights’ master plan with Bruck and Harden.

Design-wise, the project is staying true to its century-old roots. Everything down to the fireplaces inside the historic landmark has been completely restored, including the original exposed brick walls, skylights, windows and doors — even the wood floors have been repurposed from the original wood planks from the ceiling.

“Tampa’s innate charm and appealing lifestyle is something locals have long known, but this is finally going to be what makes us stand out as a great city on a national level,” says Chas Bruck. “It will truly be its own urban village that has something for everyone, all centering around one of the city’s most historic landmarks.”

Adjacent to riverside is Atlantic Beer and Oyster Co. (a casual dockside seafood + craft beer spot) and a local outdoor adventure company Urban Kai, which will host various activities including kayaking and paddleboarding. Boat slips will also be available for those arriving via vessel; the community will eventually be home to The Pearl rental units + condos as well as a luxury hotel, with street-level retail at each location.

Perhaps the crown jewel of The Heights? The water tower that Bruck and Harden discovered in Polk County that’s a near-replica of the one that stood on the Armature Works grounds a century ago. Now landmarked for the property, its 175-foot height makes it virtually impossible not to view from any vantage point in Tampa Bay area.

Here are some statistics on The Heights and the Armature Works: 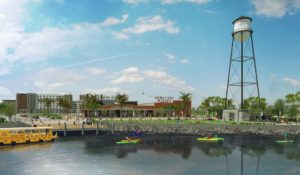 The Heights is actually the entire 43 acre redevelopment project. It won’t be fully complete in November, since it has several phases. What will be complete in November is the epicenter of The Heights: the Armature Works, which houses Heights Public Market, the event + co-working spaces, the two restaurants, Show + Tell, etc.

Armature Works’s well-connected location the Hillsborough River means that it should be a strong draw for both locals and tourists visitors from both local and far whether travelling by boat, bike or car. “This is one of the best sites in the urban core in Tampa,” said Adam Harden, one of the developers. “We think we’ll anchor one end of the Riverwalk, and all the new development coming to Channelside will anchor the other end.”

On Spetember 19, 2017, Tampa-based Heights Community Development District got a financial boost from a $21.5 million tax-exempt bond issue to fund the waterfront community being redeveloped along the Hillsborough River.

Proceeds from the bond issue are expected to fund construction of new roads, sidewalks, the Tampa Riverwalk, parking garages as well as overall infrastructure work associated with the 43-acre development.

Miami-based FMSbonds, Inc., raised the tax-exempt bond financing for the Heights Community Development District, that upon completion will provide 2.3 million-square-feet of urban living space. The bonds are backed by tax increment financing through the city of Tampa.

“The epicenter of this mixed-use development is the historic Armature Works building, which is being transformed into the Heights Public Market, event hall, and co-working space,” says Adam Harden, principal at Tampa-based SoHo Capital. “The Heights project will also anchor the Tampa Riverwalk with a new boutique hotel, new green residences called The Pearl as well as retail and creative office space.”

All images courtesy of Soho Capital, unless otherwise credited.