Craft breweries all around Texas are sponsoring special “Come and Save It” days to raise funds for the Battleship Texas Foundation, whose mission is work in partnership with the Texas Parks and Wildlife Department to preserve, restore and enhance the Battleship TEXAS. Their ultimate goal is to redevelop the historic ship into a premier museum and visitor attraction.

Their current restoration efforts include: 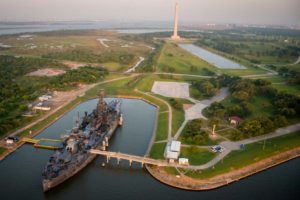 The official name of the ship is the USS Texas, and she was actually the second ship of the United States Navy to be named in honor of Texas. This New York-class battleship was launched on May 18, 1912 and commissioned on March 12, 1914.

Soon after her commissioning, Texas saw action along Mexico’s Gulf of Mexico coast following the “Tampico Affair” (a six-month invasion and occupation of Veracruz to protect the interests of U.S. oil companies operating in Mexican waters.)

The USS Texas made numerous sorties into the North Sea during World War I. 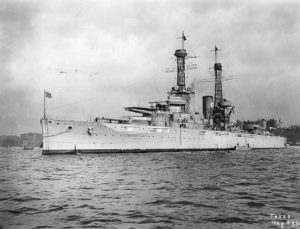 When the United States belatedly entered World War II in 1941, Texas escorted war convoys across the Atlantic, and later shelled Axis-held beaches for the North African campaign and the Normandy Landings before being transferred to the Pacific Theater late in 1944 to provide naval gunfire support during the Battles of Iwo Jima and Okinawa.

Texas was decommissioned in 1948, having earned a total of five battle stars for service in World War II, and is now a museum ship awaiting restoration near Houston, Texas.

By 1983, concerns with the leadership of the Battleship Texas Commission led to the decision by the State Legislature to disband it, turn over control of the ship to the Texas Parks and Wildlife Department (TPWD). 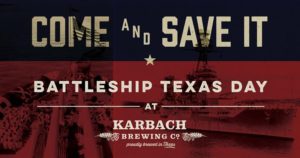 The Legislature allowed the voters of Texas to determine the fate of the ship, and on November 6, 2007, voters approved $25 million in funds to dry-berth the ship to prevent further deterioration from the corrosive waters of the ship channel.

One of the provisions of the bond legislation was the creation of the non-profit Battleship TEXAS Foundation (BTF). They raised $4 million in private funds to supplement the $25 million in bond funds.

A series of near-catastrophic leaks has now motivated BTF to start raising funds to build a dry dock to get the USS Texas out of the water, and to restore the hull with new steel.  That will necessitate the drinking of a LOT of beer, but Texans say they are up to that onerous task.

Photos courtesy of BTF and the Texas Parks and Wildlife Department.