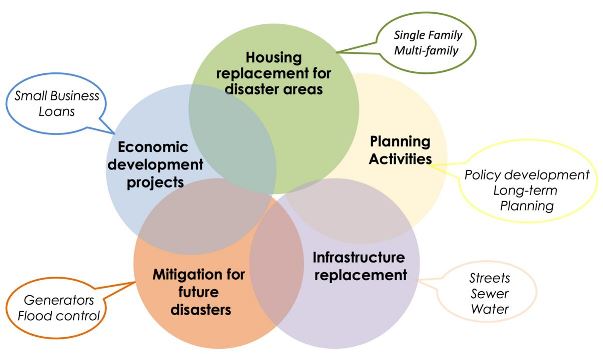 On April 6, 2016, Texas General Land Office Commissioner George P. Bush is pleased to announce that the program which has been known as Disaster Recovery is now Community Development and Revitalization (CDR).

This name change will reduce confusion and more accurately reflect the mission of the General Land Office and what this office accomplishes on behalf of Commissioner Bush for the people of Texas.

“This vital agency has operated for years providing long-term assistance to enable communities to rebuild following disasters such as hurricanes, floods and fires,” said Texas Land Commissioner George P. Bush. “While this is a critical need in our state, the previous name caused confusion that this division of the GLO serves in an emergency response capacity. The new name, Community Development and Revitalization, clarifies that the vital function this team provides is long-term recovery for cities and neighborhoods affected by major events.”

“The previous name facilitated confusion at all levels of government, as it was commonly associated with the immediate, disaster response missions of Federal Emergency Management Agency (FEMA) and Texas Division of Emergency Management (TDEM),” said GLO Deputy Director Pete Phillips.

“This division of the General Land Office is actually responsible for long-term enduring response, community development, and revitalization of impacted communities post-disaster. This change of name is intended to reduce mission confusion and promote the division’s mission of implementing long-term revitalization and community development following declarations of disaster,” he continued.

The Texas General Land Office administers, on behalf of the State of Texas, community development block grant-disaster recovery funds from the U.S. Department of Housing and Urban Development (HUD).

Texas was allocated $3.1 billion for hurricanes Ike and Dolly and $36.3 million as a result of the 2011 wildfires.