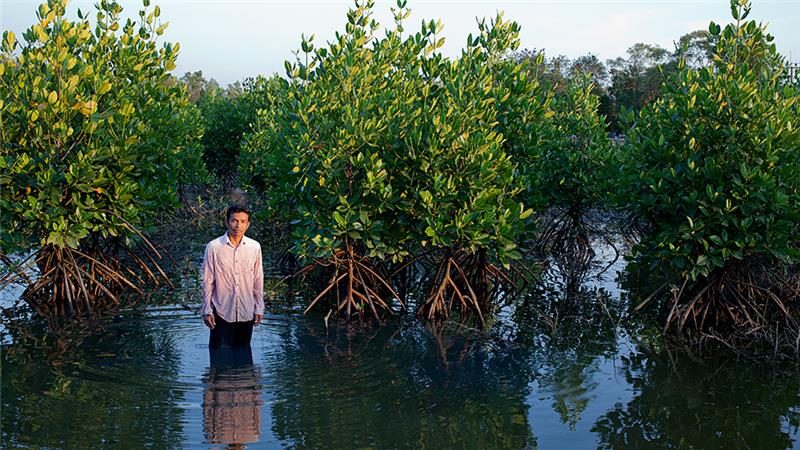 For many years, farmer Noppadol Tawee lived with the constant fear of waking up and finding all the shrimp that were growing in his pond floating dead in the water.

“The shrimp used to get sick, and I lost all of them several times. Some years, I could make a lot of money; in others, I could lose everything,” explains Noppadol, a shrimp farmer living in Kanchanadit, a district in the province of Surat Thani in southern Thailand.

His neighbors advised him that the solution to his problem was related to a very specific kind of tree: the mangrove. Years ago, before shrimp production came to the region, mangroves had covered the coastline of the region, housing dozens of marine animals, including shrimp, small fish and crabs.

Mangroves are known for purifying the waters and working as nurseries for a number of marine species, as well as being huge areas of carbon storage.

But, since the early 1970s, the Thai government promoted semi-intensive and intensive shrimp production, which quickly spread to coastal areas, placing Thailand as the world’s third-largest exporter of seafood and one of the main producers of shrimp in the world.

This rapid expansion came at the cost of thousands of hectares of mangroves, a complex and rich ecosystem comprising different species of trees and a high number of other plants, animals and micro-organisms that grow in coastal areas in tropical regions.

Noppadol’s followed the advice of his community and planted mangroves.

“Since I planted the mangroves in the pond, the shrimp have never died again,” says the farmer, who also stopped administering antibiotics and fertilisers to the water and stopped feeding the shrimp artificial food.

“They get everything they need from the mangroves,” he says.

The International Union for Conservation of Nature (IUCN), a network of several conservation groups, has set alarm bells ringing by warning that more than one in six mangrove species worldwide are in danger of extinction due to coastal development and other factors, including climate change, logging and agriculture.

The current rate of mangrove loss is approximately 1% per annum (according to the Food and Agriculture Organization ( FAO), or roughly 150,000 hectares (370,050 acres) of mangrove wetlands lost each year. 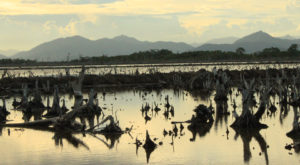 Continuing heavy loss of mangrove forests represents a real tragedy for our oceans and the extensive life-support systems mangroves engender. With climate change and sea level rise upon us, we must look to the mangroves to help turn the tides which these forests can do through their ability to control erosion, buffer against storms, and sequester huge amounts of carbon.

Mangroves may, in fact, be one of our last defenses against the perils of climate change and global warming. The mangrove’s last stand, may well in fact be humanity’s last stand.

The role of mangroves in protecting our coasts against natural hazards such as storms, tsunamis and coastal erosion has been widely acknowledged. Even so, the level of protection provided by mangroves remains subject to debate. Numerous mangrove restoration projects were instigated after the 2004 East Asian tsunami in the belief that replacing lost mangroves would reduce future risk, but others raised concerns that not all of these projects were well conceived, and that some might create greater risks by inducing a false sense of security.

Can mangroves reduce waves and storm surges? How will they influence the forces of a tsunami? Do they actually contribute to stabilizing coasts and build-up of soils? Can they keep up with sea level rise? A rich scientific literature exists describing many of these processes, but careful scrutiny is needed to determine what is known or unknown, and what remains uncertain. 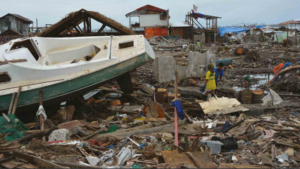 The Nature Conservancy and Wetlands International, together with the University of Cambridge, set out to map the current state of knowledge about the role of mangroves in coastal defense and put the different findings and views in perspective.

An extensive review process yielded three technical reports that describe the extent to which mangroves reduce wind and swell waves, storm surges and erosion and how they build up soils in response to rising sea levels. The conclusion is that mangroves can indeed reduce risk from a large number of hazards.

This practical guidebook summarises the findings of the reviews and provides practical management recommendations to coastal zone managers and policymakers. It helps the reader to assess the risk context in a target area, to define hazard-specific mangrove management interventions and to incorporate these in risk reduction strategies, climate change adaptation protocols and broader coastal development planning. Case studies provide practical examples of mangrove management approaches and references to background information, practical tools for risk assessment and mangrove management are provided throughout the book.

Note from Storm: The global loss of coral reefs is just as alarming as the loss of mangrove forests. What many don’t understand is that reefs and mangroves are interdependent parts of the same ecosystem. The mangroves are nurseries for many reef fish species, and they filter particulate matter from terrestrial runoff that would otherwise smother corals. They also reduce acidity in the water: ocean acidification due to excess carbon dioxide in the atmosphere, which the oceans absorb. That acid dissolves the skeletons of many marine animals.

Now, thanks to farmers like Noppadol Tawee, a regenerative model of shrimp farming is emerging. It could economically revitalize the economies of shrimp-farming communities, make them more resilient in the face of climate change, create healthier, drug-free shrimp for human consumption, regenerate commercial pelagic fisheries, restore ecosystems worldwide, and slow climate change. That’s a model that deserves far more attention and support than it’s getting.

Download report on mangrove restoration by The Nature Conservancy (PDF).