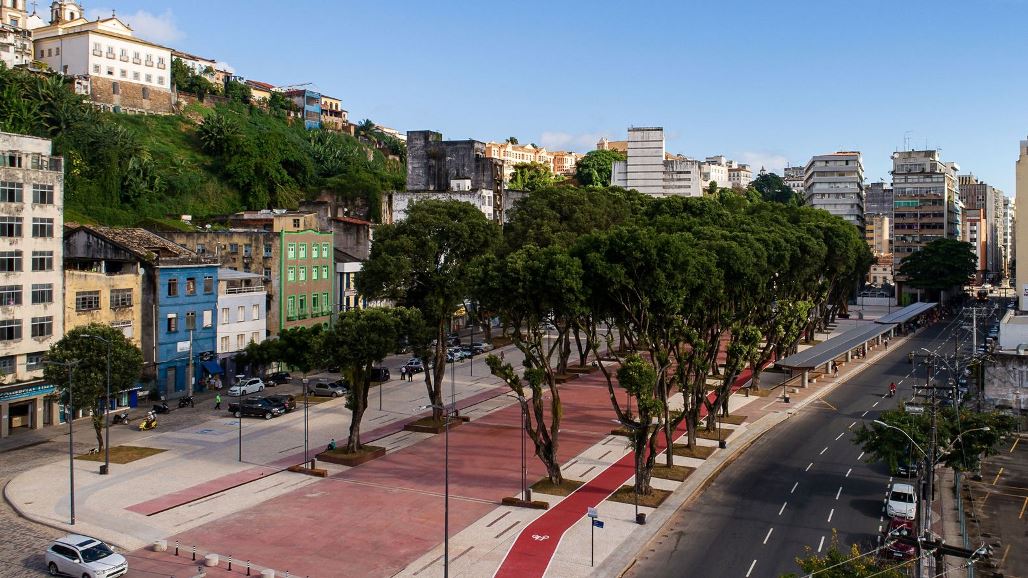 In downtown Salvador, Bahia, Brazil, a public space called Marshall Deodoro Square (formerly known as Dourado Wharf), is located in the port area and commercial district of the city. 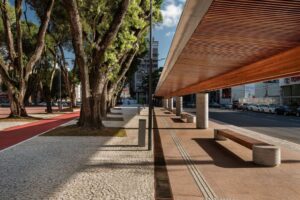 The space has been listed as a heritage site by Brazil’s national historic preservation agency, Instituto do Patrimônio Histórico e Artístico Nacional (Iphan), but it needed to be renovated, both to beautify a run-down public amenity, and to modernize access to public transit.

Locally-based Sotero Arquitetos took on the design of the renovation, seeking to preserve its original landscape composition while modernizing the outline of the public equipment.

The project’s main goals were to preserve the great Licania tomentosa trees, which sit along three distinct lines, as well as to define a new, revitalizing use for each sector of the public square.

Here’s how the designers at Sotero Arquitetos described their approach: 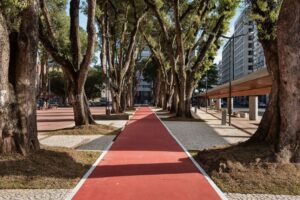 The civic center took up the central portion, represented by a great esplanade featuring red concrete flooring, which resembles a solemn public carpet that serves as a stage where all types of public demonstrations take place.

Last, but not least, the inner portion of the square, closer to the surrounding residential area, features a linear platform that came about thanks to the removal of a large private parking lot, in order to give rise to a leisure space. 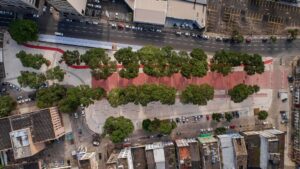 The bus stop design proposes a structure composed of concrete and glued laminate wood, whose columns feature the same cross-section and spacing as the pilotis that support the neighboring modernist buildings, thereby preserving the legacy via a new use of said architectural elements.

The bike path is bestowed a scenographic character as it permeates the tree lines that function as a massive protected passageway.

Lastly, the urban furnishings, essentially designed in red granite and wood, are strategically positioned to allow for contemplation of the space as well as to free up the central esplanade.

All images courtesy of Sotero Arquitetos.