Since 2014, the Sonoma and Mendocino coast of has lost 90% of its bull kelp forest due to climate change. Interestingly, the restorative solution to the crisis may involve eating purple sea urchin.

The Mendocino coast is a rugged stretch of Northern California. Redwood trees tower above fern understories with streams running through them, pouring down waterfalls into ocean coves filled with wave-worn boulders. The glorious views from Highway 1, a two-lane road that serpentines along this roiling coast, tell little of the environmental disaster occurring underwater. 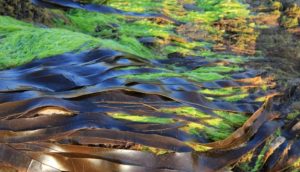 Kelp washed up on on shore.Photo by bluebudgie from Pixabay.

Since 2014, the Sonoma and Mendocino coast has lost more than 90% of its bull kelp forest due to warming waters caused by climate change, according to a 2019 study. These kelp forests shelter and feed a whole host of other marine life; losing them could mean an ecosystem cascade that would devastate many species and local economies.

One of the earliest causalities are abalone, whose primary diets are bull kelp. Until recently, scores of recreational abalone divers convened during the summer in Mendocino, until the catastrophic die-off of these large sea snails prompted Fish and Wildlife to cancel abalone harvesting until at least 2021.

More sinister is the rapid expansion of the purple sea urchin, which also feeds on bull kelp but can adapt to starvation conditions and has formed ravenous feeding fronts, or urchin barrens.

Laura Rogers-Bennett, a scientist with California Department of Fish and Wildlife (CDFW), is working on the issue. “The scale of these urchin barrens is staggering,” she said. “On the North Coast, we currently have 250km of sea urchins, who not only survive in starvation conditions but also reproduce.”

One solution to restoring the bull kelp forests is to eat the purple sea urchin. Groups of recreational and professions divers gather monthly, weather permitting, to harvest purple sea urchin in certain coves that still have kelp.

Bull kelp releases spores in late summer and autumn, then it’s ripped out by winter storms. The spores usually grow rapidly in the nutrient-rich cold waters along the Northern California coast, but now they are being eaten by purple sea urchin. If these spores don’t set three years in a row, it’s possible for the kelp to disappear entirely.

The creamy gold roe from sea urchin, uni, is highly prized in Japanese restaurants. Traditionally, red sea urchin, not purple, are harvested as they are larger, so there hasn’t been much demand for the smaller purple urchin in sushi restaurants, and virtually none in the US culinary mainstream.

To remedy this, environmental groups are reaching out to influential chefs to convince people to give it a try. (article continues at link below)

Featured photo of purple sea urchin by timvb1990 from Pixabay.