On April 9, 2021, it was announced that $800 million had been allocated to the long-awaited first phase of reconnecting and revitalizing Syracuse, New York another city by removing—and redeveloping the path of—a badly-planned urban highway that has long plagued the city: the I-81 viaduct. The project was originally reported here in REVITALIZATION on June 15, 2019. 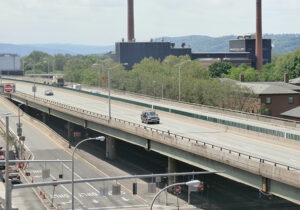 Assemblymember Al Stirpe said, “I am delighted that the long-discussed I-81 reconstruction project is on the verge of beginning, with one gigantic step being taken with the announcement of project funding in this year’s state budget. I have long been a proponent of and believer in the community grid, and I know this project will create many jobs in the short-term and truly help revitalize our city center and our entire region in the years ahead.”

The I-81 viaduct replacement replacement project will remove the existing elevated structure separating the city by constructing an integrated Community Grid that will disburse traffic along local north-south streets, create a new business loop and reconnect the neighborhoods severed by construction of the interstate.

State Department of Transportation Commissioner Marie Therese Dominguez said, “Governor Cuomo continues to deliver on his commitment to renew and modernize transportation infrastructure across New York and to ensure the global economic competitiveness of every region of the State. The Interstate 81 project provides a generational opportunity to incorporate equity as we rebuild our upstate economy. This is the single largest upstate transportation project in terms of level of investment, and as the project advances, the Department looks forward to sustained community engagement to maximize and realize its potential for Central New York.” 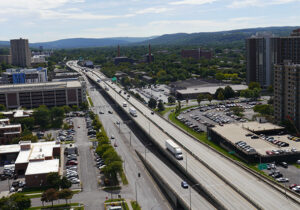 The project will also construct new shared-use paths for pedestrians and bicyclists and enhance access to public transportation services within the downtown core.

“For years we have been working on a solution to transform the obsolete and poorly designed I-81 viaduct in Syracuse into a modern transportation corridor, and this year’s budget is making it a reality,” Governor Andrew M. Cuomo said. “We’ve listened to the community, addressed concerns related to the project and put our best plan forward – now it is time for action. We look forward to that historic day when the first shovel breaks ground on this important project.”

The State Department of Transportation has been working with the U.S. Department of Transportation‘s Federal Highway Administration to finalize the draft Environmental Impact Statement for this transformative project and is on schedule to release the DEIS for public comment and to conduct a public hearing later this summer. After federal concurrence is achieved, the project will break ground in 2022.

Senator John W. Mannion said, “Replacing I-81 is a once in a generation opportunity to fundamentally improve the City of Syracuse through modernized transportation infrastructure that supports new economic activity, existing businesses, and our communities of color that have been negatively impacted by the viaduct for decades. I look forward to working closely with the Department of Transportation on moving this project forward in a timely manner. I am also committed to ensuring that local labor has a seat at the table and as many jobs as possible come from the Central New York workforce.” 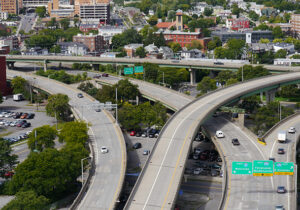 The project aims to reverse the classic 1950s planning blunder that separated the heart of the City by providing new opportunities for inclusion and equity afforded by the construction of the Community Grid, which the State Department of Transportation has determined will best meet the objectives of the project. The Community Grid will provide a boulevard-like setting that will support safe and ADA accessible pedestrian and bicycle amenities throughout the project.

Senator Rachel May said, “The I-81 project has been lingering over Central New York for well over a decade. I am thrilled the work is starting on the community grid, and believe this project will be a major part of Syracuse’s bright future. I will continue to advocate for urban design decisions and public investments that benefit all of Syracuse’s residents, taking into account both historical wrongs and the current long-term impact this project will have on many of our most vulnerable community members. I look forward to working with DOT and community stakeholders to continue these critical conversations as this project unfolds.”

This announcement builds upon strategic transportation investments to enhance the mobility and economic competitiveness of the Central New York Region, including construction of the region’s first Inland Port; the Syracuse Connective Corridor; the reimagining of the Syracuse-Hancock International Airport; and construction of a new ramp on Interstate 690 providing direct access to the Great New York State Fair.

Assemblymember Pam Hunter said, “Replacing the current viaduct with a Community Grid is a crucial investment into our city, county, and region. We welcome the State’s $800 million investment into our region to kick-start the first phase of this project. As we move forward, we need to ensure that every aspect of this project takes all the stakeholders into consideration.”

Pending federal concurrence, plans call for Phase 1 of the project to include work on the northern and southern sections of Business Loop 81, work on I-690 over Crouse and Irving Avenues, and the conversion of I-481 to I-81 including a number of road and bridge projects along the corridor.

Syracuse Mayor Ben Walsh said, “Funding in the State Budget for phase one of the I-81 Viaduct project brings this transformational opportunity one step closer to reality. The Community Grid is the right alternative to improve transportation for Syracuse and Central New York and to correct the decades long harmful impacts of the viaduct on people and our community. I thank Governor Cuomo and the Legislature for taking the steps to ensure this critically important project gets started as soon as possible.”

The $1.9 billion project will enhance vehicle access from the interstate to key destinations within the Community Grid, including the downtown business district, hospitals and Syracuse University. It will relieve existing traffic congestion issues on I-81, the Harrison Street/Adams Street interchange and Almond Street, by constructing a Business Loop 81 along Almond Street to improve connections to downtown and other business districts, effectively disbursing traffic at controlled intersections throughout the City.

All images courtesy of the City of Syracuse.