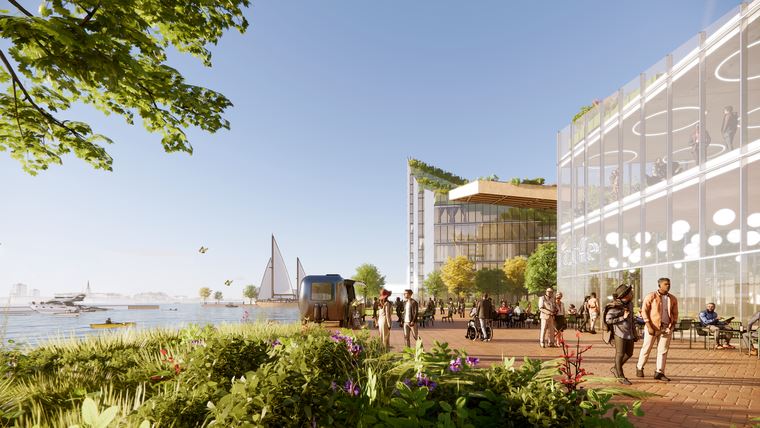 On September 9, 2020, the Delaware River Waterfront Corporation (DRWC) announced the selection of The Durst Organization as the lead developer for the massive Penn’s Landing riverfront redevelopment project.

The Board of Directors voted unanimously to select The Durst Organization at a public meeting, concluding a robust multiyear community engagement process. The proposed development will be located on available DRWC-controlled parcels at Penn’s Landing on Columbus Boulevard between Lombard and Market Streets. 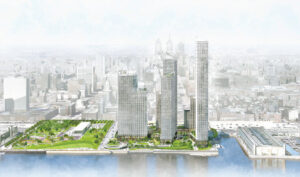 “We are thrilled to announce the selection of The Durst Organization as our next key development partner in DRWC’s effort to revitalize the waterfront,” said Alan Hoffmann, chairman, DRWC Board of Directors.

“After considering four strong proposals, we came to the conclusion that The Durst Organization offered the best plan to meet the goals and criteria identified through the public engagement process for the Master Plan for the Central Delaware,” he added.

The Durst Organization has proposed development that includes high quality design, the integration of parks and other public spaces, high standards of sustainability, mixed income housing, community engagement, and leveraging the project itself in a major way to expand economic opportunity for traditionally disadvantaged communities. 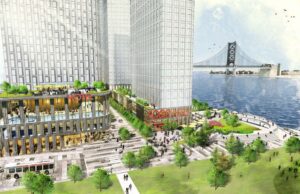 “This is a very large-scale project that will have a great impact on the waterfront for years to come. I look forward to the continued revitalization of Penn’s Landing. I am also grateful to the other respondents who offered creative ideas throughout this process. I want to thank them and encourage them to seek other opportunities to invest in our wonderful city,” he continued.

It was also the only proposal that required no subsidy from the taxpayers. In its proposal, The Durst Organization has pledged to invest over $2.2 billion into Philadelphia’s Delaware River Waterfront. 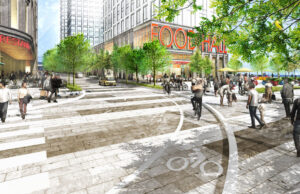 Once built and operating, the development will create and sustain 1,850 permanent onand off-site jobs, and will generate ongoing, annual tax revenues to the City of $35 million (including at least $9 million for the School District of Philadelphia) and to the Commonwealth of $21 million.

“We are honored DRWC has selected us for this transformative project that will provide Philadelphians’ extraordinary access to the waterfront,” said Jonathan (Jody) Durst, President of The Durst Organization.

“We look forward to working with community members, elected officials and stakeholders to finalize a design that fulfills the vision of the Master Plan for the Central Delaware, creates economic opportunity and jobs for all Philadelphians, particularly disadvantaged businesses and People of Color, and makes an inviting mixed-use development with retail and recreational amenities that activates the Delaware River Waterfront,” he added.

DRWC required every proposal to include a component to increase opportunity and wealth building in traditionally marginalized communities. The Durst Organization responded by committing to create a partnership with a minority-owned firm for up to 20 percent of the project. They’ve also pledged aggressive workforce diversity numbers, including making sure that a large percentage of professional services and construction contracts go to traditionally disadvantaged firms. 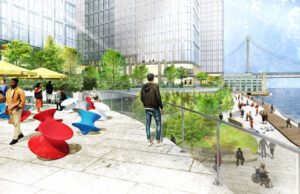 This development will leverage the $225 million investment that the public sector and philanthropic leaders have already dedicated to create a substantial and inclusive new public park at Penn’s Landing.

The new park is in final design and construction will break ground in 2021 and will also include a new multi-use trail along Columbus Boulevard and an extension of the South Street Bridge to bring pedestrians directly to the waterfront.

DRWC is a 501(c)(3) created in January 2009, exclusively for the benefit of the City of Philadelphia and its citizens. The fundamental purpose of DRWC is to design, develop, program and maintain public amenities such as permanent and seasonal parks, trails, and streetscape improvements to transform the waterfront into a vibrant destination for recreational, cultural, and commercial activities for the residents and visitors of Philadelphia as is consistent with the goals of the Master Plan for Central Delaware. Programming throughout the entire year is changing the way Philadelphians see and converse about the waterfront, and is helping to create spaces and communities that connect residents and visitors to the waterfront.

All images courtesy of The Durst Organization.