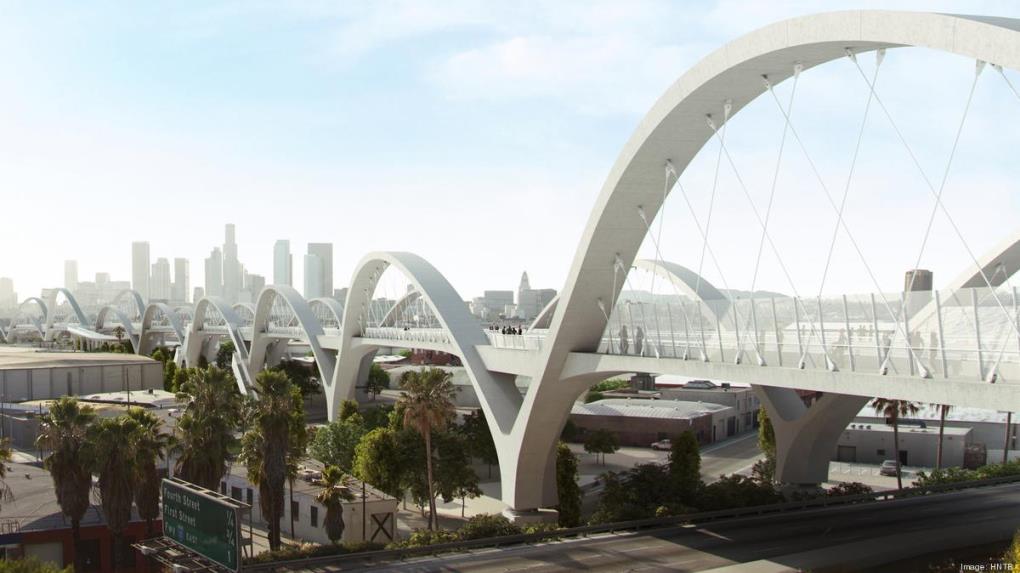 In Los Angeles, California, the new Sixth Street Viaduct, the largest bridge project in the history of the city has earned an Envision Platinum award for sustainability from the Institute for Sustainable Infrastructure.

The original viaduct—built in 1932—served as a vital connection between Los Angeles’ Arts District on the west side and the Boyle Heights neighborhood on the east side and was featured in many movies, music videos, and TV commercials.

The original bridge spanned 3,500 feet across the Los Angeles River, multiple train tracks, US Highway 101, and several local roads. It had a 46-foot wide, four-lane roadway with 11-foot inside traffic lanes and 12-foot outside lanes with no shoulders. It also featured sidewalks of varying widths on both sides.

Due to the large scale of the project, it was originally constructed using an onsite concrete mixing plant; however, the aggregate used in this plant caused a chemical reaction called Alkali-Silica Reaction (ASR) which unfortunately led to the deterioration of the bridge within 20 years of its construction.

Since then, the City tried many costly restoration methods to save the bridge to no avail. Meanwhile, seismic studies pointed to the bridge’s vulnerability in the event of a significant earthquake, and the bridge was found to have geometric design and safety deficiencies. The City ultimately determined that the bridge needed to be demolished and replaced with a new one. 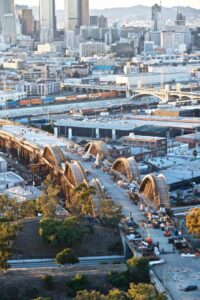 The $588-million project is funded by the Federal Highway Transportation Administration, the California Department of Transportation, and the City of Los Angeles.

“Wow — by earning the Envision Platinum Award, we’ve not only proven that the substantial sustainability goal was achievable, but also shown that the Project First Mindset worked, in that all participants delivered their part for the benefit of the environment,” said Jeff Smith, Project Manager, Skanska-Stacy and Witbeck JV.

The City’s Bureau of Engineering, under the leadership of City Engineer Gary Lee Moore and in partnership with the City’s Bureau of Contract Administration, led the development of the new Sixth Street Viaduct Replacement Project.

Gary Lee Moore, City Engineer, City of Los Angeles explained “The new viaduct looks to the future and will unite the community with a multi-model structure that will be a destination point for both residents and visitors. This project is an example of what future infrastructure projects should strive to achieve through collaboration with stakeholders and the delivery of a project that improves community mobility, quality of life, safety and resilience. The Sixth Street Viaduct has achieved these sustainable goals, as shown by the Platinum Envision award.”

The award was specifically for addressing community needs, adding significant public space and amenities, and improving community safety and resiliency.

Construction of the bridge was delivered through CMGC and led by a joint venture of contractors Skanska-Stacy and Witbeck (SSW).

“The Ribbon of Light,” as the viaduct has been dubbed, opened with a July 9 public celebration held on the viaduct followed by full opening to traffic on July 10, 2022.

Michael H. Jones, PE, SE, HNTB project manager, engineer of record and HNTB Fellow said “It was truly rewarding to see the completed structure exceed our expectation of delivering an extremely elegant, well-proportioned, and iconic viaduct that all Angelenos can be proud of as it connects our communities and improves mobility for everyone.”

The new viaduct includes many character-enhancing architectural features, improves community access and mobility, and provides a range of public amenities, including:

Now that the new bridge is complete, the Sixth Street PARC (Park, Arts, River, and Connectivity Improvements) Project will begin development. It will include 12 acres of open and recreational space under the viaduct, an arts plaza, public art, access to the Los Angeles River, and other community amenities.

The new bridge was designed by HNTB Corporation, with HNTB the Engineer and Architect of Record, in collaboration with and Los Angeles architect Michael Maltzan Associates and Danish architect Dissing+Weitling.