Once found throughout three provinces of Argentina, today there is little evidence of red-footed tortoises beyond a few isolated specimens. El Impenetrable National Park, a protected area where these threats are not present, is an optimal environment for their reintroduction.

So on May 23, 2022, following the country’s first large-scale importation of species for rewilding, 40 red-footed tortoises took a plodding and determined path from Paraguay to El Impenetrable National Park in the Chaco Province of Argentina.

Their new home needs their services. Dubbed “gardeners of the forest,” these tortoises consume vast quantities of native fruit, dispersing seeds that regenerate forests and diverse plant species, maintaining genetic diversity in a region among the hardest hit on the planet by deforestation. 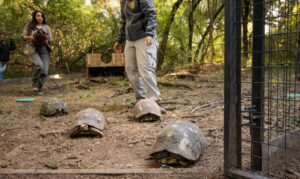 According to Sebastián Di Martino, Conservation Director of Rewilding Argentina, “The red-footed tortoise disappeared in Argentina for several reasons, including hunting and the illegal pet trade. But the widespread destruction of the Chaco forest, their habitat, is another cause of extinction. In fact, the last known population in Argentina lived in a forest razed to plant soybeans.”

Rescued from the illegal pet trade, the red-footed tortoises underwent a lengthy quarantine in Argentina before their transfer to El Impenetrable National Park.

After acclimatizing in a pre-release area for several weeks, the first ten specimens were released. The rest will be released successively in groups of ten with tracking devices attached to their shells to monitor their behavior for research.

Onsite scientist Gerardo Ceron shared the hopeful news that two female tortoises have already laid eggs in the soil of their new home.

If all goes well, they will hatch between September and November, coinciding with the first rains after the dry season.

“Heading into the UN Decade on Ecosystem Restoration, we need to act now to save species. Only their presence can restore complete ecosystems and ensure planetary health for all,” says Kristine Tompkins, president of Tompkins Conservation and UN Patron of Protected Areas.

With generous help from the Turtle Conservancy and DOB Ecology, the project is being carried out jointly by Rewilding Argentina, the National Parks Administration and the Province of Chaco, with the support of the Urutaú Wildlife Refuge in Filadelfia, Paraguay and the Ministry of the Environment and Sustainable Development of Paraguay.

Rewilding is a conservation strategy that seeks to recover healthy, complete, functional ecosystems by bringing back locally extinct species and supplementing threatened species.

Through the development of nature-based tourism, protected areas with complete and functional ecosystems foster the well-being and pride of neighboring communities.

Rewilding Argentina, the offspring of Tompkins Conservation, works within El Impenetrable National Park in collaboration with the National Parks Administration carrying out research, monitoring, and numerous tasks aimed at the expansion of the park, as well as developing an extensive inventory of biodiversity.

Rewilding Argentina receives support from DOB Ecology to restore the Gran Chaco, and from its strategic collaborator Tompkins Conservation, a leader in rewilding and park creation in the Southern Cone.