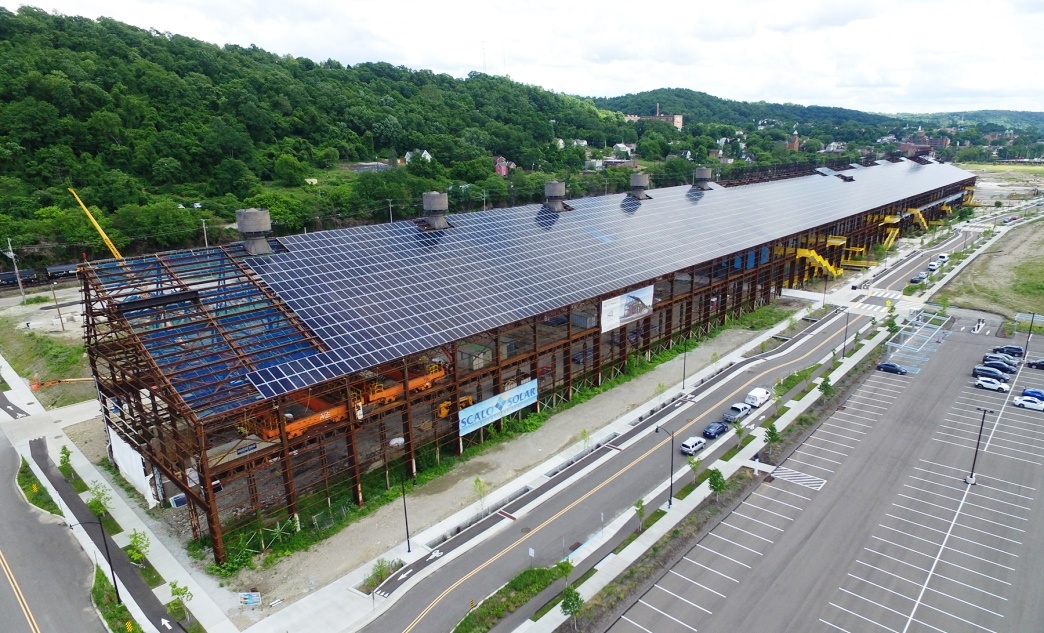 On August 12, 2020, it was announced that the last of 4784 silicon solar panels had been placed on Mill 19 at Pittsburgh’s visionary Hazelwood Green brownfield redevelopment site (which has been featured several times over the years here in REVITALIZATION).

This milestone marks the completion of the largest single sloped solar array in the United States. The $5 million project was completed by Scalo Solar Solutions. Its a massive scale covers 133,000 square feet across the frame of Mill 19, which it will power.

The quarter-mile+ long Mill 19 structure includes the steel skeleton of the original mill building, formerly built by the Jones & Laughlin Steel Company in 1943. 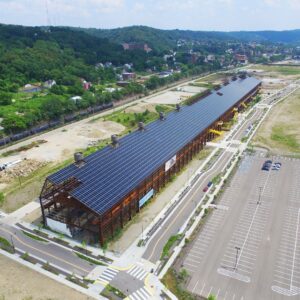 A formerly contaminated brownfield site, the Hazelwood Green remediation and redevelopment is envisioned as a model of sustainability, in true restoration economy style. Mill 19 has been designed with the goal of achieving LEED v4 Gold certification, with a high-performance envelope providing maximum thermal efficiency and up to 96% daylight autonomy.

100% of the complex’s total electricity usage will be offset by energy generated on site and storm water will be conveyed through a rainwater garden to centrally located infiltration basins. Captured rooftop rainwater will be reused in the cooling tower and for flushing in the restrooms.

The project was made possible by the Richard King Mellon Foundation and the other foundations that comprise Almono LP, the owners of the Hazelwood Green site.

The panels were installed using an innovative access platform netting material, aptly called the Spider WorkWeb, and attaching it to the Mill’s existing steel structure in a manner taut enough for the installers to walk on.

Each of these LG solar panels was pre-assembled and tested on the ground, then lifted and fitted into place. The slope of the roof is 20 degrees, a great angle to capture the majority of the sun’s rays. The array will generate over 2 megawatts of power, enough to power 264 homes annually.

The tenants of this revitalized site include Carnegie Mellon University’s Advanced Robotics for Manufacturing (ARM) and Manufacturing Futures Initiative, and Catalyst Connection in Building A.

Building B houses Aptiv, which recently entered into a joint venture with Hyundai to create autonomous (self-driving) vehicles.

All photos courtesy of the Regional Industrial Development Corp. (RIDC).