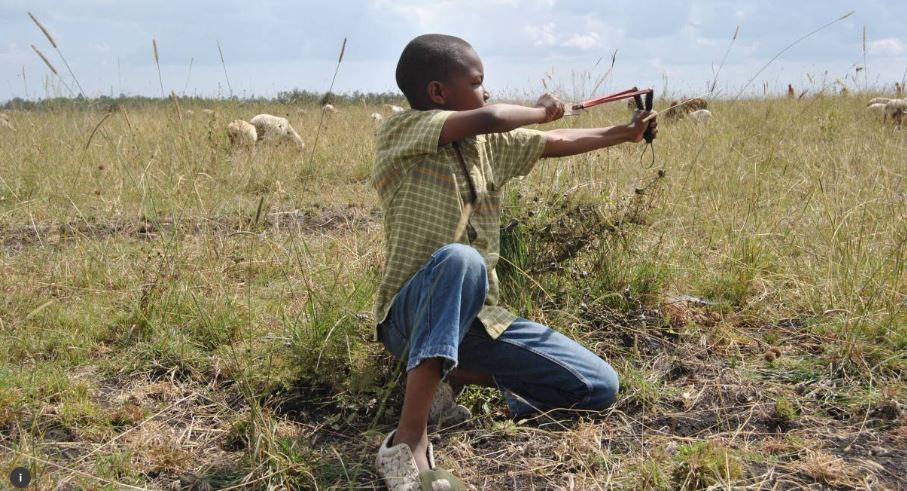 Early every morning on school holidays and weekends, Eric Ndung‘u heads off to herd his family’s goats in the plains of Kisaju, Kenya, south of Nairobi. While herding, Ndung’u hunts birds using a slingshot.

But he’s found a new use for his slingshot too: Planting trees.

Before he leaves with the goats, the 11-year-old runs to Nicholas Waweru‘s house to get a packet of seed balls, made of charcoal dust, cassava starch and tree seeds.

The balls work as ammunition to bring down birds – and, left behind on the ground, they gradually break down, releasing tree seeds to take root.

In an effort to combat deforestation and rebuild the nation’s depleted forests, Kenyans are trying some novel approaches, among them recruiting herder boys – as well as hot air balloonists and paragliders – to the cause.

Waweru works with Teddy Kinyanjui, a conservationist living in Nairobi’s Kabete estate, who makes the slingshots and seed balls.

Using seed provided by the Kenya Forest Research Institute, Kinyanjui researches what trees grow best in each area, then manufactures seed balls designed for that area.

The conservationist said he inherited his love of trees from his late father, Maxwell Kinyanjui, a professor at the University of Nairobi who was well known for his conservation efforts – including the invention of an environmentally friendly charcoal stove.

As part of reforestation efforts, he also planted a forest near Kisaji – one his son now takes care of.

The pair’s efforts are part of a broader push in Kenya to combat forest loss. The United Nations recommends that countries maintain at least 10 percent of their land in forest – but Kenya has only 7 percent forest.