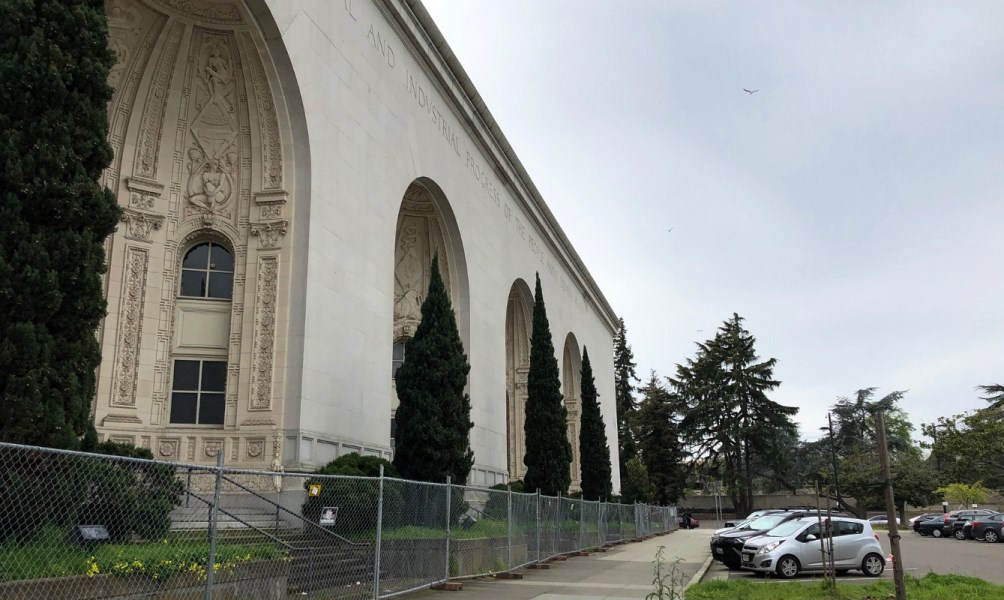 In Oakland, California, walking by the Henry J. Kaiser Convention Center and the Calvin Simmons Theatre—originally and commonly known as the Oakland Auditorium—on the south end of Lake Merritt is like walking by a frozen piece of history.

What looks like just another abandoned building from most sides tends to stop passersby in their tracks once they reach the grand front entrance. Rising above the chain-link fence wrapped in “No Trespassing” notices are seven grandiose, intricately carved archways, each unique and displaying mythical figures swirling through clouds and forests. 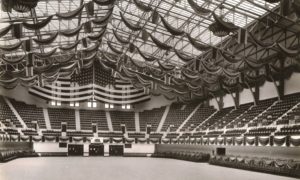 It’s a pretty dramatic sight to behold when you realize the space is, more or less, being used only as a parking lot.

After hosting rock concerts, educational lectures, graduations, sports games, a visit from Dr. Martin Luther King Jr. and a legendary Christmas pageant for nearly a century, the convention center officially closed in 2005 due to a financial deficit. Since then, it’s sat silent and vacant, waiting for an opportunity to be welcomed back to the community that loved it so dearly and used it so frequently.

Back in 2015, Orton Development Inc. was awarded the proposal from the city to renovate the space, and after a series of design and preservation meetings, plans appear to finally be moving forward. The group hopes to receive final approval for its proposal and break ground this summer. 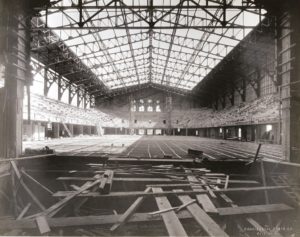 Framework for the seating and floor of the Oakland Municipal Auditorium Arena, circa 1913. Courtesy of the Oakland Public Library, Oakland History Room and Maps Division.

The development is simultaneously exciting and nerve-wracking for some longtime Oakland residents, as the reopened auditorium provides opportunities for community re-engagement at an end of the lake that’s been fairly quiet otherwise.

However, the proposed new plans have prompted a lot of side-eyeing at which community the new space will attract.

The anxiety around renovating any space in the Bay is palpable. Locals want to know the what, why and how of a change before it happens, in addition to understanding whether said changes will bring in members of a new tax bracket.

And with the Oakland Auditorium, there’s an added sense of loyalty and protectiveness about the communal fear.

Because historically, the Oakland Auditorium, as most still call it, has been a public space that was designed for public use — at least as far back as Oakland can remember. To lose that legacy to developer plans could spell heartbreak to a population invested in keeping the space community-centric.

See full article by Mel Burke in The Bold Italic.