“New York’s Local Waterfront Revitalization Program is made for projects like this, and we are honored to play a part in bringing the Skywalk to life,” said New York Secretary of State Rossana Rosado. “By supporting important infrastructure and development projects that literally bridge communities and attractions, we are making New York State more attractive than ever before.” 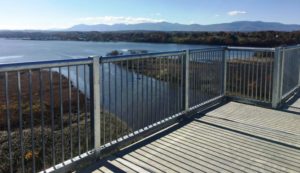 “The New York State Bridge Authority has worked hand-in-hand with all of the community partners to see this economic tourism project come to fruition,” said Richard A. Gerentine, Chairman of the Board of the New York State Bridge Authority. “The support from Governor Cuomo has been instrumental to seeing this project through, which the region will benefit from as a whole for future generations to enjoy.”

The Hudson River Skywalk will add $4.53 million annually and an estimated 66 jobs – for a total of $15.73 million annually and 330 jobs. It will also create a new economic engine built around the unique combination of pivotal history, stunning vistas, and a connecting walkway, all set within a region bustling with artistic energy and many other attractions.

The Skywalk includes new pedestrian viewing stations on the bridge that allow for stunning views of the Hudson River and the Catskill Mountains, as well as safe pedestrian access to the two historic sites and a new visitor parking area on the east side of the bridge.

“With today’s opening of the Hudson River Skywalk, New Yorkers and visitors alike can visit two historic sites with safety and ease,” New York Governor Andrew M. Cuomo said. “The Thomas Cole National Historic Site and Olana State Historic Site already act as economic engines for the region, and with the addition of this new project, the Skyway will serve as a regional attraction benefitting the Hudson Valley for generations to come.”

The Hudson River Skywalk is the centerpiece of the newly designated Hudson River Skywalk Region, which includes the Rip Van Winkle Bridge, the Thomas Cole National Historic Site and Olana State Historic Site, the City of Hudson, Town of Greenport and Town of Catskill. The Region was designated by Governor Cuomo in March 2018 to underscore the extraordinary tourism opportunities of the area.

To mark the opening, a ceremonial ribbon-cutting was held, with state and local dignitaries in attendance, along with members of the public.

New York State Department of Transportation Acting Commissioner Marie Therese Dominguez said, “This new transportation infrastructure does more than move people safely from one place to another; The Hudson River Skywalk connects two important cultural sites that will draw more visitors to visit the historic sites and the beauty of the Hudson River valley, with all it has to offer. Governor Cuomo’s leadership in using road and bridge improvements to stimulate local economies enhances safety and access while reviving upstate communities.”

The two historic sites provide ideal settings for exploring the transformative role that the Hudson River and the Catskill Mountains have played – and continue to play – in the history of American art. The Thomas Cole National Historic Site presents the home and studios of Thomas Cole (1801-1848), founder of America’s first major art movement, the Hudson River School of landscape painting.

Olana State Historic Site is the greatest masterpiece of Frederic Church (1826-1900), Cole’s legendary student and America’s first international art star. The City of Hudson and Town of Catskill are picturesque Hudson River waterfront communities with walkable downtowns and popular shops, restaurants, inns and arts venues. Easy access to both is provided by the Amtrak station in downtown Hudson, with Catskill less than 10 minutes away by taxi.

Those figures are in addition to the economic impact that the two historic sites already generate. Recent analyses by Business Opportunities Management Consulting in North Greenbush found that the annual economic impact of the Thomas Cole Site and Olana combined totals approximately $11.6 million and supports 274 jobs in the local economy.

To help market this regional tourist attraction, Governor Cuomo announced last year the creation of the Hudson River Skywalk Region. This was supported by a $225,000 Market New York grant awarded to the Thomas Cole National Historic Site in partnership with Olana through the Regional Economic Development Council initiative. This award helped to create the recently launched Hudson River Skywalk website that will invite visitors to the area.

Olana is the greatest masterpiece of Frederic Edwin Church (1826-1900), the preeminent American artist of the mid-19th Century. Church designed Olana as a holistic environment integrating his advanced ideas about art, architecture, landscape design, and environmental conservation. Olana’s 250-acre artist-designed landscape with a Persian-inspired house at its summit embraces unrivaled panoramic views of the Hudson Valley and Catskill Mountains and, today, welcomes more than 170,000 visitors annually.

Olana State Historic Site, a historic site administered by the New York State Office of Parks, Recreation and Historic Preservation, Taconic Region, is a designated National Historic Landmark and one of the most visited sites in the state. The Olana Partnership, a private not-for-profit education corporation, works cooperatively with New York State to support the restoration, conservation, and interpretation of Olana State Historic Site.

“The Hudson River Skywalk is the centerpiece of a major new tourism region linking not only Frederic Church’s Olana and the Thomas Cole Site but also the artistic energy of Hudson and Catskill,” said Sean Sawyer, the President of The Olana Partnership. “The Hudson River Skywalk Region will be a key economic engine for the two counties and the entire Hudson Valley.”

Thomas Cole National Historic Site is the birthplace of American art, presenting the original home and studios of Thomas Cole, the founder of the Hudson River School of painting, the nation’s first major art movement. Located on six acres in the Hudson Valley, the site includes the 1815 Main House, Cole’s 1839 Old Studio, the recently reconstructed New Studio building, and panoramic views of the Catskill Mountains.

It is a National Historic Landmark and an affiliated area of the National Park System. The Thomas Cole Site offers guided and self-guided tours, special exhibitions of both 19th-century and contemporary art, printed publications, lectures, extensive online programs, activities for school groups, the Cole Fellowship program, free community events, and innovative public programs such as the Hudson River School Art Trail—a map and website that enables visitors to visit the places in nature that Cole painted.

The goal of all programs at the Thomas Cole Site is to enable visitors to find meaning and inspiration in Thomas Cole’s life and work. The themes that Cole explored in his art and writings—such as landscape preservation and our conception of nature as a restorative power—are both historic and timely, providing the opportunity to connect to audiences with insights that are highly relevant to their own lives.