On August 27, 2019, the National Park Service (NPS) announced $5 million in Historic Revitalization Subgrant Program (HRSP) grants to nine projects to support the restoration and preservation of historic buildings in rural communities across the country.

These grants mark the first year of funding for the HRSP. State and Tribal Historic Preservation Offices, Certified Local Governments, and non-profits were eligible to apply for funding to support a subgrant program to fund multiple preservation projects in their rural jurisdictions.

Three examples of projects receiving grants through this first year of funding include: 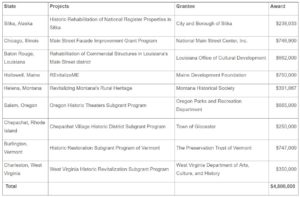 Funding for this competitive program is provided by the 2018 Historic Preservation Fund (HPF) which comes from revenue from Federal oil leases on the Outer Continental Shelf, providing assistance for a broad range of preservation projects without expending tax dollars.

In Vermont, Senator Patrick Leahy (D-Vermont) announced that the Preservation Trust of Vermont had been awarded a $747,000 Historic Revitalization Subgrant Program grant.

The grant was among the largest nationwide of nine released from the new, Leahy-created program to invest in historic preservation to help revitalize rural communities around the country.

Leahy said, “Vermont’s successes again have offered a model for an important federal program to help boost economic development in rural areas across the country. I was proud to work with the Preservation Trust of Vermont to take the vision for this program and make it a reality at the national level. I know the Trust will help communities use these dollars to make a lasting impacts in communities across Vermont.” 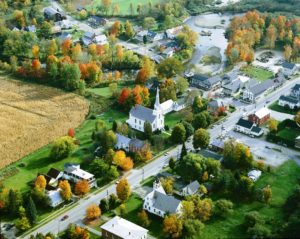 Waitsfield Village, VT, is one of the three communities that make up the Mad River Valley Planning District, which as been a partner with the NPS in the Certified Local Government program since 1988. Image: State of Vermont

As Vice Chairman of the Senate Appropriations Committee, Leahy created the $5 million annual program to support rural communities working to revitalize historic properties in their communities of national, state and local significance in order to restore, protect and foster economic development in rural villages and downtown areas.

Paul Bruhn of the Preservation Trust of Vermont added, “We are thrilled to have received this grant from the Park Service. It’s going to help us support really critical community preservation projects throughout the state of Vermont, and this program will be a boost for several communities throughout the state. We know that, like so many other programs, it took Senator Leahy’s leadership to make it happen and we are most appreciative.”

This program funds physical preservation projects for historic sites, including architectural and engineering services through subgrants to communities determined rural by the US Bureau of the Census.

Eligible properties must be listed in the National Register of Historic Places or determined eligible for listing at the National, State, or local level of significance and located within rural (non-urban) communities with populations less than 50,000. States, Tribes, Certified Local Governments, and non-profits will apply for funding that will in turn be subgranted to rural communities in their jurisdictions.

In Lousiana, U.S. Senator Bill Cassidy, M.D., (R-LA) announced that $662,000 had been awarded to the Louisiana Main Street Program, which is part of a national initiative to revitalize small-city downtowns and urban neighborhoods so as to foster economic growth.

“This money will generate economic activity and bring jobs. This is a very competitive grant, and Louisiana won. This is good,” said. Dr. Cassidy.

An additional $5 million will be available in FY2019 funding in the winter of 2020. If your community is interested in competing in the next round, check this site to confirm rural eligibility: https://www.census.gov/quickfacts.

Photo of churches and historic buildings in Montpelier, Vermont via Adobe Stock.