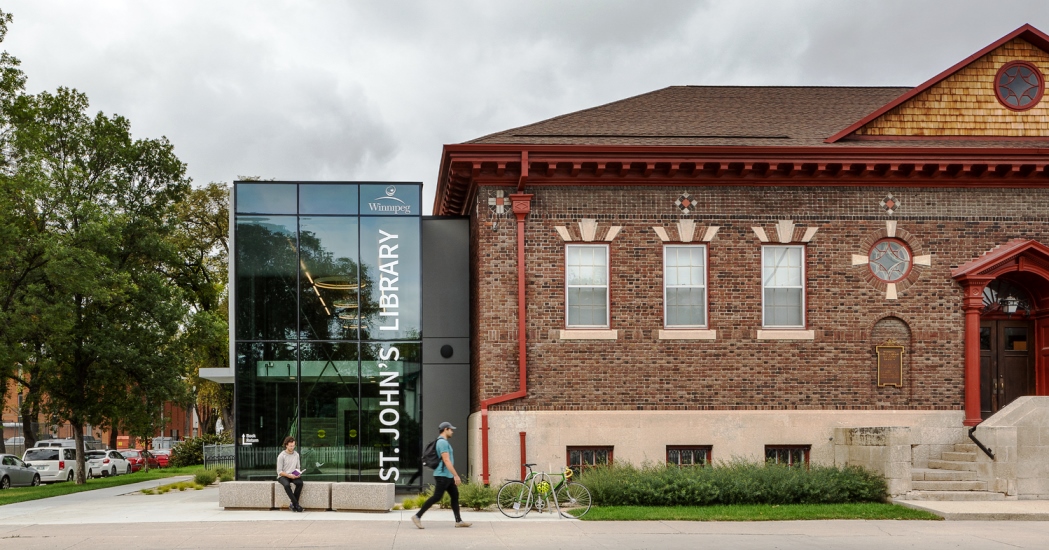 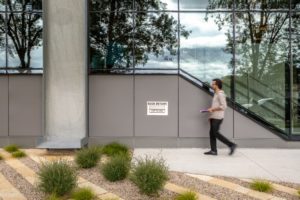 Designed by the architects at Public City Architecture, it includes the addition of a modest new entry hall, which doubles as a reading room.

Along with upgrades to building systems to meet new energy and accessibility codes, the scope of work includes the addition of a community plaza and stormwater retention garden in Winnipeg’s North End, to help restore the urban watershed.

The program of requirements included both heritage restoration and exterior/interior accessibility upgrades, but site remediation and building code upgrades were equal requirements. 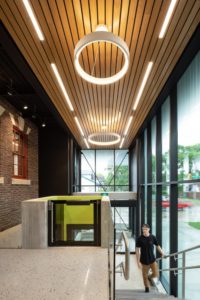 Instead of adding an exterior ramp and elevator shaft to the building (a solution expressed in the program brief) a single glass addition was designed to combine the demands of accessibility and the desire for an open community reading room.

Inspired by a vitrine, the glass box showcases the heritage façade. At the interior, the façade is left in its native state, modified only by the removal of one window.

The addition includes a lift, main stairs, a seating area, magazine racks, and a standing work table. A universal washroom is tucked behind the west corner of the heritage facade.

Above the entry vestibule, a reclaimed oak floor is a stage for commissioned public art. 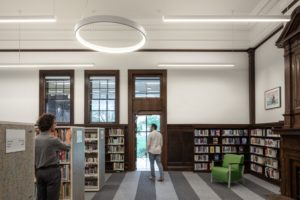 Opposite, a black background amplifies the heritage features of the Carnegie Library, and will host community quilts, sculptures, and works fabricated in the Library’s in-house community outreach program.

Column bases are designed to reflect the original masonry ornamentation below the façade’s frieze and a predominant use of black is intended for the addition to recede like a good frame might around a canvas of art.

Outside, an expressive galvanized rain gutter waterfalls over the glass façade, a detail that seeks to draw attention to the integration of building and site in a city that has yet to embrace site-stormwater management. 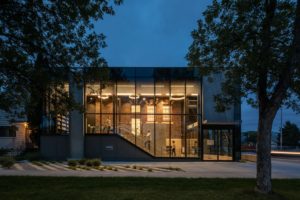 In the Carnegie Reading Room, stacks remain in their original locations and the furniture has been restored.

A circulation desk in clear view is designed to be accessible to all visitors. A library manager’s office and a bank of public use computers were added to the Hall.

Downstairs, tutorial and community meeting rooms are provided with state of the art audiovisual and improved safety. A safe discovered in construction has become a display for Carnegie-era artifacts.

All photos courtesy of Stationpoint Photographic.