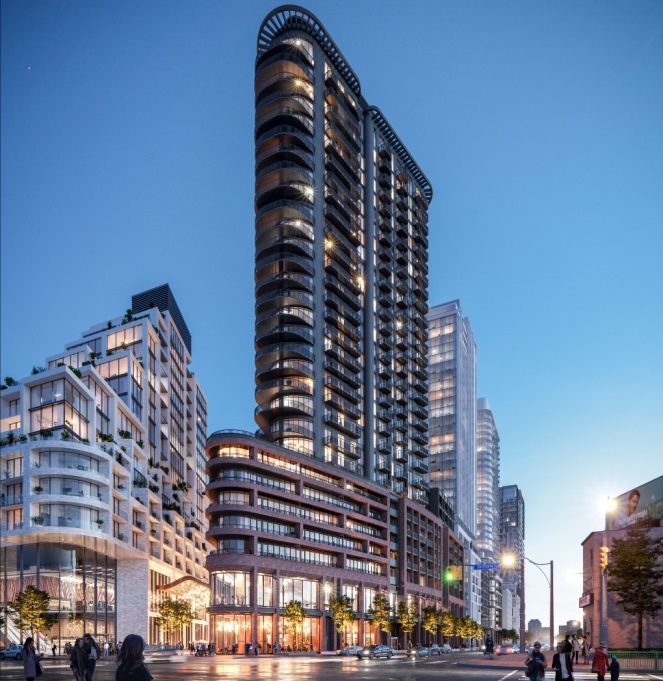 On September 21, 2020, the revitalization of the West End of Toronto, Ontario, Canada took another major step forward. That’s when it was announced that a new mixed-use building will provide a dramatic entrance to the redeveloping 20-acre area, with a flatiron design that celebrates and pays homage to the area’s unique industrial heritage.

The Galleria III building is the next phase in ELAD Canada’s Galleria on the Park master-planned community. A series of inviting public realm spaces—including a brand-new 8-acre city park, a 95,000 sq. ft. community centre, pedestrian mews and retail spaces—are also on the way to revitalize and reanimate this part of the city.

“Rising at the entrance of Galleria on the Park, Galleria III will become the new landmark building for not only our community but for the West End,” says Rafael Lazer, CEO of ELAD Canada. “This marks an exciting new chapter for Toronto’s cityscape. We have always believed in this special neighbourhood, already a source for so much ingenuity and entrepreneurship and we are proud to deliver better community amenities, green spaces and beautiful architecture to the area.” 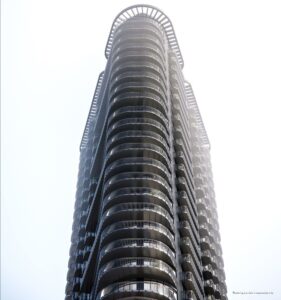 Galleria III was designed by Hariri Pontarini Architects (HPA), who specifically selected this block as their defining architectural contribution because of its unique shape. HPA – also behind the visionary design of the overall Galleria on the Park masterplan – has pushed the envelope, creating an elevated flatiron building they hope will be a bold beacon to the rejuvenated area.

Standing at 31 stories, Galleria III features a deep red brick exterior at the podium, honoring both the industrial heritage of the site as well as the neighboring homes. Industrial themes create continuity throughout the design with metal panels inspired by intricate patterns of steel radiators featured on the tower’s exterior and vertical metal guardrails on balconies.

Signature curves created by the building shape are carried throughout the interior units and balconies, resulting in a soft fluidity. Two stories of retail at grade will offer food, beverage, and personal services, redefining community lifestyle in this emerging neighborhood.

“We wanted to work on this influential tower so we could both build on the existing character of the neighbourhood and look to the future, setting the tone for the continued evolution of the West End,” says David Pontarini, Founding Partner at HPA. “The result is a sophisticated design, unlike anywhere in the city, which emphasizes the pedestrian experience to define a new chapter for Dupont St.”

“The façade and feeling at the corner of Dupont and Dufferin Streets is going to be completely re-imagined with the announcement of Galleria III,” said Dror Duchovny, Vice President Marketing & Asset Management at ELAD Canada. “We always plan with the community in mind and Galleria III is no exception. Channeling the exciting energy in this neighbourhood-on-the-rise, we’re proud to unveil Galleria III’s unique and sophisticated design and improved public spaces to match the vibrancy of Toronto’s West End.”

Interiors and amenities by award-winning studio DesignAgency bring their international experience in hospitality, including The Broadview Hotel, The Ritz-Carlton, and Momofuku, to suites at Galleria III. Contemporary furnishings and time-honored finishes like leather and wood usher in a boutique, elevated experience. The double-height lobby features cozy seating, custom artwork, and recharge stations, while the curved walls and arches echo the sinuous lines of the exterior.

Inside the suites, residents will be given the option to choose between three bespoke palettes: light and bright, high contrast, or tone on tone. The clean and contemporary design of the kitchens feature flat panel cabinets while the bathrooms are outfitted with upscale features such as custom wood veneer vanities and mirrors emulating the contours of the building.

“Walking into this project, we were really inspired by the strength, connectivity, and creativity already found in Toronto’s West End community,” says Matt Davis, Founder, DesignAgency. “These incredible qualities combined with the history of the neighbourhood informed our approach, and how the residents of Galleria III would live, work, play, and gather in their new homes.”

The impressive amenity program takes into account the changing ways we live and work today. The third floor is a mecca for modern wellness, offering residents ample space to relax, decompress, and reconnect with themselves mindfully. The wellness amenities are welcoming and inclusive, with a fully equipped fitness centre with a yoga room, spin studio, and meditation room, as well as an exterior dog run and pet wash, outdoor yoga spaces, and private pods surrounded by lush trees. Wood ceilings and neutral materials impart a natural, calming, and zen-like atmosphere.

The tranquil experience extends to a co-working space where residents will take advantage of their increased clarity and focus at the semi-private desks, meeting rooms, and a multipurpose studio room which offers tool-sharing to accommodate the many artists and creatives in the neighbourhood.

The 11th floor is a dedicated social space, complete with a social lounge with hanging orb fireplace, billiards and a private dining room with chef’s kitchen and wine cellars, and a youth hub for all ages, expanding upon the typical offerings geared to children or toddlers. Outdoors, a barbecue area, games space, and an elevated pool with cabanas overlooks the tree canopy north of Dupont.

Construction for the first phase of the eight-building Galleria on the Park development began in August 2020. Rising to heights of 29 and 24 stories, Galleria 01 and 02, designed by Core Architects, sets the tone for a new urban community meticulously master-planned by HPA and Urban Strategies. The first phase also includes retail space, a new 95,000-square-foot Wallace Emerson Community Centre, and the expanded eight-acre city park. Upon full buildout, Galleria on the Park will introduce nearly 2,900 condominium residences and 300,000 square feet of retail space to the West End neighborhood.