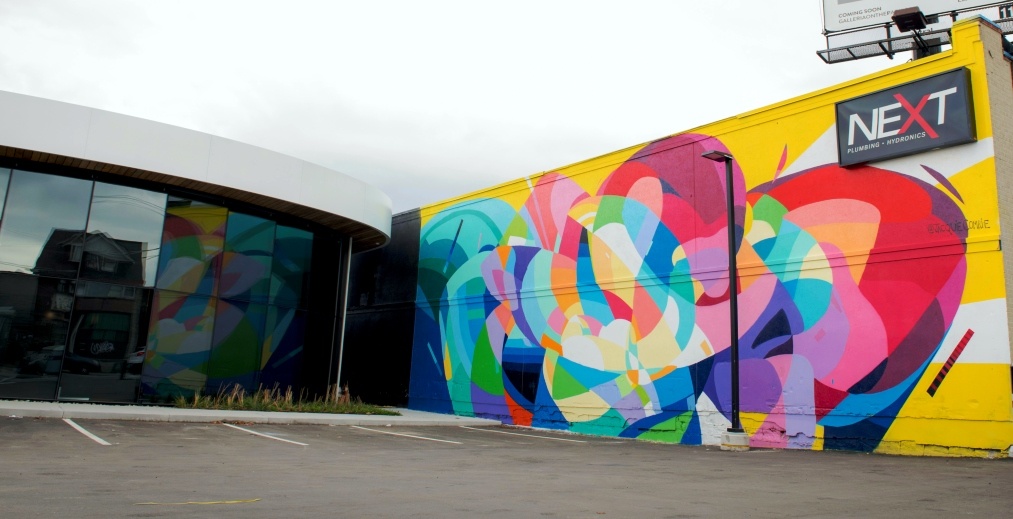 Located at the northeast corner of Dupont and Dufferin Streets, across from Galleria on the Park’s master-planned community site, Comrie’s mural re-imagines an exterior wall into a kaleidoscope of color, reflecting the ongoing transformation of the New Dupont into a revitalized community hub.

86 feet wide and 22 feet tall, Comrie’s abstract mural, named The Renaissance of Mother Gaia draws from the world of color psychology, with a palette selected to bring hope, happiness, and healing to the West End during a tumultuous year. 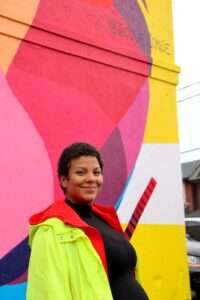 “My work has always been inspired by colour and the incredible impact it has on our wellness and mental health,” says Comrie.

“It’s been a difficult year across the world and now more than ever, I wanted to create a space for people to take a break, nurture themselves and experience the healing power of colour. I’m so excited to bring this experience to the New Dupont community,” she continued.

Spearheaded by ELAD Canada, the journey to Comrie’s mural began when they approached STEPS Initiative with the goal of supporting a local public art organization with strong ties to Toronto’s cultural community.

Already aware of—and in admiration of—Comrie’s work, ELAD Canada worked with STEPS Initiative to commission Comrie to create a mural that would further animate this up-and-coming pocket of Toronto.

To bring this vision to life, the team also collaborated with NEXT Plumbing Hydronics Supply to host the mural on their west exterior wall. The leading Toronto wholesaler was enthusiastic about the opportunity to work together on this initiative. 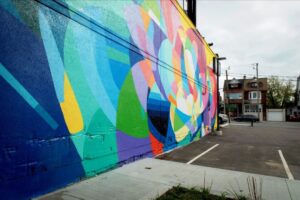 An artist-on-the-rise, Comrie has become renowned across the city for her public art projects that animate the everyday, like the TTC streetcar transformations using eclectic color palettes and geometric shapes.

Her trademark use of bright colors have transcended beyond Toronto, with featured work in cities across the world including Miami, Madrid and Panama City. Hailing from Panama, Comrie’s work is also inspired by the vibrant energy and expression of her home.

The reveal of Comrie’s mural reflects the third public art installation commissioned by ELAD Canada at the Galleria on the Park master-planned community site. Existing installations, both by local artist Thrush Holmes, include the iconic 60-ft-tall mall pylon which has been transformed into a neon landmark beacon, and his series of six rainbow murals located along the bays of Galleria Mall’s north side. 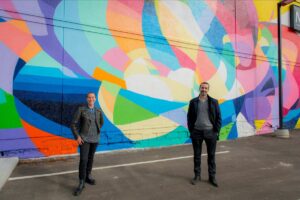 “At ELAD Canada, we’re strong believers in the limitless potential of the arts to animate and enhance our communities,” says Dror Duchovny, VP Asset Management and Marketing at ELAD Canada.

“Galleria on the Park will be a vibrant and inclusive place to live with incredible amenities for everyone, and we recognize that public art installations are a vital part of this experience. We’re proud to engage with local artists like Jacquie Comrie, and to unveil her stunning mural during this challenging time when we could all benefit from a little colour and positive energy,” he added.

ELAD Canada will continue to work with STEPS Initiative on public art as construction on Galleria on the Park progresses. Their next project will be transforming the hoarding which wraps around the site.

The unveiling of the new mural is set alongside the highly anticipated launch of Galleria III, the second phase of the Galleria on the Park master-planned community. Designed by Hariri Pontarini Architects, with interiors by DesignAgency, Galleria III sets a new design standard in Toronto with its flat-iron form and comprehensive wellness amenity program.

All photos are by Sharon Mendonca.