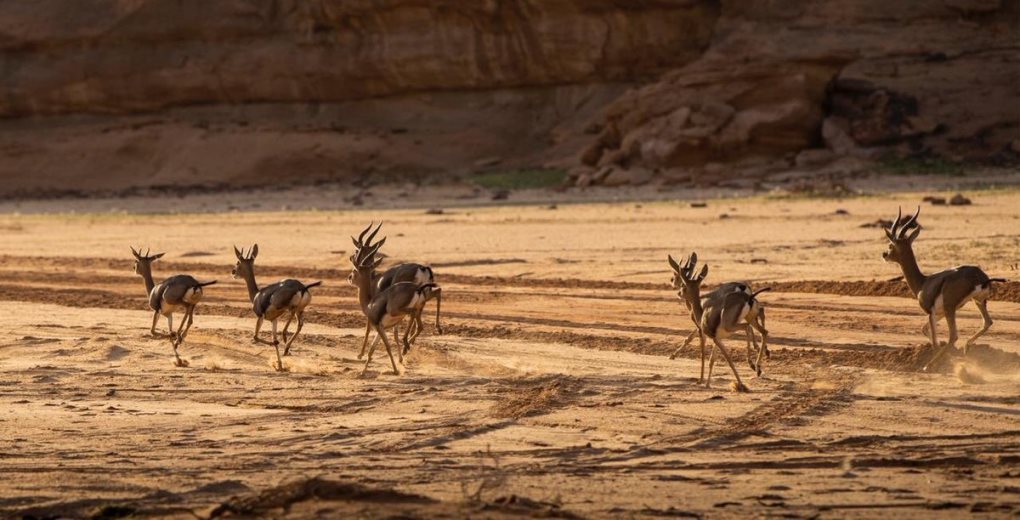 The gazelle fawn took its first wobbly steps within the breathtaking Hejaz mountains of Saudi Arabia’s AlUla region. The fawn was watched by its mother and, unbeknownst to the pair, by rangers from AlUla’s Sharaan Nature Reserve.

For Frank Rietkerk, Captive Breeding Manager at the Royal Commission for AlUla, these weren’t just the first steps of the newborn gazelles, they were the first successful steps of the re-wilding of the AlUla region after decades of over-grazing and other human activity that had destabilized the fragile environment.

“We’re delighted with this first generation of native-born gazelles here,” Frank explained, “signifying very early steps towards the potential re-birth of Sharaan as a complete, fully-functioning eco-system as it once was hundreds of years ago. We’re still in the first stages, but we’ve had some crucial early successes, this new generation of gazelles, of course, but also re-establishing the vegetation they need to survive.”

The Sharaan area, home to this new generation of gazelles, has been designated by RCU as a nature reserve due to its extensive geological, topographical and environmental features. Its landscape is raw and untouched, with spectacular rock formations towering over flora, fauna, and visitors alike. 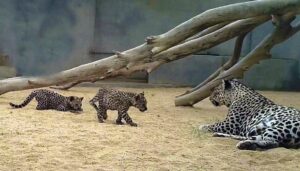 But the development of Sharaan as a nature reserve is about more than supporting the gazelles, it also means restoring the complete ecosystem with a view to eventually reintroducing the elusive and critically endangered Arabian leopard.

“We believe that the Arabian leopard was once well-established here as one of AlUla’s native species and its presence looms large in the area’s ancient history and even persists now in the popular imagination,” Rietkerk explains. “Sadly, both hunting and the damage to the wider environment have caused their numbers to fall precipitously. We are now working to a five to 10 year timescale to reintroduce these majestic big cats.”

As part of the wider conservation plan, RCU signed an agreement in June 2019 with Panthera, the world leader in wild cat conservation with initiatives in 39 countries. RCU will draw on Panthera’s expertise, cutting edge technology and team of leading biologists, law enforcement experts and wild cat advocates to promote conservation of the Arabian leopard.

“With this new partnership we’re excited to work with RCU in addressing the reason behind that. Based on our work in support of other big-cat populations around the world, we’ve designed a monitoring framework combining intensive techniques to assess the status of Arabian leopards, their competitors and prey in Saudi Arabia where we believe them to still be extant. We’re also going to be working with RCU and the Saudi Wildlife Authority to train biologists, fieldworkers and other experts with a view to ultimately revising Saudi Arabia’s National Strategy and Action Plan for the Conservation of Arabian Leopards,” he explained.

Key to this monitoring framework is a network of wildlife detection cameras that will be vital to establishing just how many leopards remain in the wild.

But no matter how hi-tech the cameras, placing them in the wild required low-tech human adventure. “Panthera identified 10 core sites across Saudi Arabia with the most promising chance of hiding the last remaining leopards. Of course, we then had to hike out to those sites with the cameras,” relates Abdulaziz Alenzy of the RCU’s nature team. “We were out there for four days and, along with our colleagues from Panthera and the Saudi Wildlife Authority, hiked to remote locations and scoped out the best spots to set up our wildlife detection cameras with the greatest chance of capturing Arabian leopards on film. Finding footprints and scat for Arabian wolves, Striped Hyenas, Rock hyrax, and fox species, was a reminder that Saudi Arabia remains home to truly vibrant ecosystems. And the AlUla ecosystem is ready to spring back with a little helping hand from us.”

Over the next two years, the RCU, Panthera, and Saudi Wildlife Authority (SWA) teams will place up to 80 cameras in each of the 10 core sites. Each camera station is capable of storing approximately 6000 images. Despite natural tensions between leopards and humans in this region (and around the world), the combined teams’ approach also embraces local knowledge. The trail camera monitoring network is supplemented by structured questionnaire surveys answered by 2000-4000 locals familiar with the area to examine species occurrence, gauge attitudes towards wildlife, and assess animal connectivity across the mountains. A baseline of wild Arabian leopard populations across Saudi Arabia will provide information needed to fine-tune the vision for a reintroduction of Arabian Leopards in AlUla.

Frank Rietkerk is quick to emphasize that this process is being undertaken with a view to long-term sustainability, which brings us back to the gazelles. “Once the initial reintroduction is done, we’re not looking to have a hands-on approach to supporting the leopards. We want to see this ecosystem function as it did before we humans disrupted it. That’s why it’s so important to get the whole food-chain rebalanced; from the plant life, through the herbivores, and up to the leopards and other apex predators. Ultimately, if we can’t make this habitat work for the gazelles, then it won’t work for the leopards,” he said.

Indeed, this long-term, sustainable approach can be seen across the RCU’s entire strategy for AlUla, which will see the region developed as a global destination for culture, natural heritage and eco-tourism. Visitors will be able to immerse themselves in a unique, experiential and authentic Arabian landscape where ancient human history and charismatic wildlife live in harmony once again with the human communities and visitors.

The creation of the Sharaan Nature Reserve is just one of the development programs to realize this vision, which will also directly benefit the communities of AlUla through job creation, new economic and training opportunities, and sensitive urban regeneration.

“You only need to look at the myriad petroglyphs in this area to see that there’s a long-history of humans, leopards, and other wild animals co-habiting in this area,” says Ahmed AlMalki, Nature Reserves Director.

“In the past, this relationship hasn’t thrived. But we’re confident that we can have nature and humanity benefitting each other. We’re re-establishing a pristine area as it once was as part of the “Living Museum” we’re building here in AlUla. This will in-turn attract visitors from around the world, bringing with them economic and social development. We’ll be training our local community as rangers, guides, educators and more, ensuring that our nature reserve is sustainable for generations to come,” he concluded.

It’s an ambitious vision for AlUla, one that is in keeping with Saudi Arabia’s ambitious Vision 2030 program, but, just like the newborn gazelles taking their first steps, one that has legs.