The term “rewilding” was invented by famed (and recently deceased) environmentalist David Brower, an American.

I (Storm Cunningham), also an American, promoted the concept very early on in my first book, The Restoration Economy, which was published back in 2002, and which I started writing in 1996. 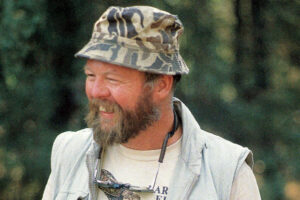 The United States does have Dave’s The Rewilding Institute in Albuquerque, New Mexico, and my RECONOMICS Institute in Washington, DC.

We also have the Wildlands Network, based in Salt Lakes City, Utah. They focus on an absolutely essential aspect of rewilding: reconnecting existing protected habitats to create viable wildlife corridors.

As documented in my 2020 book, RECONOMICS: The Path To Resilient Prosperity, we can often restore or revitalize two places (ecosystems, cities, etc.) without changing them: simply by reconnecting them.

Despite the excellent work of both organizations, the fact remains that rewilding seems to have far more momentum and public support on the other side of the pond.

This might be largely due to the national (Rewilding Britain) and continental (Rewilding Europe) organizations that are dedicated to the subject.

We’ll focus here on the latest activities of Rewilding Britain as an example.

On December 2, 2022, a restorative new annual fund to tackle the nature and climate crises is being launched by charity Rewilding Britain, with £100,000 to be awarded to one large-scale rewilding project every year.

The Rewilding Challenge Fund encourages applicants across Britain to “Think Big, Act Wild“, and has been set up to nurture innovative and pioneering initiatives which show maximum potential for upscaling rewilding on land and at sea.

The significant new award is being made available because of increasing demand for large-scale rewilding projects.

There is growing recognition that rewilding is a key solution for tackling the nature and climate emergencies, with extensive benefits for people including nature-based economic opportunities. 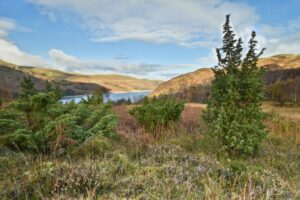 Sara King, Rewilding Manager at Rewilding Britain, said “We are absolutely delighted to launch the Rewilding Challenge Fund under the heading ‘Think Big, Act Wild’. We’re looking to scale-up rewilding – a vital step if Britain is to achieve the goal of major nature restoration across 30% of the country’s land and seas by 2030.”

“We’re really keen to hear from community groups who can join together to bid for ambitious, large-scale rewilding projects, as well as from the managers and users of large areas of land and sea,” she added.

Rewilding is the large-scale restoration of nature to the point where it can take care of itself again. It involves reinstating natural processes and, where appropriate, native missing species.

Rewilding Britain is calling for major nature recovery across 30% of Britain’s land and seas by 2030 – including core rewilding areas of native forest, peatland, grasslands, wetlands, rivers and coastal areas across 5% of the country, with no loss of productive farmland.

The charity launched its Rewilding Challenge Fund just ahead of the crucial UN biodiversity summit COP15 in December of 2022, in order to demonstrate rewilding’s growing support and its huge potential for helping Britain reverse nature loss and meet its climate targets.

The increasing popularity of rewilding has been highlighted by the success of Rewilding Britain’s growing Rewilding Network, which brings together a wide range of community groups, farmers, landowners, land managers and local groups across Britain to share ideas, experiences and expertise. 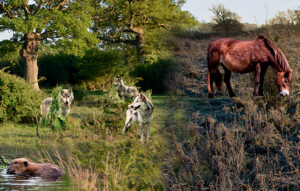 The Rewilding Network now includes almost 900 members, covering more than 113,000 hectares of land and more than 300 square kilometres of seas. These projects are demonstrating the extensive economic and social benefits of rewilding to local communities, as well as to biodiversity.

Over a million acres of new tree cover could be created in England simply by letting existing woodland regenerate and spread, Rewilding Britain’s recent research shows.

The findings, commissioned by Friends of the Earth in partnership with Rewilding Britain, bolster calls that the UK government should pay greater attention to natural regeneration as a way to confront nature and climate emergencies by increasing the country’s tree cover, alongside planting more trees.

Natural regeneration is the process by which trees self-seed through wind-blown seed dispersal or where animals like jays and squirrels bury nuts which then germinate. The benefit is that it naturally occurs, but is often disrupted by grazing livestock and deer eating the saplings.

New mapping, carried out by Tim Richards from TerraSullis on behalf of the two organizations, shows that allowing existing broadleaved woodlands in England to self-seed by 150 meters on all sides – excluding nature reserves, priority habitats, and productive farmland – would produce a million acres of new woodland. The analysis also identified the local authority areas with the greatest potential for natural woodland regeneration, which includes Cornwall, Harrogate and Northumberland.

England is one of Europe’s least wooded countries. Evidence from Friends of the Earth shows there is more than enough suitable land to double England’s tree cover, without affecting precious habitats such as peatlands or valuable farmland. Current rates of woodland creation in England remain at historically low levels, with just over 5,000 acres (2,000 hectares) established this past year, mostly through planting.

Mike Childs, head of research at Friends of the Earth, said “Doubling the UK’s tree cover should be a government priority, this is because the benefits are clear to see. It will help to restore nature and absorb climate-wrecking carbon emissions. By enabling woodlands to flourish, we can also reduce the UK’s dependence on timber imports in a further win for the planet.”

“Natural regeneration puts us well on the way to that goal in England. By substantially increasing funding for farmers and other landowners so they can set aside suitable land for natural woodland regeneration, we can let nature work its magic,” he continued.

“Allowing trees to self-seed leads to more biodiverse woodland and scrub habitat than if they are simply planted, and supports many threatened species of plants, birds and mammals. By working with nature, it helps resolve the problem of growing the ​‘right tree in the right place’ – and does so at lower overall cost, because you don’t have to pay for saplings or the costs of planting them,” he added.

An analysis of over 20 sites across England covering over 75,000 rewilding acres between them has revealed a 47% increase in full-time equivalent jobs and a nine-fold increase in volunteering opportunities.

The data also shows that food production can continue on marginal land that is rewilding, with all of the sites continuing to generate income from food production, livestock and other enterprises – puncturing myths by demonstrating that rewilding in Britain is not about land abandonment or ceasing food production.

Rewilding Britain has analysed data from the 23 sites as part of its role catalysing practical rewilding through support to landowners. Many are part of the charity’s new Rewilding Network, which is bringing together landowners, farmers, land managers, community groups and local authorities from across Britain.

“Our findings on green jobs should be music to the Government’s ears. They spotlight rewilding’s potential for creating economic and other opportunities for people – while restoring nature and tackling climate breakdown,” said Rewilding Britain’s Director, Professor Alastair Driver, who carried out the data-gathering and analysis.

“Many of us knew that real-world rewilding projects produce food and create new job and volunteering opportunities alongside offering major biodiversity, flood risk, water quality, health and carbon sequestrationbenefits – but even we under-estimated the extent to which they do so,” he continued.

A variety of different-sized farms, estates and sites owned or managed by private landowners, charities andpublic bodies was studied. They include Upcott Grange Farm in Devon, Pirbright Ministry of Defence Ranges in Surrey, RSPB sites at Haweswater and Geltsdale in Cumbria, WWT Steart Marshes in Somerset, and Norfolk’s Wild Ken Hill estate.

The sites cover a combined total of 122,547 acres, of which 75,261 acres are rewilding – mostly on poorly productive or non-agricultural land, showing how rewilding can boost opportunities on marginal land while co-existing alongside farming for food on more productive land.

Jobs data was available for 22 of the 23 sites. Across these areas combined, full-time equivalent jobs increased by 47% – from 151 before rewilding began to 222 afterwards, over an average of 10 years. The variety of jobs involved also increased significantly, with many of the new jobs focused on nature-based tourism, monitoring, restoration activities, informal recreation, livestock management and education.

There was a remarkable nine-fold increase in volunteering opportunities, with associated benefits for people’s physical and mental health and wellbeing. On the 19 sites for which pre-rewilding data is available,the combined number of volunteers has soared from 50 to 428.

“These are really positive findings. This volunteer engagement boom brings with it physical health benefits from being in a nature-rich environment, the mental wellbeing and feel-good factor from being involved in such exciting and worthwhile projects, and opportunities to learn new skills,” explained Driver.

All of the sites still support grazing animals. Livestock data, available for 15 of sites, shows livestock 54% lower than previously, solely due to reductions in sheep numbers – but with numbers of cattle, pigs and ponies all increasing slightly.

“Natural grazing is an important part of healthy ecosystems – so as part of our practical support for farmers, we encourage appropriate replacement of native but missing wild populations of elk, wild boar and extinct cattle called aurochs with their closest equivalents. Small numbers of widely roaming rare breed cattle, ponies and pigs can closely replicate the natural grazing impacts of formerly native species,” Driver added.

There have been species reintroductions on 10 of the sites, with further introductions planned on most of those areas and on another six sites – the most numerous being beaver, white stork and water vole.

Although Britain should be teeming with wildlife, populations of species – from songbirds to insects to plankton – are collapsing, with some 56% in decline and 15% threatened with extinction.

Rewilding Britain is inviting those interested in applying for the Rewilding Challenge Fund to submit a short expression of interest before 17 January 2023.

Applicants must be members of Rewilding Britain’s Rewilding Network, or be eligible to join.

Successful applicants will be invited to submit a full application, and the winning project will be announced by the end of March 2023.

Learn more here, including how to apply.