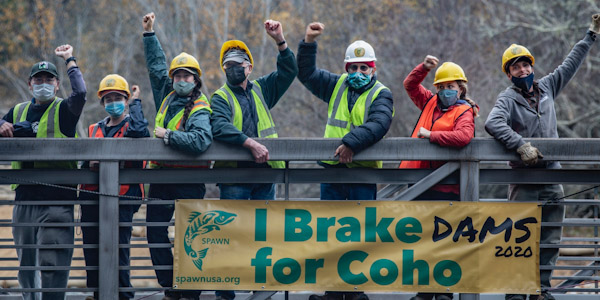 A free-flowing creek will replace Central California’s highest-priority fish passage barrier as the Salmon Protection and Watershed Network (SPAWN) completes a community restoration project along San Geronimo Creek, one of the most important watersheds left for endangered coho salmon.

By removing a 100-year-old dam and 20-year-old fish ladder on the former San Geronimo Valley golf course that was limiting the migration of endangered coho salmon and creating poor habitat conditions for other aquatic species, SPAWN created a free-flowing 250-feet long new creek channel where the former dam was.

Coupled with more work next year, the project will restore a total of five acres of creek floodplain habitat across a quarter-mile long of San Geronimo Creek. 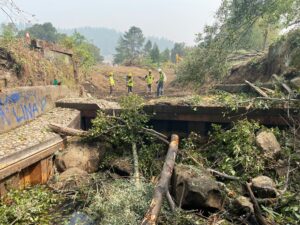 “Twenty years ago when we installed temporary metal sheet piles to create ‘Roy’s Pools’ to make it easier for migrating salmon to maneuver around the nearly century-old ‘Roy’s Dam’ we couldn’t even imagine the amazing and new ‘Roy’s Riffles,’ a comprehensive flood restoration project to give critically endangered coho salmon a fighting chance at survival in Marin,” said Todd Steiner, biologist and executive director of Turtle Island Restoration Network.

“Not even the coronavirus or a lawsuit by disgruntled golfers prevented us from making this fantastic project a reality,” he exulted.

In addition to providing critical habitat for young salmon the project will create valuable habitat for terrestrial wildlife and increase the amount of trees for nesting birds. A new, 100-foot pedestrian bridge has been installed over the creek to link trails and provide safe fish viewing over a wider, more complex and stable creek channel.

“We have an incredible opportunity to create habitat that benefits a wide variety of wildlife at Roy’s Riffles,” said Audrey Fusco, SPAWN’s nursery manager & restoration ecologist. “We are planting dozens of species of native plants, each of which offers food and shelter to insects, amphibians, birds, or small mammals.”

“There is so much impressive work that goes into creating a whole new environment designed to benefit both the environment and the community,” said Director of Watershed Conservation Preston Brown. “Knowing there is no fish barrier after so many years is exciting, and we are grateful to all of the organizations and individuals who are working on and supporting this long-awaited project.”

“Everything looks amazing, from water flowing through the site to willow stakes sprouting,” said Watershed Biologist Ayano Hayes. “The next part of the project will be completed next summer and involves creating a side channel, inset floodplains and an enlarged riparian forest that will provide winter refuge and additional feeding habitat for juvenile salmon.”

“There is so much impressive work that goes into creating a whole new environment designed to benefit both the environment and the community,” said Director of Watershed Conservation Preston Brown. “Knowing there is no fish barrier after so many years is exciting, and we are grateful to all of the organizations and individuals who are working on and supporting this long-awaited project.”

Nearly 25 years ago, SPAWN’s Executive Director Todd Steiner discovered migrating coho salmon stranded on the broken apron of Roy’s Dam that was built in the 1940s to provide a stock pond for cattle and the Roy’s family farm. To help rescue stranded salmon, citizens mobilized to relocate the struggling fish and SPAWN was born out of a grassroots effort to help the struggling fish.

To help get fish over the former Roy’s Dam NOAA Fisheries and other partners develop designs for a series of pools, resulting in the Roy’s Pools structure we know today. As the Roy’s Pools structures aged, however, it became clear that while the adult passage problem was solved, the juvenile passage—especially for outmigrating smolts—was still a problem. Fish would become trapped in the pools on their way to the ocean and could not escape. In the summer, young fry could not migrate upstream to cooler waters and were cut off from the habitat above the pools. Stagnant water in the pools created breeding sites for mosquitoes and a home for invasive bullfrogs.

In a collaborative effort beginning in 2012 with the Lee Family, the previous owners of the former San Geronimo golf course, SPAWN secured grant funds to design a functional restoration of the creek channel through the Roy’s Pools reach, where a natural channel would replace the metal and concrete structures. In 2012, SPAWN began the design process and hosted community meetings where neighbors gave input on the project and toured the site with the engineering team.

Turtle Island Restoration Network is a global ocean conservation nonprofit based out of Olema, California. Its SPAWN program restores endangered, wild coho salmon and the forests and watersheds they need to survive in West Marin County.

Learn more about this project.