Five years ago, thousands of acres of Prime Hook National Wildlife Refuge in Delaware lay under water, and wide breaches in the dunes at Fowler Beach threatened to swallow up the remaining beach. Refuge officials called sections of the refuge a dead zone, but no longer.

The task of restoring more than 4,000 acres of destroyed marsh and two miles of beach was completed three years ago. The $38 million project is now paying huge dividends. 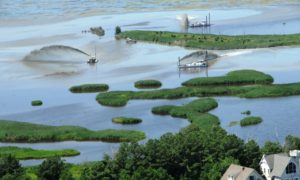 Dredging the marsh after hurricane Sandy.Photo courtesy of U.S. Dept. of Interior.

Now, in September of 2018, Al Rizzo, U.S. Fish & Wildlife project manager, stands on the replenished sand of Fowler Beach and is amazed how much marsh grass is growing in previously open-water areas. “The rate of recovery is mind-boggling, and after only two good growing seasons,” he says. “I love to see all this green. If we have this kind of response in two years, imagine what it will be in five years,” Rizzo said.

Prime Hook National Wildlife Refuge tidal marsh restoration project is one of the largest ever in the eastern U.S. The project restored a highly-damaged tidal marsh/barrier beach ecosystem covering about 4,000 acres within the former freshwater impoundment system on the refuge.

This coastal wetland restoration improves the ability of the refuge marshes to withstand future storms and sea level rise and improves habitat for migratory birds and other wildlife. The restoration project is supported by funding from the Hurricane Sandy Disaster Relief Act.

Here are some recent U.S. Fish & Wildlife Service updates on the project:

Refuge staff and partners spent the spring and summer of 2017 conducting continued monitoring of the restoration project. Water levels, salinity, nutrients, and flow continued to be monitored in partnership with the Delaware National Estuarine Research Reserve and the University of Delaware. This monitoring is ongoing year-round, and enables the refuge to track how the restored tidal hydrology in refuge wetlands translates into new patterns of water levels, sediment concentration, and salinity. There are some small areas within the wetlands that need additional work, and the restoration project will benefit further from planned upgrades to culverts to be done by DelDOT. But overall, the system is showing the expected positive response.

It was an great year for the beach-nesting birds that have so quickly responded to the impressive new beach along the refuge shoreline. Last year, the first ever piping plover nest was established on the refuge. Piping plovers are a federally threatened species of considerable conservation interest to the refuge. In 2017, there were 6 nests that successfully fledged a total of 12 young plovers! In addition, there were nesting American oystercatchers and least terns. The restored beach is open to visitors again, at least until the breeding season begins in 2018.

Refuge staff and interns carried out another season of vegetation surveys to monitor the wetland response. These ground efforts are coupled with remote sensing analyses to track changes in the amount of open water and vegetated marsh, and the shifts in plant species composition. Between 2015 and 2017, there was a reduction of 700 acres of open water and an increase of over 500 acres of vegetated marsh in the project area. The amount of desirable salt marsh and brackish species such as Spartina alterniflora increased. Planted areas of the back barrier marsh behind the restored dune are flourishing. Thus far, recovery of the restored marsh is well on track.

The Prime Hook NWR tidal marsh restoration project has been the largest of its kind ever on the east coast, and therefore has and will continue to gain a lot of attention by others who work on restoration science and coastal ecology. This week, members of the refuge staff and key partners from DNREC attended the 2016 joint summit of Restore America’s Estuaries and The Coastal Society, held in New Orleans. The theme of the conference was “Our Coasts, Our Future, Our Choice” and it was the largest national gathering of the coastal restoration and management community in 2016.

Prime Hook NWR was the topic of an entire dedicated session, which included individual presentations on the history of our wetland management challenges, the planning and permitting of the restoration project, the many partnerships that were key to success, and the abiotic and biological monitoring conducted thus far. Scientists and wetland managers around the country will continue to learn from the work we have done, and that we will continue to do through ongoing monitoring. Although the impressive and complex construction of the restoration project is complete, the story of our wetlands’ recovery is only just beginning! Stay tuned for future updates and photos in the upcoming months.

The construction work on the refuge’s large tidal marsh restoration project is essentially complete! The past 15 months have been a whirlwind of restoration activities along the refuge shoreline and within the marsh interior:

The biological response to the restoration was immediate and impressive!

Spring brought the horseshoe crabs to the brand new beach to spawn, in larger numbers than anticipated. The first documented piping plover nest was found on the restored shoreline, along with nesting by other birds of interest such as American oystercatchers and least terns. Many areas of the restored wetland were covered with new vegetation this year, where just last year there was shallow open water.

Monitoring of the biological response will continue over upcoming years. The refuge works closely with partners at the Delaware Department of Natural Resources and Environmental Control (DNREC) and the University of Delaware to monitor vegetation, birds, fish, and physical factors such as water quality and marsh elevation.

See USFWS updates dating back to the project’s launch.