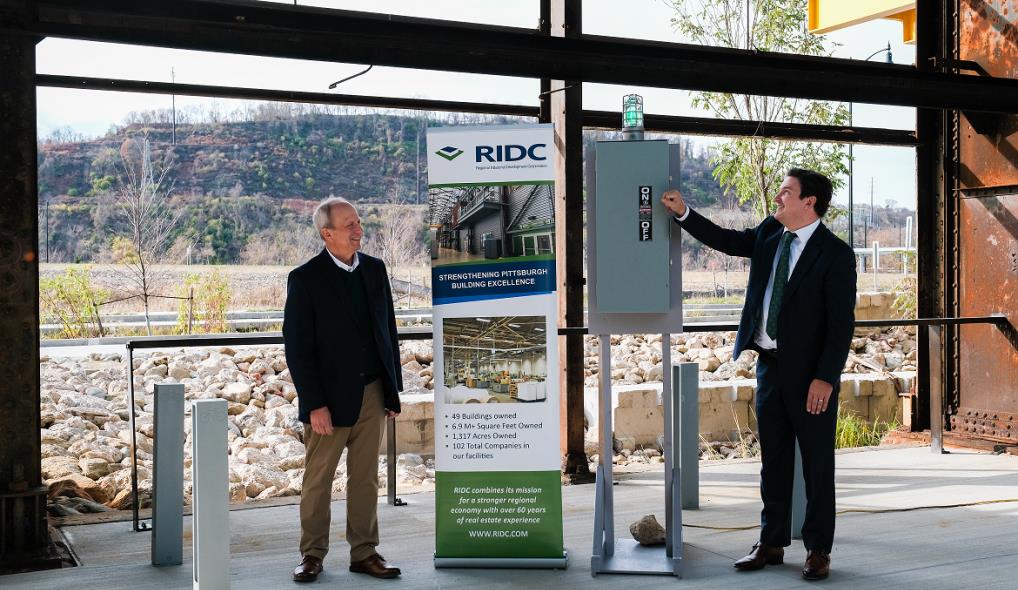 Over the years, we’ve had quite a few articles about the great work being done by the Regional Industrial Development Corporation of Southwestern Pennsylvania (RIDC) in Pittsburgh, Pennsylvania, including this Guest Article by their President, Donald F. Smith, Jr..

More recently, we had this article about how RIDC is installing the largest single sloped solar array in the U.S. on a historic 1943 factory building at a Pittsburgh brownfield redevelopment project called Hazelwood Green. 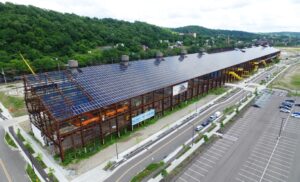 “The solar array on top of Mill 19 is the largest of its kind,” said Smith. “What was once a rusty old steel mill is now a model for our region’s innovative, cleaner future. When people look back, generations from now, the way we look back today on our days as an industrial powerhouse, we hope they will see Mill 19 as a turning point for the Hazelwood community and a catalyst for wider revitalization and economic and environmental renaissance.”

Now, on November 20, 2020, the switch has been thrown on that power system. One of the largest rooftop solar arrays in the country has gone live at RIDC’s Mill 19. One cool feature is a publicly-accessible monitor that tracks Mill 19’s solar output in real-time.

“We have done so because Mill 19 is the launching pad for Hazelwood Green – a project that will make life-changing differences for the good people of Hazelwood, who too often have been left behind, and for all of the greater Pittsburgh region. Mill 19’s solar panels reflect Pittsburgh’s national leadership in both sustainability and contemporary economic development. This project demonstrates that those two worthy objectives don’t have to be at odds. We can do both together,” he continued. 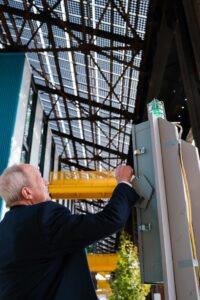 The massive 110,000 square feet of high-powered solar panels covers the entire rooftop area and will produce over two million kilowatt hours (kWh) per year, enough to power the entire existing facility, according to Don Smith.

“The activation of this solar array at Mill 19, home to CMU’s (Carnegie Mellon University) Manufacturing Futures Initiative, is another example of the power of public-private partnerships to embrace a future driven by innovation,” said CMU President Farnam Jahanian.

“Carnegie Mellon is grateful to our foundation and local community partners, our elected officials, and RIDC for helping to make sustainability a driving force behind Mill 19. This commitment will further catalyze the future of Hazelwood Green – not just as a hub for new technologies, but as a model for sustainable development that enhances quality of life for citizens,” he added.

The mission of RIDC is to catalyze and support economic growth and high-quality job creation through real estate development and finance of projects that advance the public interest. A not-for-profit entity, RIDC owns over 2,800 acres of land in 11 industrial parks and manages over 50 buildings.

“I’d like to congratulate everyone involved in this project for their ingenuity and forward thinking,” said Senator Jay Costa. “Projects like this are the future and it’s great to see it coming to fruition in our community. Renewable energy will soon be the norm due to leaders like those who worked on Mill 19.”

“Pennsylvania has long been known for its innovation and leadership, and this announcement of the nation’s largest rooftop solar array builds on that legacy, benefits the community, and reduces our carbon footprint,” said Department of Community and Economic Development Secretary Dennis M. Davin. “The Wolf Administration applauds RIDC and Carnegie Mellon for being a model for innovation in the commonwealth and beyond.”

“This hallmark solar project wouldn’t have been possible without the continued support of the Hazelwood community, RK Mellon Foundation, our local government officials, or our partners in solar panel installation—Scalo Solar Solutions,” said Tim White, RIDC Senior Vice President of Development. “Piece by piece, solar panel by solar panel, we took an abandoned relic of our industrial past and transformed it into a property with a productive and green future.”

The installation of the solar array was recently completed by Scalo Solar Solutions.

Unless otherwise credited, all photos are courtesy of Michael Savisky / Make Roots.