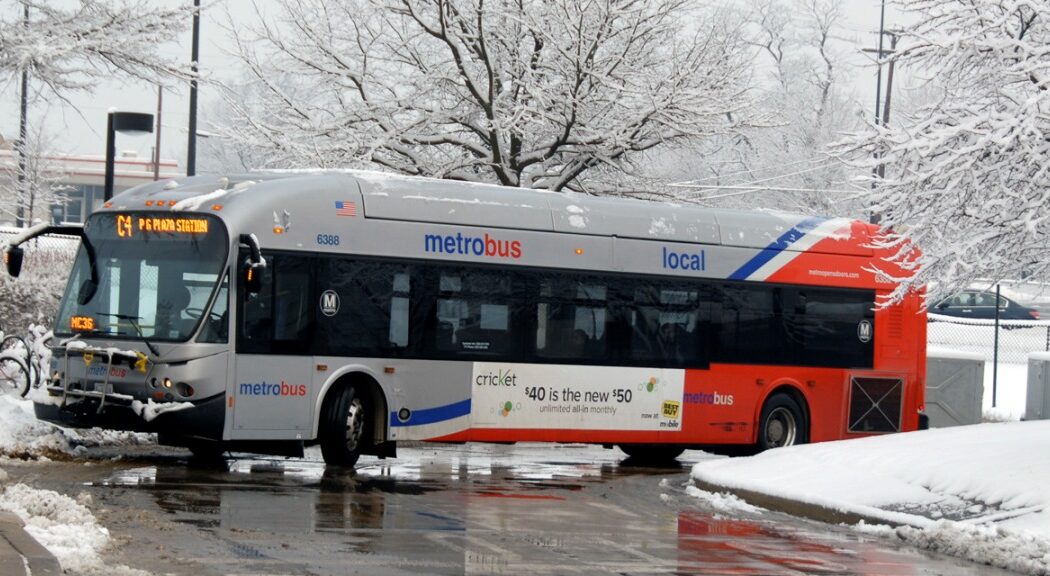 On October 11, 2022, the Washington Metropolitan Area Transit Authority (WMATA, AKA: Metro) launched the first comprehensive effort in 50-year history to re-envision and revitalize a their bus network in America’s National Capital Region.

It’s none too soon, given the poor condition (both economic and quality of service-related) of Metro’s rail service. Just last night, my wife, Maria, and I (Storm Cunningham) were returning from the wonderful 41st Takoma Park Street Festival (inside the Beltway in Maryland), and had chance to observe the rail system’s sorry state.

The system is hemorrhaging cash, yet the Takoma Park station manager was letting people jump the turnstiles willy-nilly. In his defense, he might not have known about it, as he seemed to be fast asleep. It was rainy and chilly, yet when we boarded the train, the air conditioning was on full blast, making everyone very uncomfortable. On the first train, the driver’s announcements were at such a low volume, and he mumbled so badly, that not even a native English speaker like myself could understand a word he said (pity the immigrants and foreign tourists). On the second train, the volume was so painfully loud that many passengers covered their ears with each of the driver’s announcements.

So now, Metro is going on the road with Better Bus, a new initiative to rethink, redesign, and revitalize bus service. Since the bus and rail systems are intrinsically linked, this will hopefully result in better train service, as well.

In a bold inaugural effort to redesign the current bus network, Metro is holding events across the region to hear from customers and the community. Together with Metro, customers will (again: hopefully) shape the future of bus service.

The bus network redesign is just the beginning of a reimagined Metro that better serves the needs of customers, including the transition to zero-emission buses, construction of all-electric bus garages, priority bus lanes and signals, bus stop and shelter improvements, and ensures equity of service across communities.

“We are rethinking the entire network, both rail and bus, and asking the community ‘what do we want Metro to be?’ The Better Bus initiative gives you an opportunity to be part of that discussion to improve bus service,” said recently-hired General Manager and Chief Executive Officer Randy Clarke. Clarke might be the ultimate example of someone whose work is cut out for them.

“We need to hear from as many customers as possible about the kind of service they want. I encourage the region to join us at events, take the survey and stay engaged along the way whether you take the bus every day, have ridden the bus a few times before, or want to ride the bus but don’t. Let’s make the bus work better for you and for the region,” he added.

Metro has launched the first phase of community-focused outreach, including approximately two dozen public events over five weeks and an online survey.

“We are proud to be partners with other regional bus providers to expand transit options for our region,” he continued.

As part of the initiative, Metro will also support partner agencies in Prince George’s County (TheBus) and the City of Fairfax (CUE) in redesigning their local bus networks.

“We are excited to embark on this effort to provide better access to jobs, opportunities, and destinations,” said Prince George’s County (Maryland) Executive Angela D. Alsobrooks. “Metrobus and TheBus are critically important to our County’s continued success and shared prosperity.”

The Better Bus initiative builds on the previously completed Bus Transformation Project (BTP), a comprehensive study with local partners across the region to create a roadmap to transform bus service.

“Metro is the economic backbone of the region, and a critical part of the overall network are buses. The bus network provides 500,000 trips each and every day and literally keeps our region moving by taking people where they need to go,” said Metro Board Chair Paul C. Smedberg. “We will redesign and enhance the critical bus network by listening to our customers and working together.”

Metro heard from thousands of people through in-person events, open houses, surveys and social media to develop recommendations to make bus a mode of choice on the region’s roads.

“Providing effective bus service throughout our county and region is critical to the mobility and quality of life of thousands of our residents,” said Montgomery County (Maryland) Executive Marc Elrich.

“Montgomery County began its bus network assessment effort, Ride On Reimagined, this past February. I am glad that we are working with our partners at WMATA to compare findings, create solutions and work together to implement strategies. Ride On and Metrobus serve many of the same customers – being united in our plans and policies will create a more efficient, effective and integrated bus transit system. I encourage all local public transit riders to participate in the surveys,” he explained.

The bus network redesign is an ambitious undertaking and one of the BTP’s key recommendations. Other BTP proposals such as free bus transfer to/from rail and more frequent all-day bus service have already been implemented by Metro in the past year.

This is the first holistic redesign of the Metrobus network, which will mark its 50th anniversary in February. The redesign will work toward a bus network that is easier for customers to use and understand, and better align with where and when people want to travel.

“I am excited about the opportunity to improve bus service for District residents, especially for the transit dependent,” said DC Councilmember Trayon White. “A large majority of Ward 8 residents rely on public transportation. I strongly encourage residents to participate in this collaborative process and allow their voices to be heard.”

The initiative will provide the opportunity to reassess regional travel patterns, how frequent buses come and create a more equitable transit network that serves local communities, such as the needs of essential workers. This includes coordinating service with bus priority investments—like bus lanes and transit signal priority—across the region.

Everyone in the region is encouraged to provide feedback online and at public events – regardless of whether they are an existing bus customer – to help shape a new, Better Bus network.