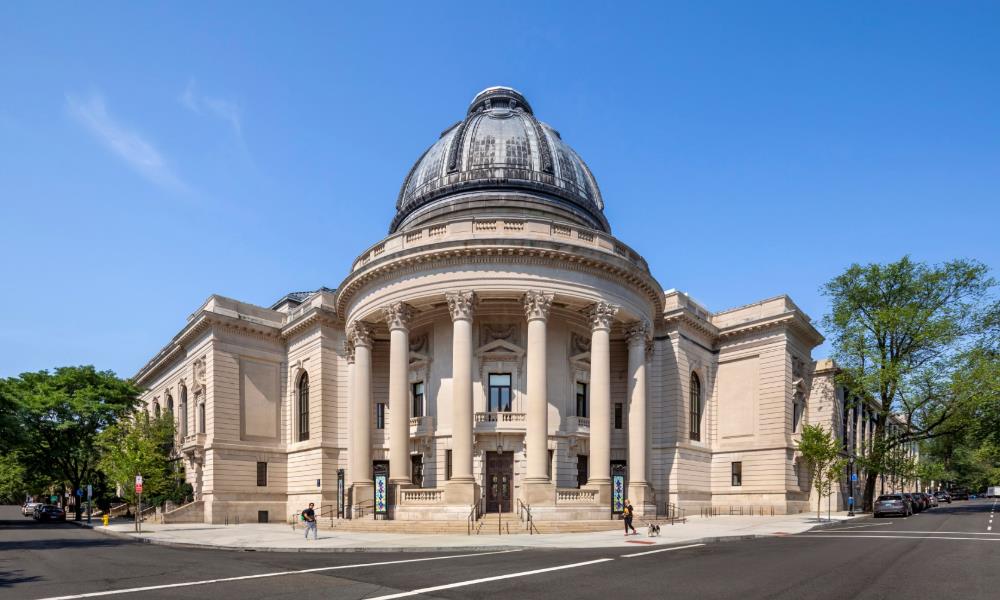 On May 3, 2022, Robert A.M. Stern Architects (RAMSA) unveiled the design of their renovation and restoration of the historic Schwarzman Center at Yale University.

Located in the Bicentennial Building’s north wing in the heart of Yale University’s campus, the center recently opened its doors in fall of 2021 after a significant overhaul of the building, which began in 2017. 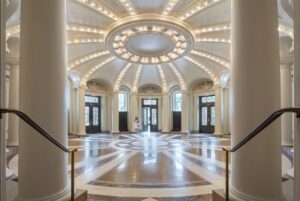 Yale University engaged RAMSA to lead the transformation of the Schwarzman Center, including the historical preservation and the design of the new additions. The RAMSA team, led by Partners Graham Wyatt, Melissa DelVecchio and Jennifer Stone, worked with an advisory board consisting of prominent individuals in the arts world, creating connections for Yale and the arts community to help sustain programming at the Schwarzman Center.

Before the building closed for renovation, a series of preview events were held to highlight future possible events in the renovated building, including a hackathon, a dinner presentation on sustainability, and a presentation on Prince and David Bowie’s contributions to the musical world.

“It’s been an honor to work with Yale University to restore and reinvent Yale’s Bicentennial Buildings, creating a new campus center that connects students, faculty, staff, alumni and visitors for the first time ever through dining and arts events. The preservation of these important historic spaces — at the heart of the Yale experience — along with new additions that support arts and cultural programming, will enrich student life, building new bridges across Yale’s community,” says DelVecchio. 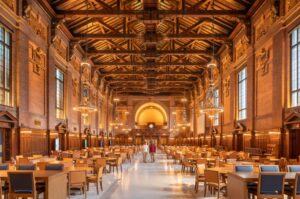 “The flexible and technologically-advanced spaces further Yale’s values – promoting cross-disciplinary collaboration, fostering a sense of belonging, and elevating the importance of wellness. We look forward to seeing Yale’s vibrant culture come to life at the Schwarzman Center,” she added.

As one of the first buildings built by Yale, its original purpose was to unite students from Yale College and the Sheffield Scientific School. As Yale grew and expanded, the intellectual and social focus of the student body grew increasingly disconnected.

Today, the renovated Schwarzman Center achieves a multitude of goals: bringing Yale students together as one unit; serving as a hub of intellectual and student life; encouraging socialization through dining, events and performances; and fostering relationships among the wider Yale community. 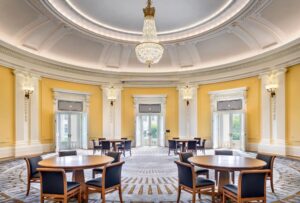 The idea for a new campus center came about thanks to a study conducted by Yale, which indicated a high level of student support. In addition, there was an urgent need to renovate the Schwarzman Center; the floors in the Commons – the University’s historic dining hall – were also falling into severe disrepair as the original cinder fill terrazzo floor was structurally unsound and could no longer bear the weight of a dining hall.

The Schwarzman Center renovation was made possible thanks to Stephen Schwarzman, a Yale graduate and CEO of Blackstone, who donated over $100 million to the project, both for the building and for support programs.

The building’s physical expression represents the university’s mission of combining historic preservation with modern technology and increased social space. RAMSA’s preservation efforts focused on the Commons, all the spaces in Memorial Hall, including the war memorial – which inspired Maya Lin’s design for the Vietnam Veteran’s memorial – the President’s Room, as well as the Dome Room, which was a yearbook office for 30 years. 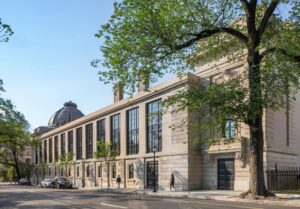 For the exterior, in keeping with the design team’s goal of carving out new programmatic spaces, the team removed the one-story underground moat space along Grove Street and built a three-story addition, which was inspired by the original proposal from Carrère & Hastings that detailed an addition to the building’s original construction just a few years after its completion. An underground addition was also added and the new Hewitt Plaza was created.

The RAMSA team paid particular attention to details in order to honor the history and traditions of the Center while carrying it forward into the future. This includes the warm wood of the Commons which combines the traditional Yale aesthetic with modern detailing. The remaining marks on the brick after cleaning created a patina representing hundreds of years as an active university. 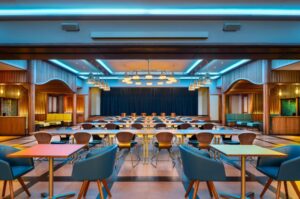 All historic roof paneling was maintained and lighting fixtures were restored, as was the decorative painting on the wooden trusses.

In Memorial Hall, asbestos was removed from the President’s Room and classical detailing was reinstated, and lighting was fixed to enhance accessibility for dining and catering. In the Dome Room, old plasterwork was replicated with molding.

This renovation addressed many accessibility issues in the historic building. A new ramp was added in the gallery to create accessible connections to the outdoor Hewitt Plaza. 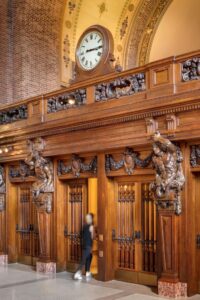 In addition, the design team added two sets of public elevators to the Commons space, which became the main core of accessibility for the building.

A crowning achievement was the ambitious renovation of the 66-ft-high Commons, which was largely preserved and cleaned of a century’s worth of smoke and grime.

The foundation, which had fallen into severe disrepair, was also dug up and lowered 30 inches to address the damage. This also allowed for new programming space to be created while ensuring structural soundness.

The Commons was also successfully optimized for performance. As it had previously relied on people coming in and out for heating and cooling, it was updated with a new, hidden, performance-ready HVAC system. The team also added targeted lighting, integrated projection and blackout shades. 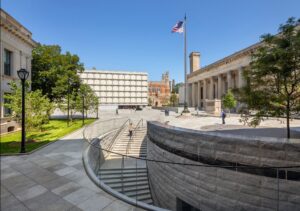 The programming supported the campus’ mission by expanding dining and performance spaces. The team introduced the Underground, a casual dining space with a stage, backstage area, and partition. The Dome Room is another flexible performance space, and doubles as a space for masterclasses, events and lectures.

Other new casual dining options include the Well, a bar occupying the former food storage space under the Rotunda and the Bow-Wow, a new food shop.

The President’s Room was also entirely renovated and designed to allow for important events hosted in the Yale calendar.