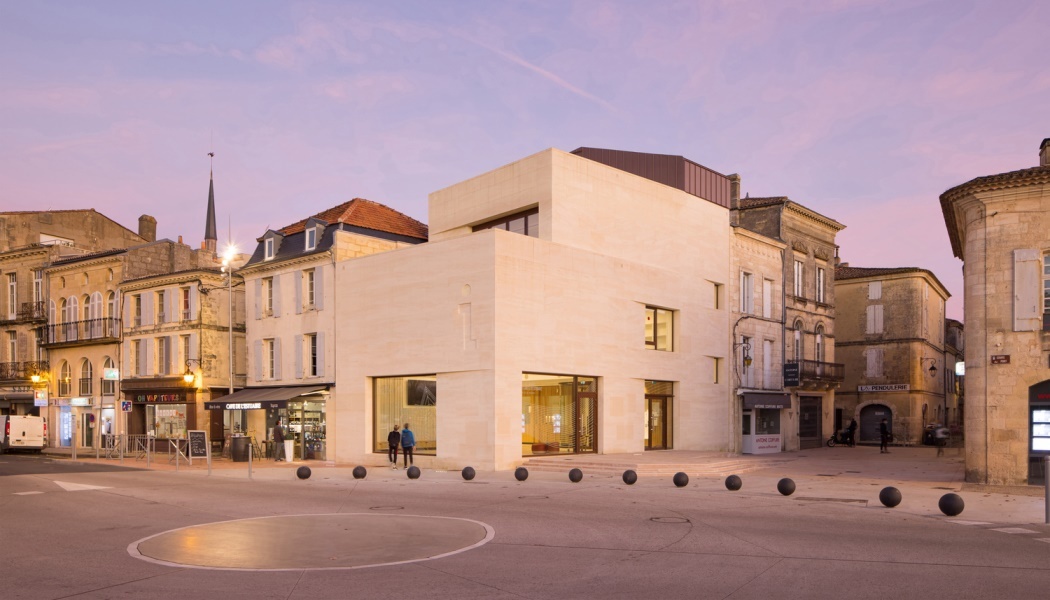 In Blaye, France, the new Blaye Tourist Office faces the Vauban Citadel, which is a UNESCO World Heritage Site.

UNESCO guidelines demand that World Heritage Sites pay close attention to maintaining authenticity, not just of building themselves, but of the entire area that forms the contect for the buildings.

The site of this new building has obviously been redeveloped many times over the centuries, so the focus of the designers at Gayet-Roger Architects was on that context, rather than on recreating any of the buildings that had previously occupied the site.

The use of local stone was thus an obvious choice for the architects, who wanted an architecture that would dialogue with the history of its region thanks to material and the knowledge of its use.

Here’s how the architects described their approach to the project: 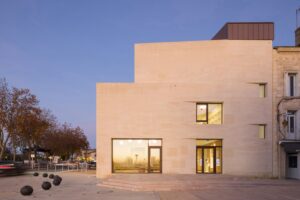 The project fits with finesse and conviction into a rich heritage context, without making any concessions to its contemporary design.

The simplicity and sobriety of the building contrast with the historic facade and give the Tourist Office high visibility in the town. Its volumetry dialogues with the surrounding old buildings, while the openings and terraces offer different views of the Vauban Citadel.

The atypical form of the parcel gives multiple orientations and organized the different spaces. The building has four levels offering two terraces with privileged landscape views. On the ground floor, the wide reception area invites tourists to enter. On the upper floors, the offices are bathed in natural light and a large terrace extends the meeting room. The top floor offers a public viewing area that allows tourists to contemplate the Vauban Citadel. 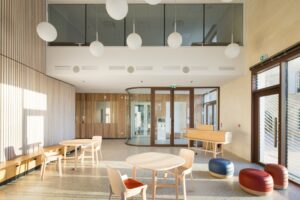 The volumes make it possible to host different events such as exhibitions and tasting sessions. The interior has been designed to offer a wide variety of spatial arrangements: the mobile furniture made of oak can be modulated according to different events.

Local limestone was used to build the walls on the citadel side. The use of stone as an ecological solution goes hand in hand with a local resource. In this way, limestone from Sireuil and Frontenac quarried less than 80km from the site were chosen.

Their specific qualities allow them to be used at different points of building: the tender stone from Sireuil for the assembly of walls and the semi-hard stone from Frontenac for window sills and acroterions.

Visiting the quarries enabled the architects to observe the extraction techniques and enabled them to design the facade based on the dimensions of the extracted blocks. 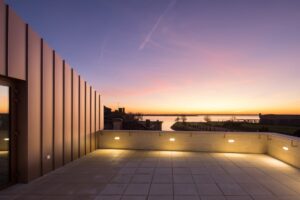 In order to build with massive stone, architects and engineers developed a «dual wall» to meet thermal standards. The wall is composed of three parts: a 10- centimeter stone exterior, a layer of insulation, and a 25-centimeter interior layer of stone, offering the benefit of thermal inertia.

An air gap and vent opening at the top and bottom of the wall provide air circulation and allow the stone to breathe. Structurally, the walls of the Tourist Office are built from stone, and concrete is used for coupling the large wall opening and the floor.

The stone blocks are delivered to the site ready to be laid. As this material, the installation technique is traditional: the stones are laid with a lift strap and a traditional mortar of lime and sand is applied between two blocks.

With this project, the architects wanted to demonstrate that it is possible to build while taking account of the social, environmental, and heritage dimensions of a place.

All images are by Arthur Pequin / Gayet-Roger Architects.