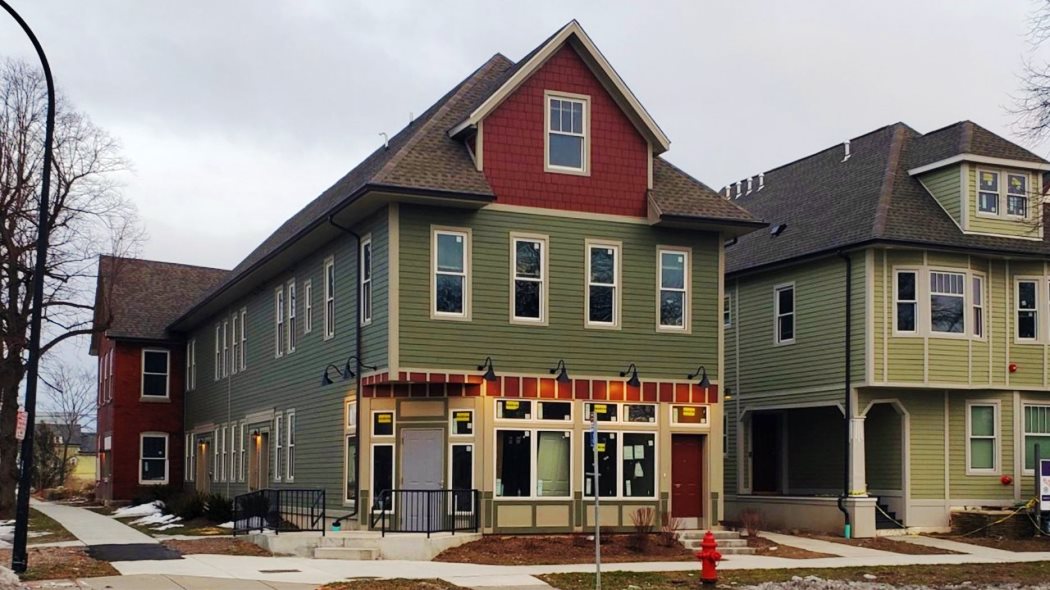 On August 10, 2022, local leaders in Buffalo, New York celebrated the completion of a $2.4 million mixed-use redevelopment that brings 11 affordable homes and new commercial space to the city’s rapidly-revitalizing East Side.

The project, called Cigar Factory Apartments, consists of the redevelopment of the historic Jankowski Cigar Factory site and the new construction of an adjacent building.

“This development is a major component of our commitment to doing right by East Buffalo,” Governor Kathy Hochul said.

“Thanks to $2 million in state funding, the Cigar Factory Apartments have transformed an old cigar plant into beautiful, safe, affordable homes. With today’s grand opening, in addition to the $50 million to support homeowners and revitalize commercial districts, we are investing in East Buffalo to uplift the entire community,” she added.

The cigar factory site, located at 595 Fillmore Avenue, was purchased by Broadway Fillmore Neighborhood Housing Services (BFNHS) in 2015, but much of the building was destroyed by fire a few weeks later.

State Senator Tim Kennedy said, “This project is yet another example of what can be achieved when we commit to preserving our city’s past and incorporating it into the vibrant future we’re building. Through the vision of Broadway-Fillmore Neighborhood Housing Services Executive Director Stephen Karnath and Carmina Wood Morris, and the support of New York State, this site is coming alive once again, and turning a historic structure into a community-centered space.”

BFNHS was able to save two buildings at the rear of the property, including a brick building where tobacco leaves were cured and prepared for rolling. BFNHS subsequently acquired the adjacent site at 591 Fillmore.

The redevelopment sits at the primary gateway to Buffalo’s historic Central Terminal, which itself will soon be redeveloped with over $60 million in State Regional Revitalization Partnership (RRP) funding the Governor announced in June, and is near the century-old Broadway Market, which will also receive $37 million for capital improvements from the RRP.

Mayor Byron W. Brown said, “I congratulate Broadway Fillmore Neighborhood Housing Services for its tenacity in completing this affordable housing and retail project. Converting the former Jankowski Cigar Factory into residences was a daunting effort, but overcoming the 2015 fire, required a commitment that went above and beyond. This development, located at the gateway to the Buffalo Central Terminal, is an important addition to overall City and New York State efforts to revitalize the Broadway Fillmore corridor and East Buffalo.”

In the 2022-23 State Budget, the Governor introduced and successfully secured a new $25 billion, five-year, comprehensive housing plan that will increase housing supply by creating or preserving 100,000 affordable homes across New York including 10,000 with support services for vulnerable populations, plus the electrification of an additional 50,000 homes.

The Cigar Factory Apartments includes seven one-bedroom and four two-bedroom apartments, plus a small ground floor coffee shop. All apartments are affordable to households with incomes below 50 percent of the Area Median Income.

New York State Homes and Community Renewal Commissioner RuthAnne Visnauskas said, “Cigar Factory Apartments are a valuable component of the State’s ongoing investment in Buffalo’s East Side. This development provides safe and comfortable affordable homes for the 11 households who now live here and has created valuable commercial space at a strategic location in the Broadway-Fillmore neighborhood. We applaud Governor Hochul for her ongoing commitment to the East Side community and thank our partners at Broadway Fillmore Neighborhood Housing Services for their support in making this development possible.”

The New York State Energy Research and Development Authority has committed $11,000 in support through its Low-rise Residential New Construction program. HomeFront provided $160,000 and the city of Buffalo provided $11,000.

Governor Hochul previously announced $50 million of targeted investments as part of the state’s ongoing efforts to address the immediate needs of the East Buffalo community in the wake of the white supremacist terror attack at Tops Supermarket on May 14, 2022.

Historic redlining and modern predatory lending practices have significantly destabilized housing in East Buffalo and stymied the ability for individuals, families, and the community to build wealth.

Doreen M. Harris, President and CEO at the New York State Energy Research and Development Authority, said, “With the grand opening of Cigar Factory Apartments, residents of Buffalo’s East Side now have greater access to affordable housing that is energy efficient and environmentally responsible, demonstrating historic buildings can be brought into a clean energy future. NYSERDA is pleased to support this project, and others like it, to ensure that New York’s most vulnerable citizens are benefiting from the State’s transition to a carbon-neutral economy with healthy, resilient, and climate friendly buildings to live in.”

The State has taken immediate steps to assist struggling homeowners in East Buffalo with an investment of $34.5 million, including:

Stephen Karnath, Executive Director of Broadway-Fillmore NHS, Inc. & HomeFront, Inc. said, “This project has overcome a lot of obstacles to get to this day, including a devastating fire shortly after we acquired it, and a pandemic which significantly slowed the pace of construction. It may be a small project, but we believe it can be transformational. It echoes its past as a cigar store and family home, and it offers a gateway to the future of the Broadway Fillmore neighborhood.”

Governor Hochul recently announced that applications opened August 9 for these comprehensive housing programs supporting residents of East Buffalo. Residents can call 211 to learn about housing programs and how to apply.