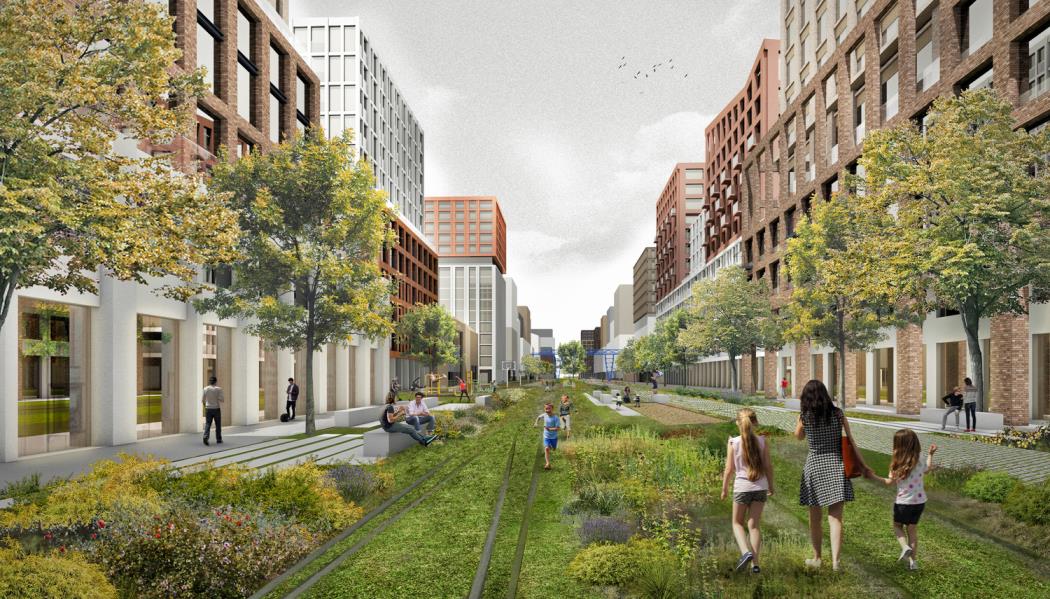 In St. Petersburg, Russia, KCAP and Orange Architects are working in a consortium with A.Len Architectural Bureau to transform a former railway yard on Ligovsky Prospekt into a new residential district with communal facilities, retail and extensive greenery. 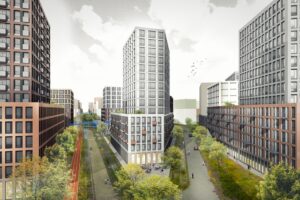 Linear parks and landscaped boulevards that follow the historical railway tracks are at the origin of the new urban framework and will offer the backdrop for a high quality living environment, where the buildings are characterized by industrial aesthetics.

KCAP+ORANGE Architects and A.Len Architectural Bureau prepared a proposal for the territory planning of the former Tovarno-Vitebskaya railway yard in the south-eastern part of the grey belt of St. Petersburg.

This project is a continuation of the Glorax Development‘s Ligovsky City neighborhood development project, where the first residential complex is already in operation, while the second one is nearing completion. The area under consideration, 30 hectares (75-acre), is well connected to city. In the North, in close proximity to the site, is planned to build the new Borovaya metro station. 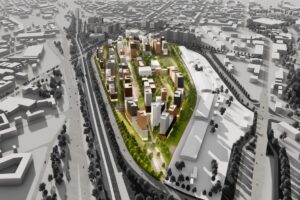 The global goal of the project is to create a new attractive residential district of St. Petersburg, designed for 8600 people, with its own commercial and social infrastructure. The plans include restaurants, cafes, leisure facilities, street retail, service companies, sports facilities, four kindergartens, one primary and one secondary school, underground and surface parking lots.

The Chairman of the City Planning Council, V. Grigoriev, defined the project as a positive example of resuming international design in the city: “The participation of renowned architects from all over the world has always contributed to the development of St. Petersburg.”

The carefully planned intervention is an adaptive re-use that promotes new urban life, based on a mix of historical and modern structures and on the contrast between large and small scale solutions. The industrial morphology of the area, with the rails and loading platforms, creates a beautiful and well organized pattern that becomes the basis of the design idea. 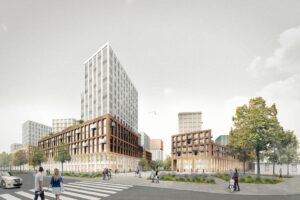 The architects want to re-use the spatial organisation of the site, placing buildings varying between 6 and 15 floors height on the pre-existing platforms. For the typical Ligovsky building, bigger and smaller volumes are stacked with contrasting industrial facades recalling the heritage of the site. The base volumes located along the main boulevards provide a special plinth with a height of one or two floors, which will create an interface between buildings and streets or parks.

“We want to create an active and landscaped environment where you can feel the history of the railway and live with the people around you. An area that simultaneously is smoothly connected to the city of St. Petersburg,” stated Patrick Meijers, partner at Orange Architects.

The rail tracks are interpreted as linear parks, enriched by witnesses of the past. The architects made a precise inventory of what could be reused and integrated in the public space: small buildings, blue cranes, tracks, poles, to give historical depth and atmosphere to the new neighbourhood. The long green corridors in the building fabric of Ligovsky City, running along the North-South direction, offer many opportunities for spending quality time outdoors, for everyone, from walkways to quiet corners, from running tracks to yoga fields.

For the various zones of the project there will be specific places. While the public parks are developed along the main railway tracks there are also more intimate walkways and the courtyards between the buildings. This creates a network of smaller and more private open spaces for the residents and the users of the communal facilities. 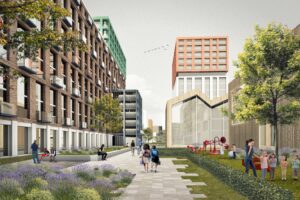 “For us, Ligovsky City means living in a quality green environment. When you look out of the window you look onto green. When you step out of the door, you step into a park,” explained Ruurd Gietema, partner at KCAP.

In the north of the site, the buildings are combined into an urban ensemble, the “Crown”, which creates a strong and recognizable entrance, opposite the new to build metro station “Borovaya”. With various commercial and leisure facilities, the area will be the new urban center for Ligovsky and the point of attraction for St. Petersburg. To the South, the section narrows and the buildings grow upwards, where three towers create a strong building edge, called “Trio”.

Ligovsky City is a project where the proposed industrial character of the urban solution and the architecture preserves the memory of a place and emphasizes its unique character and at the same time creates a modern, dynamic, and high quality green residential area.