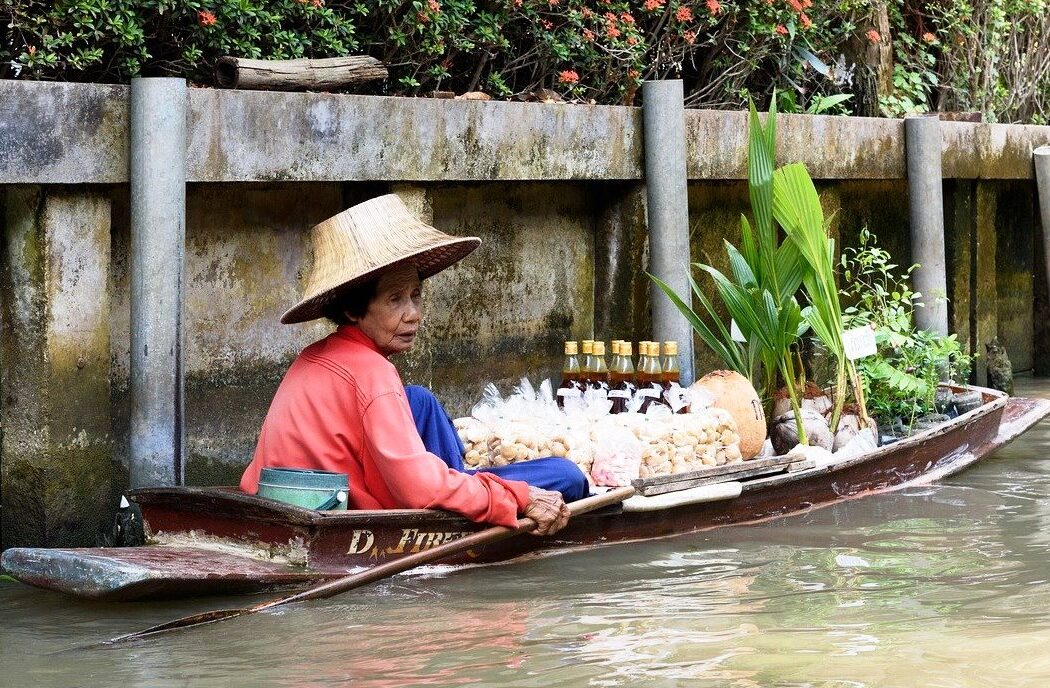 Until recently, Nuttanakul Somsak‘s daily commute to work was unlike that of most residents in Bangkok, Thailand: she hopped on a boat for about half the price of a train ticket, and taking just a fraction of the time that a taxi or bus did.

For three years, Nuttanakul boarded one of the passenger motor boats that ply the fetid canals in Bangkok, carrying about 30,000 of the city’s more than 8 million residents every day. 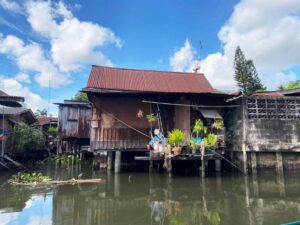 Homes by the side of a canal, or klong, in Bangkok. Photo courtesy of Thomson Reuters Foundation/Rina Chandran.

“It was cheap, and it was fast. If I had to take a taxi or bus, I would have had to wake up an hour earlier and it would have cost me more,” she said.

“The only downside is that the canal smells: one time, I got splashed by another boat, and had to buy a new skirt to change into for work. But I would still gladly take a boat if my new workplace was connected to a canal,” added Nuttanakul.

Bangkok, built on the floodplains of the Chao Phraya River, was once known as the Venice of the East for its sprawling network of canals, or klongs.

The canal and river network stretched hundreds of kilometers, connecting homes, temples and public spaces, serving as corridors of transport of goods and people, and as centers of commerce with scores of floating markets.

But from early in the 20th century, many canals were filled in and built over for roads. Others became clogged with trash and sewage, even as roads gradually choked with traffic, with the Thai capital rated among the most congested in the world.

Now, a plan to restore some of the canals and introduce electric ferries aims at easing traffic congestion, as well as creating a more livable city with environmentally friendly public transport and less pollution. [Note from Storm Cunningham: That’s a strategy with the level of integration one might expect if a certified Revitalization & Resilience Facilitator were involved.]

“People in Bangkok see the canals as an eyesore, but we want them to be viewed as an asset,” said Niramon Serisakul, director of the Urban Design and Development Center (UddC), which has advised the Bangkok Metropolitan Administration (BMA) on improving mobility.

“Especially now, when people are concerned about taking public transport during the coronavirus, river and canal transport can be a pleasant alternative to driving if it is made more convenient,” she told the Thomson Reuters Foundation. 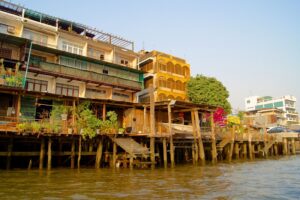 Bangkok is in the floodplains of the Chao Phraya River. It was once called “the Venice of the East”, due to its vast network of canals. A new strategy will restore the canals and add electric ferries to ease traffic congestion, thus creating a cleaner, more livable city and stronger economy. Photo by Uwe Schwarzbach / CC BY-NC-SA 2.0.

From Rome to Tokyo, many of the oldest cities in the world grew around rivers that were key for trade, transport, culture and safety, besides supplying drinking water.

As road and air transport became more popular and as populations expanded, however, rivers and other waterways were largely ignored by policy makers and residents alike, often becoming heavily polluted from sewage and industrial waste.

But in recent years, cities from Chicago to Seoul have revitalized waterfront areas for economic and environmental benefits, with authorities even giving some rivers and lakes the same legal rights as humans to better protect them.

As climate-change impacts worsen, planners are keen to harness the cooling effect of rivers to combat the urban heat island effect, and their role in flood mitigation.

“Our homes once faced the klongs, but we then built walls and turned our backs to them and all the benefits they bring,” said Kanjanee Budthimedhee, chair of the design and planning program at King Mongkut’s University of Technology.

“If we revive the canal network, we can solve pollution, congestion and environmental issues quite cheaply,” said Kanjanee, who backs a canal-and-cycling network to address last-mile connectivity in Bangkok’s public transport system.

Bangkok is forecast to be one of the urban areas hit hardest by warming temperatures, with nearly 40% of the city expected to be inundated each year as soon as 2030 due to more extreme rainfall, according to the World Bank.

The city is sinking by about 2 centimeters (0.8 inch) per year, according to climate experts, and flooding in many parts of Bangkok is already common during the annual monsoon.

Devastating floods in 2011, that killed more than 500 people in Bangkok, reiterated the threat to the city, said Niramon.

“The 2011 floods underlined the importance of canals for flood mitigation and drainage,” she said. “The plan to upgrade them is part of a larger goal to regenerate Bangkok by improving mobility, the environment and quality of life, which can help strengthen the economy.” 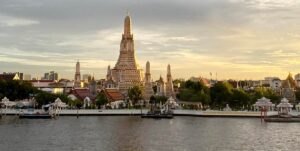 Streets cover 7% of Bangkok’s area, while water makes up 8%, according to UddC.

But of the about 1,200 canals, more than three-fourths are inaccessible to the public, with only about 70 kilometers (44 miles) of the network in use today, said Niramon.

UddC estimates that by upgrading and connecting 28 klongs, the network can expand to 700 kilometers, reaching the city’s main commercial and residential areas and integrating better with the expanding train lines and buses.

The BMA, which has proposed to develop five canal routes initially, is also adding fleets of electric boat taxis to cut pollution, emissions and noise, and entice more riders.

“The ultimate goal is to encourage more public transport ridership and reduce private vehicles on the roads, and the canals will be key to the plan,” said Pongsakorn Kwanmuang, a spokesman at the BMA.

“The canals are a part of the unique identity of Bangkok. Their revitalisation will also provide more public and recreational spaces for people, and help revive the communities who traditionally live along the canals,” he said.

It is still a fraught issue: an earlier proposal for a riverside promenade was halted by a Bangkok court in February after architects and environmentalists said it would worsen flooding and uproot hundreds of families reliant on the river.

The canal plan also fails to fully address the lack of last-mile connectivity, or actively discourage car use, critics say.

Niramon admits it is a challenge.

“We can’t make people do something just by saying: it’s good for the community or good for the environment. But with a little effort, we can make the canals appealing again,” she said. “In cities such as Amsterdam and Venice, canals are integral to everyday life in the city. Bangkok was once like that, and has the potential to be that way again.”

Featured photo of vendor on Bangkok canal by MustangJoe from Pixabay.

This article by Rina Chandran and Nanchanok Wongsamuth (edited by Zoe Tabary) originally appeared on the website of the Thomson Reuters Foundation. Reprinted here (with minor edits) by permission.