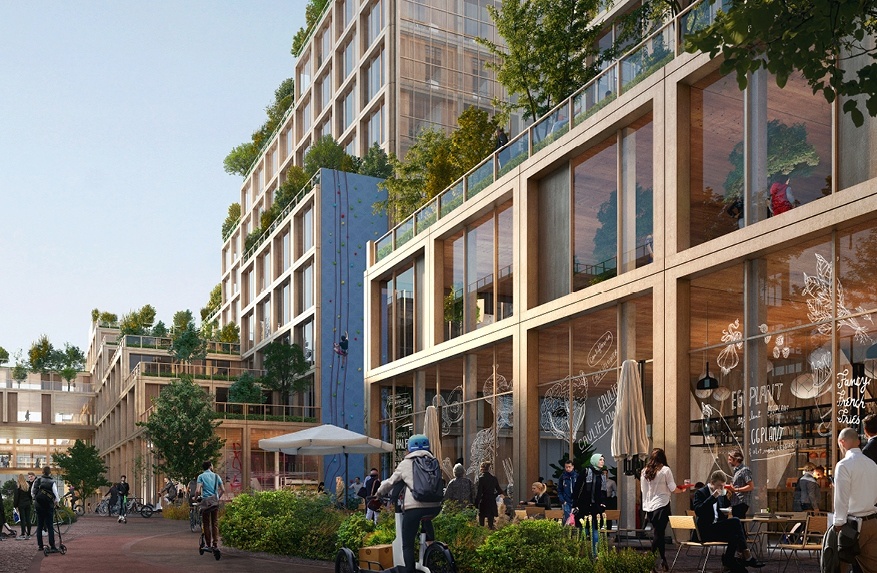 In Volkswagen‘s home city of Wolfsburg, Germany, an ugly downtown parking lot is being redeveloped and revitalized in a way that’s intended to set the standard for a more connected and livable European city. 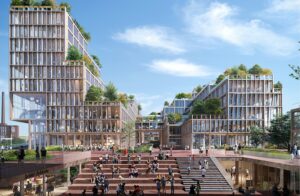 For Volkswagen, whose agenda-setting mobility technology research will be conducted in Wolfsburg, luring top talent to the area means not just offering the best workplace, but the most attractive place to live. It means creating the framework for a city as diverse as the talents and minds it hopes to attract.

“The first thing we hope to be able to do is remediate the soil sitting underneath all this parking, as it’s currently not particularly healthy (a process we expect will take at least a few years; it’s similar to the one that’s ongoing in our Vejlands project.) The bulk of new construction will happen on this section of the site. The rest of the interventions are much smaller in built impact, and are aimed more at facilitating pedestrianization, cycling, and public transit. (ie, reducing the amount of on-site parking, widening pavements to support more pedestrians, building more space for accessible nature in the city – not just median strips and traffic islands.)” 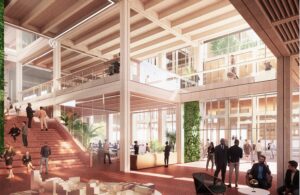 “Our goal is actually to reverse (or at least reduce) the urban sprawl that has defined Wolfsburg in the past few decades. It’s really a quintessential car city – naturally, as it’s home to Volkswagen – so in the past, walkability wasn’t necessarily the goal. It’s like so many cities across the world that really boomed in the mid-20th century. As for existing structures on site, there is an existing railway and bus station on site, both of which will be updated and slightly expanded to handle increased use of public transit. To the site’s eastern boundary sits the Phaeno Science Centre by Zaha Hadid – which we link up to, but will remain otherwise untouched,” she concluded.

“Together with Volkswagen, there is the opportunity to create a city that is the testing ground for the most cutting edge mobility technology in the world – but what underpins the design is the goal to create a place that people want to be in and stay in,” he added.

The range of mobility options results in a layered city fabric, tied more to the scale of the person than the scale of the car. Included within its bounds are Wolfsburg Hauptbanhof and an existing bus station, both of which are to be expanded in the new plan.

This mobility hub, known as the Campo, presents visitors with numerous mobility options: bus, taxi, city bicycles, and walking paths all fan out from this hub. 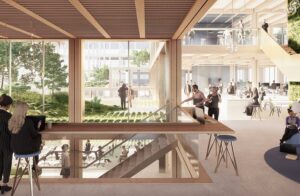 Ground level retail, tech, and creative workshops woven together with greenery and outdoor amenities create an active public realm throughout the day. Courtyards between blocks will be open public thoroughfares, creating an inside-out urban experience that rewards pedestrians and cyclists.

A few levels up, offices and residential program spread throughout the district and are crowned by roof gardens, decks, restaurants, and bars. The diverse mix of program creates a city that is alive throughout the day – even after commuters have left the cafes and innovation hubs for the day, locals fill the district’s public plazas and restaurants.

Henning Larsen was selected to design the project in a 2019 competition that included competitors UNStudio and Bjarke Ingels Group.