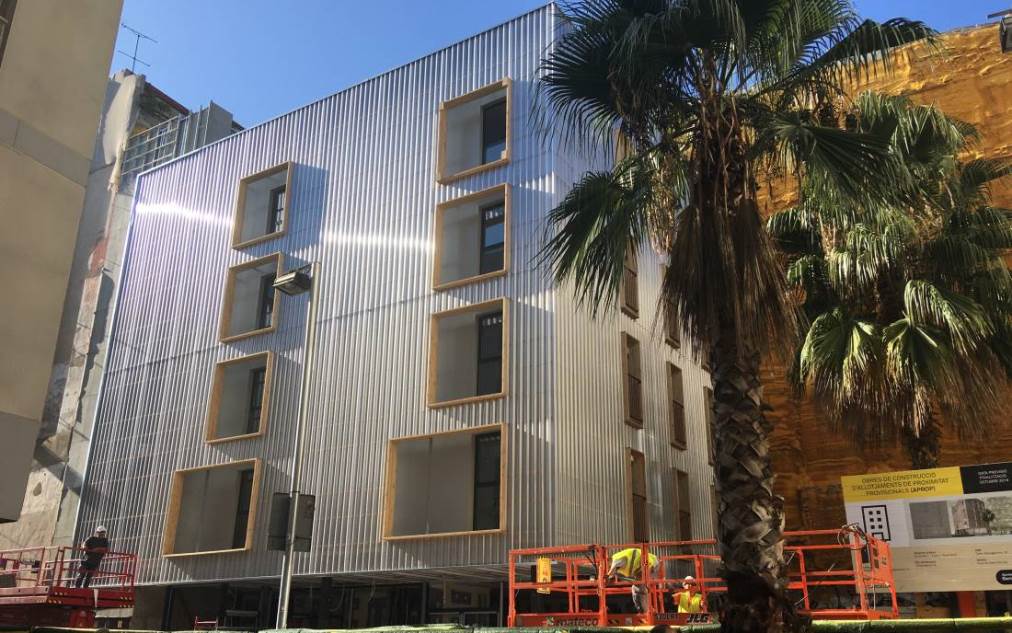 Down a cobblestone street a few meters from Las Ramblas boulevard, a vivid, contemporary-style building sits incongruously among the ancient churches and medieval squares that typify Barcelona‘s old quarter.

The minimalist structure is home to a dozen new flats built out of disused shipping containers, the latest innovation in Barcelona’s search for a solution to its ongoing social housing crisis.

Rising rents coupled with a shortage of public housing that stems from policies geared toward home ownership are putting pressure on Spain’s most vulnerable citizens, housing experts say.

“In Spain, you still have these ideological debates over whether it’s ownership or rental we should (focus on) – you need to tackle both,” said Sorcha Edwards, secretary general of Housing Europe, a network of affordable-housing groups.

“Even when (social housing) supply goes up the supply is not matching people’s incomes. So local economies suffer, families suffer,” she told the Thomson Reuters Foundation. “In the most extreme cases, you have evictions and homelessness.”

By turning to shipping containers, Spain’s second-largest city has taken inspiration from similar projects in places like London, Amsterdam and Vancouver, where recycled maritime containers have been used for emergency or social housing. (Note from Storm: Not all cities are smart enough “get” the concept of extending the life of existing assets by repurposing and renewing them. Some U.S. cities eager to join the trend—such as downtown Las Vegas—buy brand-new shipping containers, which undermines the whole up-cycling concept.)

“It is essential (for neighbourhoods) to maintain local residents because otherwise there will come a time when there will only be people passing through and almost no one living there,” said Rivera. “This impacts directly on the social fabric that has often sustained (people in) situations of vulnerability,” he stressed.

City Hall spokeswoman Rosa Diaz said that the shipping container project is one of several new ways the administration is trying to increase its public housing supply. “We are trying new types of projects that are sustainable … the need for mostly affordable housing is growing because prices have skyrocketed in recent years,” she said in a phone interview.”

Of those, three buildings – including the shipping container flats – are complete or nearly complete, and a further 13 are currently under construction, she said. 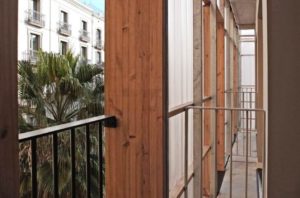 Social rented housing in Spain represents about 2% of the total housing stock, compared to the European Union average of nearly 12%, according to official statistics.

“Promoting affordable housing is one the priorities of the EU bank, both in Spain and in the rest of Europe … to promote inclusive growth and improve people’s quality of life,” she said in emailed comments.

She did not confirm how much of the funding had been used so far.

Under this model, which housing experts say is a peculiarity among European social housing models, tenants become owners of their property after a fixed period, explained Jaime Palomera, a housing researcher at the Autonomous University of Barcelona.

After that period, normally between 10 years and 30 years, the occupiers can sell the property at market prices, meaning often only higher earners can afford them, he added.

Some provinces have moved away from the model over the last decade or so, as critics say it is partly to blame for the dearth of social housing in the country today.

“It has not only contributed to the lack of social housing but has also raised prices for everyone,” Palomera said. 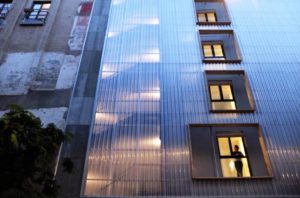 A woman looks out of a new emergency housing block built out of former shipping containers in Barcelona. Photo: Oihana Garcia, Straddle3

Construction on the shipping containers flats – the first of their kind in Spain – was completed in December and the first residents moved in a month later.

“I found some very well appointed, cosy and bright spaces,” said Rivera at Ramon Llull University, who recently had a look inside a few of the finished apartments. “In fact, if they didn’t tell you the flats are built from containers, you wouldn’t know.”

State housing organisation Aprop (an acronym which stands for “local provisional housing” in Catalan) built the one- and two-bedroom flats with three Spanish architectural practices, Straddle3, Eulia and Yaiza Terre.

The flats can be built and taken down quickly and can be adapted to any part of the city, explained David Juarez, a Straddle3 co-founder, over the din of drilling, as the final doors and windows were being fitted into one of the new flats.

But some housing experts say the container flats need to be built on a larger scale to make any real difference.

“This is a prototype (in Barcelona) and therefore what they need to do now is make them on a bigger scale … not just for people in vulnerable situations but also for young people and students,” said Palomera, the housing researcher.

To bump up its social housing, Barcelona is also looking to develop legislation that gives the local government first refusal when any building or land goes up for sale, said Edwards of Housing Europe.

The property could then potentially be managed through a model based on community land trusts, non-profits that buy homes, fix them up and then sell them at a reduced price while keeping the titles to the underlying land.

In addition, the city is working on a new legal framework that would incentivize non-profit affordable housing providers to operate there, she noted.

Although the container flats are only a “tiny part” of Barcelona’s strategy, Edwards said they represent “a welcome addition to the mosaic of policy measures that can be taken” to help solve the housing crisis.

Still, she added, the city has a long way to go. “Barcelona is really trailblazing but from a very difficult starting point … even with all the work they are doing they may not have an impact for some years,” she lamented.