Our cities deserve parks that transcend our nation’s divisions. This means we must be bold in their creation.

They have to be civil enough to convey the feeling of safety but not so restrictive that joy cannot be amply expressed.

They have to reflect both the diversity of a community and the beliefs and values it holds in common. 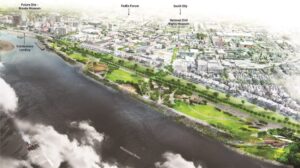 That’s why my city, Memphis, Tennessee, in collaboration with Studio Gang and SCAPE, is seizing the moment to remake the riverfront at one of the widest and wildest points of one of the world’s most storied rivers: the Mississippi.

At a cost of $61 million, the park is adjacent to downtown Memphis, which has experienced significant new residential and hotel development over the past decade. But just six blocks away from the park’s new entrance is Tennessee’s poorest zip code.

It is a painful juxtaposition, but it makes the park an unusually rich location to attempt what has become too rare in American cities: bring together strangers from different backgrounds and different incomes to joyfully share the same space at the same time. 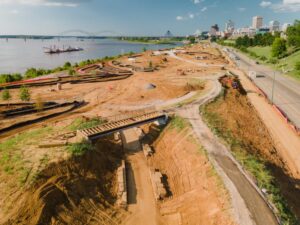 Many such parks have come under attack for their supposed gentrification effects. It has even been asserted that a good new park should never be planned for an underinvested neighborhood for fear of quality of life improvements driving up rents and real estate taxes (which, by default, suggests low-income neighborhoods should never get appealing new amenities.)

Some academics are putting forward the idea of “just green enough” as a goal for public parks in underfunded neighborhoods, as a way to achieve environmental remediation without gentrification.

Yes, it’s true that the “glamour” park can make a neighborhood more desirable, and thus may increase prices. But making a place more desirable, no matter how much its residents earn, is the point, isn’t it? The park is not the problem; the problem is failing to anticipate its impact, a response requiring civic mobilization on a number of fronts.

Further, assuming that such a park will lead to rapid gentrification may be true in fast-growth cities, but not in slow/no-growth cities, like my hometown of Memphis. Memphis faces a different challenge. The flywheel of increasing value is just beginning to turn, which is an encouraging sign. After all, if a city’s real estate is cheap, there’s a reason: lack of demand for the available supply.

Plus, Memphis is a majority-Black city, located in a county that’s majority Black, whose metropolitan area is largely Black. It faces a situation that is ubiquitous in America: in real estate values, majority Black neighborhoods are discounted by 23%, even when all other factors are equal.

For decades, Memphis has enabled sprawl and called it growth. Yet it hasn’t been growth, but simply development ever farther out that hollowed out older parts of the city, leaving in its wake people fixed in declining neighborhoods with few options to move. Renters were stuck in apartments their owners left to deteriorate because they saw no reason to reinvest, and homeowners couldn’t sell the homes into which they had put a lifetime of savings. Even their children didn’t want them. 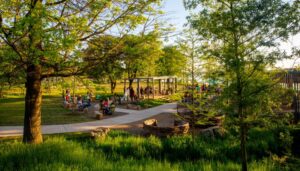 The River Garden, in Memphis. The existing park in downtown was used by the Memphis River Parks Partnership as a testing ground for Tom Lee Park. Both parks are under the aegis of MRPP. Photo by Selavie Photography.

This said, in Memphis, the task of creating desirability is much more urgent—and a whole lot tougher. We have to get people to see the potential of this city before its potential is fully realized. We have to attract attention to this lovely river city, to reconsider its potential. We have to make people fall in love with Memphis and other such cities again.

Can one “glamour” park in Memphis close that gap? Hardly. But if the question is whether our riverfront park, designed with great care and expertise, with the input of thousands of city residents, can make a measurable dent in that gap while serving the city’s poorest residents, I believe the answer is yes.

Ironically, in the 20th century, as Memphis was moving east, the city paid little attention to its riverfront, which was cut off from downtown by a high-speed four-lane roadway.

Other than the 1982 opening of a now-dated theme park built on a peninsula in the river across from downtown, the riverfront was overlooked and forgotten until the early 1990s, when the U.S. Army Corps of Engineers built a dike wall to protect the city’s bluff to the east and expanded the park to its current size.

Even then, Tom Lee Park barely qualified as a park. It was simply a set of pathways, along with a few benches and trees.

Its distinction was its magnificent views of the river and the fact that in 1954 it was named for a Black man, a local hero who, despite not knowing how to swim, saved 32 people from drowning in the Mississippi River. Needless to say, 65 years ago few Southern cities named centrally located parks after African-Americans.

Over the past few decades, one of the notable uses of the park has been as the home of a popular weeklong annual music and barbeque festival held every May. Those seven days are heartily enjoyed by those who can afford the price of admission—but the event leaves the park muddy, rutted, and bare for other Memphians who value it as a peaceful respite from the stresses of their daily lives.

As we work to revitalize the park’s grounds, this event has come to represent the inevitable tension between ticketed events and free park access. And as negotiations with festival organizers continue, I have to remind myself that this kind of conflict just goes with the territory. I know from experience that public space is never static, but always requires a constant effort to preserve.

However, hotly contested space is not the easiest place from which to begin the ambitious remaking of a riverfront that’s been on hold for almost a hundred years. And that brings me back to the idea of the “just good enough” park.

We read now that that signature parks ultimately harm low-income people by creating gentrification. But here in Memphis, we’ve seen that when an urban park has the appearance of disuse, it can also appear to be up for grabs. In that scenario of competing uses, too often poor people are the ones left out of the equation.

So why has the time finally come to build this truly transformative riverfront park? I’d say the national debates on who has the right to great public space, the removal of Confederate statues (and, yes, we had two on the Memphis riverfront), and the reconstruction of multiple nearby former public housing developments into “choice neighborhoods” all played a role, as did the spurt in development in downtown Memphis.

This convergence was amplified when COVID hit, and its confines made abundantly clear how valuable inviting public space is to urban dwellers’ ability to live life joyfully, even when our joy must come from the simplest pleasures, such as walking, fresh air, nature, and encountering other humans.

When the new Tom Lee Park opens in the summer of 2023, its ambitious design will make a statement right at the city’s front door that all Memphis residents need city parks located in places where they can imagine themselves going—places that belong to no one group of people, but to everyone. And we need to build great parks first as a quality of life consideration—let tourists and “economic impact” be a secondary consideration.

If we’re to succeed here in Memphis, we must have no hesitation. We cannot be timid out of fear of gentrification or charges of gentrification. The job is too hard. We must give it our absolute all because success is by no means assured.

This article is by Carol Coletta, President & CEO of the Memphis River Parks Partnership. It was originally published in Common Edge.