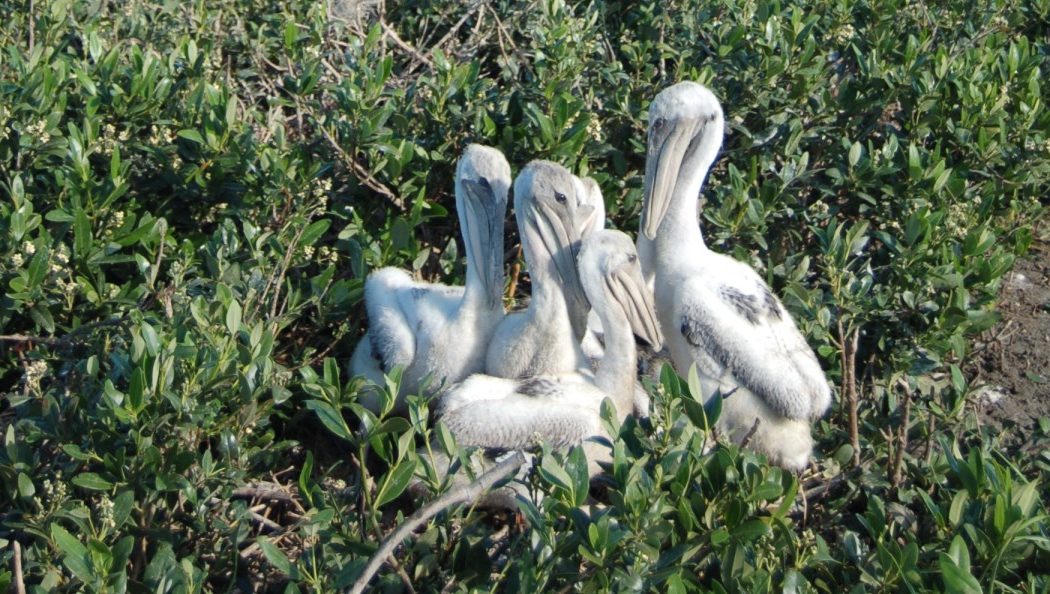 Standing on the shore of a remote island in Louisiana’s Barataria Basin, Louisiana Governor John Bel Edwards declared the newly-restored Queen Bess Island—home of the Brown Pelican—officially reopened for nesting. The traditional nesting season for pelicans and other colonial water birds begins in mid-to-late February. 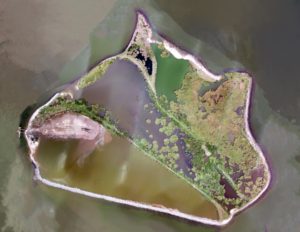 “I think they’ll like what we’ve done with the place,” said Edwards, touring newly-rebuilt land on Queen Bess Island, a major rookery for Brown Pelicans and other birds. “Before we started this restoration last August, only five of the island’s 36 acres were usable for nesting. Now all 36 acres are available, and we have plans to keep it that way for years to come.”

We announced the funding success of the project here in the June 1, 2019 issue of REVITALIZATION. Now, we’re happy to report the restoration success.

Queen Bess Island is located northeast of Grand Isle in Jefferson Parish. It is the fourth-largest Brown Pelican rookery in Louisiana, supporting 15-20% of the state’s total pelican nesting activity. 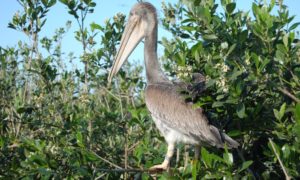 “The restoration of Queen Bess Island is an exciting achievement, and we thank Louisiana for its leadership of and dedication to this project,” said Mary Josie Blanchard–Director, Gulf of Mexico Restoration for the Department of the Interior. “Like the state, the Department is committed to restoring and protecting beach nesting bird habitat on Queen Bess Island. We look forward to continuing our work with Louisiana, the other Trustees, and many other partners to complete additional restoration projects across the Gulf.”

The island provides a crucial nesting habitat for four species designated as Species of Greatest Conservation Need in Louisiana. This project will enable these species, who were among those most impacted by the Deepwater Horizon oil spill, to continue nesting here well into the future. 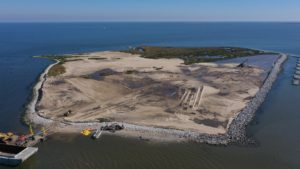 Queen Bess Island has historical significance for the Brown Pelican, Louisiana’s state bird, which disappeared from Louisiana’s coastal wetlands by the mid 1960’s, primarily due to the now-banned pesticide DDT.

In 1968, the Louisiana Department of Wildlife and Fisheries (LDWF) began restocking Brown Pelicans to coastal Louisiana and Queen Bess Island was chosen as the first reintroduction location. In 1971, 11 nests were documented on the island, marking the first sign of the species’ successful recovery in the state.

CPRA Board Chairman Chip Kline thanked LDWF and the federal Dept. of the Interior for a great restoration partnership made necessary by the Deepwater Horizon oil spill. 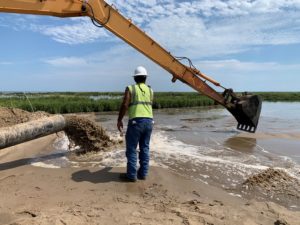 “The island was already slowly deteriorating, but the effects of the oil spill were catastrophic to the site,” said Kline. “The images of oiled birds and miles of marsh along our coast are difficult memories. But today’s restoration announcement is a testament to what can be achieved through partnerships, dedication, and hard work. With the help of our Governor, CPRA, LDWF, the U.S. Department of the Interior, and the Louisiana Trustee Implementation Group, we have achieved what you see here today, and we look forward to welcoming our state bird back home.”

The restoration of Queen Bess Island involved enhancing an existing rock ring around the island to serve as containment and protection for the sand fill material placed to increase the island’s elevation.

On the southwestern side of the island, a set of rock breakwaters just offshore create a lagoon-style nursery feature for the young birds to learn how to swim, preen, and feed. 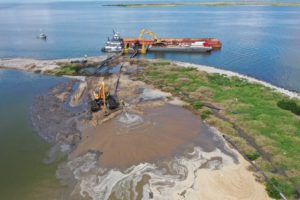 The island is now highest on its southwestern side, approximately four feet above sea level, gently sloping toward the northeast where intertidal marsh elevations and an enhanced tidal exchange gap will support the growth of black mangroves and other fish and wildlife habitat.

A nearby breakwater will reduce wave-driven erosion through the gap.

In the middle elevations, scrub-shrub vegetation will be planted to support Brown Pelican and colonial wading bird nesting. The southwestern third of the island is designed as habitat for birds that prefer nesting on the ground. For such birds, including terns and skimmers, six inches of small limestone are being placed on top of the sand fill to inhibit vegetation growth. 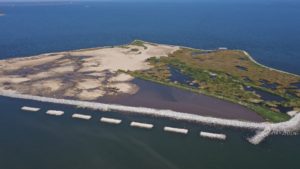 “It was on this very island in 1968 that we began the process of bringing back the Brown Pelican after pesticides nearly wiped the species from the Louisiana landscape. Now we celebrate the birth of a healthy home for Brown Pelicans and many other bird species because of the marriage of science, wise planning, and the determination of state and federal governments to do the right thing,” he explained.

Once the material in the lower elevation portion of the island has settled, it will be planted with black mangrove. The scrub-shrub vegetation planted in the middle elevations may need to be supplemented in future years.

Small limestone serving as bird ramps will be placed around the island to provide flightless juvenile birds with safe and easy access to the water.

All photos are courtesy of the CPRA.