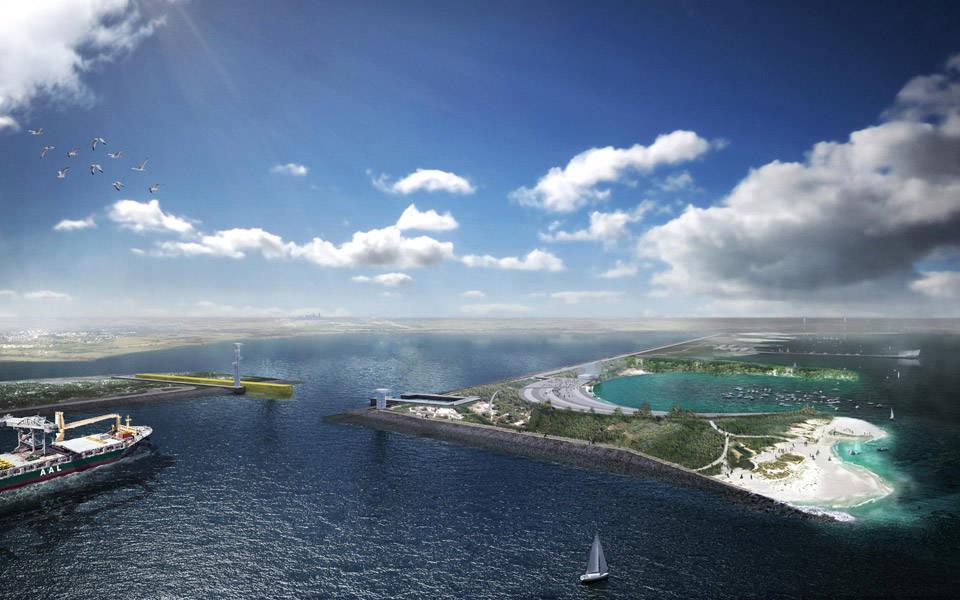 With more than 80% of world trade volume carried by sea, ports are crucial infrastructure for providing everything from food to fuel, electronics to cars. As we have seen with the disruption of supply chains during the COVID-19 crisis, one compromised port can have far reaching consequences.

Port cities around the world are threatened by climate change, from sea level rise to hurricanes and storm surges. The current global cost to protect all ports is estimated to be up to US $205 billion by 2100, and yet the reduction in global trade without this investment would be worse.

Now, one of the largest green infrastructure plans—which could become a model for ports around the world—is emerging from Galveston Bay, Texas.

According to a recent study of US ports, only ten out of 300 have developed a resiliency plan. A 2016 report concluded that few ports around the world are prepared for sea level rise, powerful hurricanes and large storms surges.

The current global cost to protect all ports is estimated to be up to US $205 billion by 2100, and yet the reduction in global trade without this investment would be worse.

Given the slow response of most national governments to secure ports, locally driven solutions are starting to fill the void. And these solutions tend to be more innovative and less costly while providing protection as well as local amenities.

From the Port of Tallinn in Estonia to the Port of San Diego in Southern California to the Port of Houston on the Texas coast, a handful of ports are creating public-private collaborations to combine green solutions with more traditional hard infrastructure that is the go-to approach for most national governments. 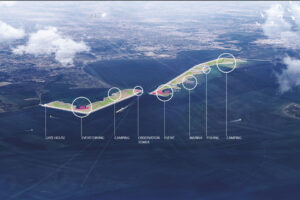 One of the largest green infrastructure plans that could become a model for ports around the world is emerging from Galveston Bay, Texas. Galveston Bay and the Houston Ship Channel are home to one of the largest oil refining and petrochemical production complexes in the world, contributing more than 13% of the United States refining capacity, a large share of jet and military fuel, as well as more than 25% of the production of key chemicals such as ethylene and propylene. There are over 4,000 oil and petrochemical storage tanks along the Houston Ship Channel and thousands more in the surrounding area.

Rice University’s SSPEED Center in Houston (severe storm prediction, education and evacuation from disasters) calculated that a direct hit of a category 4 hurricane would be devastating, causing the worst environmental disaster in United States history. What’s more, it would severely threaten national security as well as the regional and national economies due to the loss of the refining and chemical production from the region. With more than 800,000 people living along the bay’s western shoreline subject to significant surge flooding, the loss of life and environmental degradation would be staggering.

What the US government has proposed is for the Army Corp of Engineers to build a barrier and gate system in the Gulf of Mexico. This is certainly needed. The project, the largest environmental engineering development in US history, will take two decades to build and is estimated at $31 billion. And yet, the current plan would not provide protection to the upper bay should a CAT 4 or larger storm make a direct hit. Entire communities would be severely damaged by flooding and contamination caused by the surge into the petrochemical facilities along the bay and the connected Houston Ship Channel. 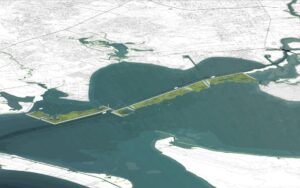 The Ship Channel at the Houston port will be widened to safely accommodate larger ships as they move in and out of the bay.

To address this, the SSPEED center launched a storm protection initiative that has evolved into the Galveston Bay Park Plan – a robust, locally driven public-private collaboration that promises to be the largest green infrastructure project in the US.

The Port of Houston Authority, the City of Houston, Harris County and Joe Swinbank, a Houston entrepreneur, have funded a new study to determine how to get the project ready to start the permitting process.

The SSPEED Center at Rice University team includes Rice University, Walter P. Moore, an international consulting engineering firm; and Rob Rogers, an urban designer and architect who developed the “park” vision for the plan along with a host of other universities, specialists, environmentalists, economists and other contributors to the plan.

The Galveston Bay Park Plan is a straightforward, pragmatic, and economical idea. The Ship Channel already needs to be widened to safely accommodate larger ships as they move in and out of the bay. Opening the channel from 700 to 900 feet will produce substantial amounts of dredged material, including a lot of virgin clay that is appropriate for molding a surge barrier along the Houston Ship Channel.

Instead of dumping the dredge materials at significant cost, the plan would use it to build barrier islands and develop them into a massive public amenity – a 10,000-acre park, restored wetlands, and new oyster reefs – while protecting people and industry for decades to come. The Houston chapter of the American Institute of Architects named the plan a Regional Vision winner.

This multi-stakeholder-led initiative has secured funding from the City of Houston, Harris County, the Port of Houston, and Joe Swinbank for the next phase on the Galveston Bay Park Plan: Work that will seek to confirm initial project construction costs estimated at $3-$6 billion.

While the Army Corp of Engineers‘ plan will provide general protection, the Galveston Bay Park Plan provides safety for the upper bay through a locally driven public-private collaboration.

The Houston and Galveston Bay Region is not alone. To achieve real protection against the growing risk of monster hurricanes, local governments must become more creative and increase cooperation with the private sector. The Galveston Bay model of expanded responsibility may be the path for many ports.

This approach is not only feasible, but also demonstrates how port infrastructure should be built in the 21st century: do more with less, provide public amenities, and involve all stakeholders, especially those with skin in the game.

All images are courtesy of Rogers Partners.