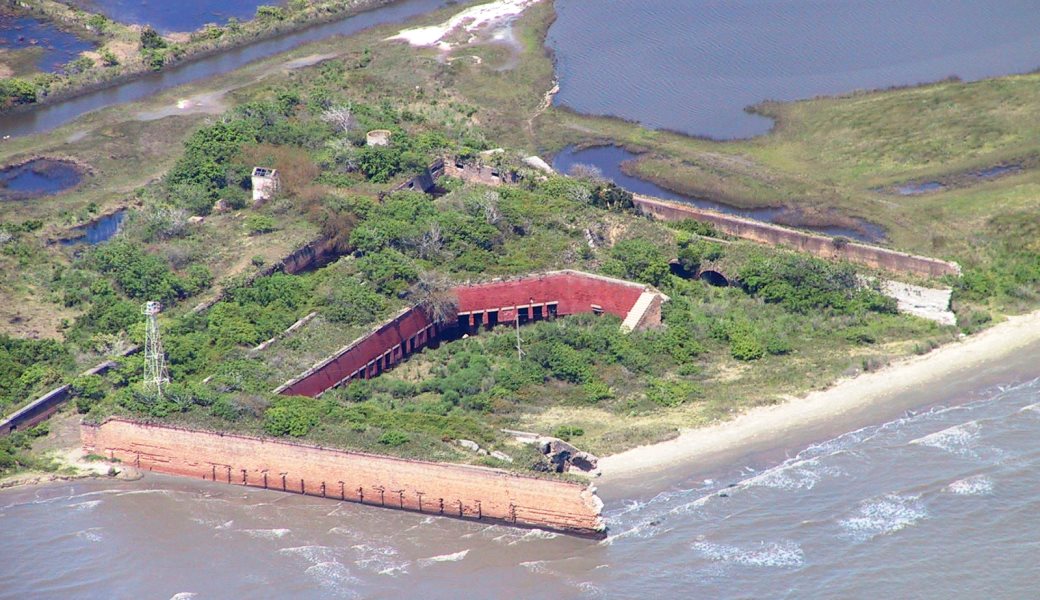 On July 26, 2022, the Louisiana Coastal Protection and Restoration Authority (CPRA) announced the completion of the West Grand Terre Beach Nourishment and Stabilization Project.

“Barrier island restoration projects like this one are a linchpin for rebuilding our coast,” said State Rep. Joe Orgeron. “They provide the first line of defense from hurricanes and increase the effectiveness of inshore efforts designed for the protection of our citizens.”

West Grand Terre previously served as the headquarters for pirate Jean Lafitte and his crew of Baratarian privateers before the federal government cast them from the island in 1814.

Construction of Fort Livingston was halted at the start of the Civil War and never completed, but the fort still stands and is listed on the National Register of Historic Places.

“Since its creation, CPRA has restored over 60 miles of barrier islands and berms,” said CPRA Chairman Chip Kline.

“These projects are not only ecologically important, but are vital in providing better storm surge protection to those who call South Louisiana home. Those barrier islands that protect the southern flank of the degrading Barataria Basin, like West Grand Terre, keep over 1 million residents in Plaquemines, Jefferson, Orleans, St. Bernard, and St. Charles parishes safer,” he explained.

The $100 million effort restored approximately 251 acres of beach and dune and 147 acres of back-barrier marsh on the island. Additionally, rock revetments were constructed to protect the newly restored marsh from wave impacts and storm surge.

“West Grand Terre’s proximity to Grand Isle and previous use as pirate headquarters make it one of Louisiana’s most recognizable and historically significant barrier islands. The completion of restoration efforts marks a win for all,” he added.

“I applaud CPRA’s efforts to restore our critical barrier islands,” said State Sen. Patrick Connick. “These islands are part of a holistic approach to protection, which emphasizes the importance of strengthening the barriers between the Gulf of Mexico and our inland regions.”

Nearly 4 million cubic yards of sediment were dredged to restore beach, dune and marsh habitat on the historic barrier island.

Local leaders joined in celebrating the completion of the large-scale restoration.

“The completion of the West Grand Terre Beach Nourishment and Stabilization project is welcome news and we want to thank the Louisiana Coastal Protection and Restoration Authority for their commitment to projects like these, which are critical in helping address our significant shoreline erosion and marsh subsidence,” said Jefferson Parish President Cynthia Lee Sheng.

“This project is also vitally important to protect some of our most vulnerable areas from storm surge and to also secure one of the State’s most valuable assets,” she continued.

The design phase of this project was funded with RESTORE Act funds, with construction funded by the Louisiana Trustee Implementation Group (LATIG) with Natural Resources Damage Assessment (NRDA) funds.

2002 aerial photo of Fort Livingston ruins is by Edibobb via Wikipedia.